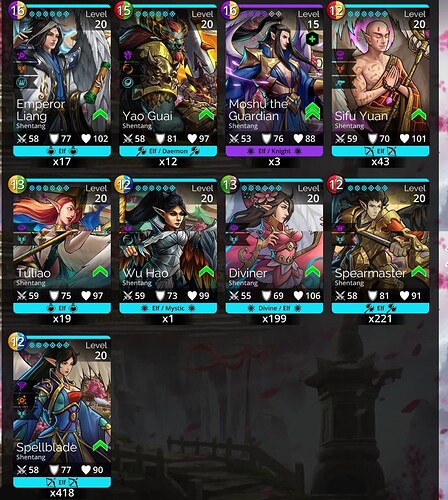 Not an issue in this case.

There are way worse classes/troop selections (though I get it, of course - being that limited is always awkward).

And Wu Hao still has the most redundant traits.

the redundant traits are working as intended

As if we needed any further confirmation that this company’s staff do not play their game.

@AMT the tiny thoughts and effort put in to pretty much every new released troops tells it all.

As if we needed any further confirmation that this company’s staff do not play their game.

Nah, it’s just further confirmation that they don’t even bother to read the question.

A New Mythic Approaches – The Gemini

The Gemini will be the only Mythic Troop available in Glory, Gem, Guild & VIP Chests for the next 7 days.

They will also be available in Ghulvania Event chests this weekend until weekly reset.

Just gonna leave this here, as evidence of how much this company cared to improve the relevant (mis)communication that was at the root of Weavergate.

thanks for that proof saving, right now it is corrected.
but still wrong in ingame posting 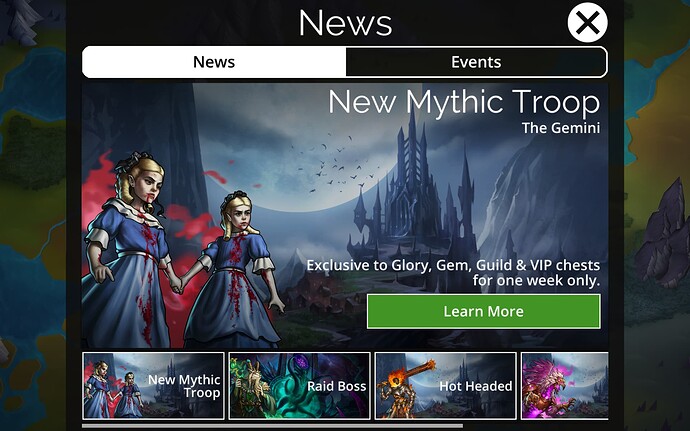 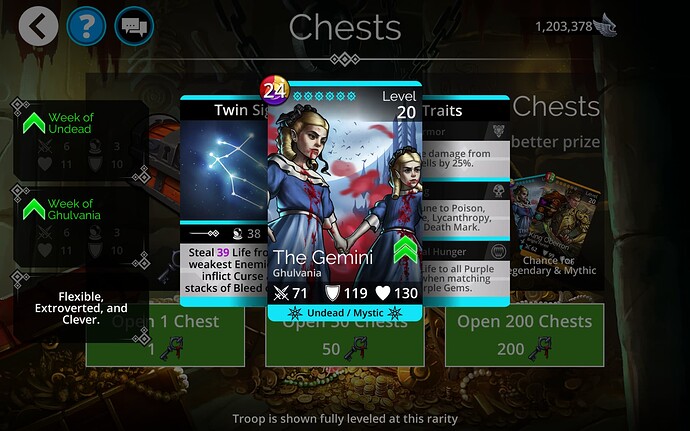 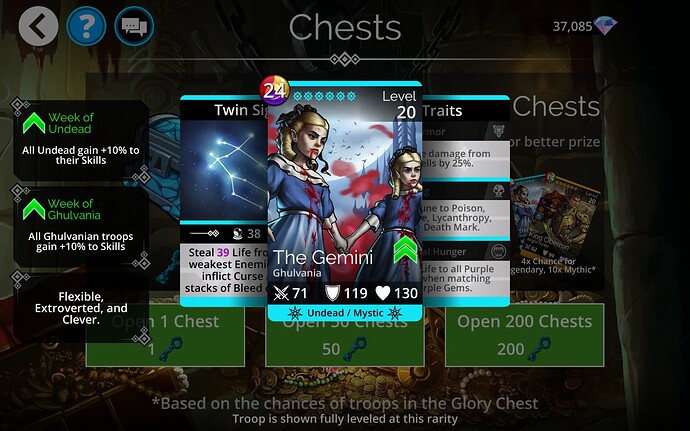 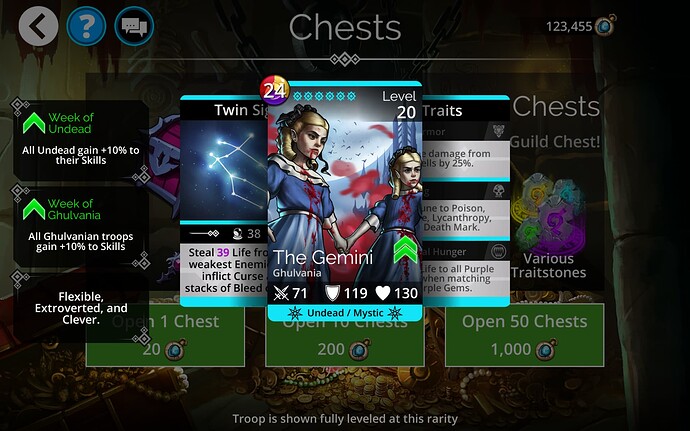 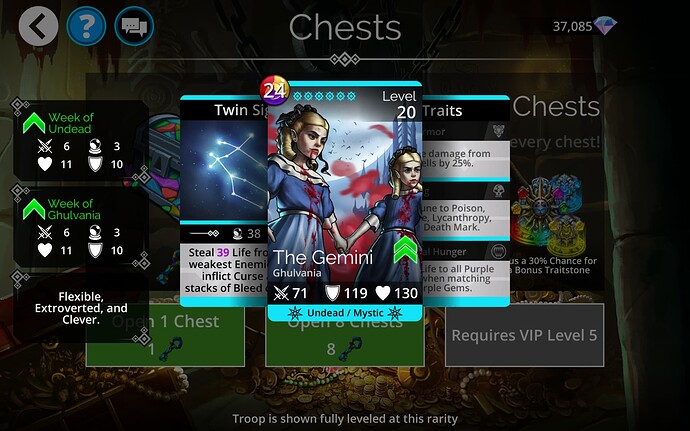 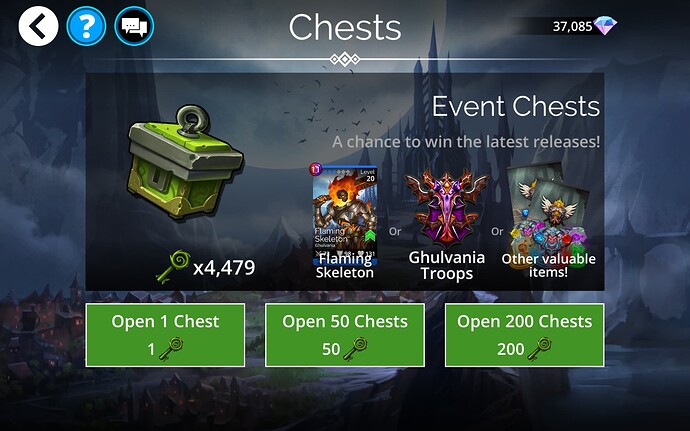 All potions missing from Faction Assault shop - stealth nerf or bug? Platform, device version and operating system: Steam + Android Screenshot or image: [image] What you were expecting to happen, and what actually happened: Expecting to be able to buy potions in the faction assault event shop. How often does this happen? When did it begin happening? Just started on Tuesday Faction assault 14/6/22 Steps to make it happen again Enter shop

Hello everyone, I have an update on the Fang Moor Potion issue. The team has disabled the Faction Assault shop for the rest of the event. We’ll be processing a refund for the Gems players have spent purchasing the Tiers in the Faction Event. The development team is currently working on getting this out. Once the refund has been issued a new Fang Moor Faction Event will be made with the potions from the shop working. We’re sorry for the issue that happened and thank you for your patience whil…

As expected, no Mod was available after office hours to try and assist with the issue, so things kept getting worse until the next working day in Australia.

However, once they took note of the problem they acted swiftly to disable the bugged shop (undoubtedly not an optimal solution to all players, but likely to be among the best damage-control options, second maybe to extending the Faction Event for an extra day with the bug resolved), and clearly communicating that there would be a refund and a rescheduling of the event.

Just providing a quick update on this. As some of you have already commented the Gem refund for the Fang Moor Faction has been sent out today.

The new Fang Moor Faction Event with the Potions working will starting tonight at daily reset. This will be happening along side Hero Class event as well.

Thank you all again for your patience on this issue while the development team worked to get this fixed!

And a new event efficiently scheduled within 48 hours of the original issue.

Roughly a month ago we hired additional staff who specialize in server and database management and they have been working on getting up to speed and had already started work on server and database optimisations. We have also increased our server capacity to handle the larger server demands we’ve been experiencing. The team has also been investigating and addressing the issues caused by the servers and database that the community have specifically pointed out and reported to us with many fixes and improvements already have gone live over the past 3-4 weeks. Moving forward we have team members who are currently 100% focused on the additional issues we’ve

On a positive roll: another instance of a Mod sharing detailed information in a professional manner, which helps customers stay informed as opposed to the radio silence/opaqueness experienced in the past.

You missed the pet issues, where they did not know the behaviour of their own code

While waiting for the eventual proposed resolution by IP2 on the ongoing Vault/Battlecrasher issue, just documenting some noteworthy points.

When reports started coming in ( [Reported] 10th crown of the day doesn't appear ), a mod commented that…

I’m not aware of anything we’ve done that would drop the Kingdom battlecrasher spawn rate too low for #10 today vs any other day.

…even though a similar situation happened before and was allegedly ‘fixed’:

Hello Adventurers, We have investigated the reports that the Vault event is reducing the chance of a Kingdom Pass Battlecrasher appearing (especially for 9th and 10th encounters with him). We have released a fix that should improve the chance of him appearing while a Vault Event is running (though there will still be some RNG that may make is seem like he has a lower chance than before).

And then we’re left with this:

Assume it’s working as intended unless you see me pop back in this thread.

If anything IS wrong the team will fix it, I may just be slower on the communicating that back to you if I don’t see the ping (need to go afk to grab dinner)

They haven’t popped back in the thread, so either it’s working as intended, or that’s a very long dinner.

In the meantime, neither of the 3 mods have been online for at least a day, therefore once again demonstrating how much customer frustration/satisfaction matters outside of office hours (unless of course there’s a shop issue, which gets resolved promptly so customers can keep spending)

…even though a similar situation happened before and was allegedly ‘fixed’:

Just to drive this point home:
I’m a computer programmer analyst by trade. If I say something is fixed, I make damn sure it stays that way through subsequent levels of testing. If the same bug happens again in production, it’s not pretty.

We can see what they come back with next week. They can have some rope because, to me, it sounds like they never found the root cause and just boosted the spawn rate temporarily. However, they NEED to be documenting these things. That was the #1 point drilled into us at college.

I’m not denying there’s problems with the text and I’m certainly not accusing anyone of lying. I’m just saying in a round about way that it doesn’t matter who translates it there will be mistakes because humans aren’t perfect, even with spell checkers and grammarly.

The best process is for CX to report issues with the text when they appear and that feedback to be passed onto the translators to be fixed. Then the whole thing is all of us learn from our mistakes right? Better to have someone experienced who makes mistakes and learns from them than to hire someone new who hasn’t made any mistakes yet and start the process from scratch. I’d also point out that it’s not a one person issue, I don’t feel it’s constructive to call out single people and blame them for it. It’s inaccurate to blame people without knowing who wrote the mistake into the text and also pointing fingers doesn’t actually solve the problem at all.

I will raise the translation issues with the team again to try to get more attention on them.

I think we should try not to derail this thread any further though. I’m happy to continue the discussion in a translation specific thread, but just a disclaimer, try not to criticise people in your posts. If it gets personal it will be against the community guidelines. Always happy to take feedback about game things though.

Just gonna keep this here before it gets edited any further, for reference if needed the next time the Translations issue cycles in.

we are listening to the feedback being shared

Hopefully it will include the “no duplicate dragons from the first 6 Gem Dragon Eggs” part, which is another demoralizing issue designed into your pipeline.

The above was on 2nd September, and now on 5th September we get the first reports of:

My first Jewel dragon and its not okay 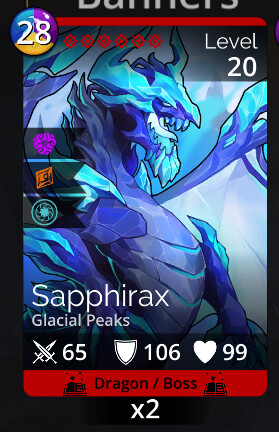 This is insane! Korean random!

…in the meantime, advising my guildies to stick to a single craft at most wherever possible.

The week between crafting.

When crafting a Gem Dragon egg, each Dragon has the same chance to be created but if you have already crafted one of them, this does not prevent you from being able to craft a second.

This feedback has been passed onto the team and we do have plans for these Gem Dragons in the future! But this is working as intended currently.

At least a mod acknowledged the issue

Just keeping this here before it gets edited any further