I’m someone who opens my mouth before my brain has finished processing and it’s the same with posting to the forums, I edit as my brain keeps processing

Hello Adventurers, Thank you for all the feedback that you have provided around the Dungeon Rework that was released in update 6.5. We’re taking that feedback into consideration and we’re happy to share our current plans with you. Dungeon Doors The door randomizer had some detectable patterns. We have changed that so it is truly random. Kudos to the Adventurers who spotted this, but sadly those patterns will no longer be there. We will be sending out some Dragonite to everyone as compensatio…

I remember the feeling when I first realized that the players tend to work for the playerbase (often selflesssly and almost always harder than IP2 ‘TGIF’ staff), while the mods tend to be against said playerbase (this was unequivocably reported to the dev team by the mods, since it is well documented that devs do not check the forums): so we had players developing methods and tools to help players navigate the terrible dungeon design within the parameters given, but mods wouldn’t have it.

You’ll likely come to expect this from them, and adjust expectations accordingly.

Just gonna leave this here before things get edited/deleted.

Here’s where the playerbase worked together to help each other navigate IP2’s terrible design:

Due to IP2’s programming record, I will be using this thread to post fully revealed Daily Dungeons for the foreseeable future, and welcome anyone who may wish to share theirs in the odd chance that IP2’s randomness is not ‘working as intended’.

This thread no longer needs to exist, right?

We now have direct evidence that the Devs can fix issues immediately, if inspired adequately.

Y’all simply need to reframe “problems” or “broken features” as something that benefits the player.

agree, nothing about: “this will take some time, cause it is a server issue” or “we will look into that problem”.
showing their real face again…

Even if they are claiming they are using a native German speaker to do the translation, you all also understand that that is not very likely. They will never understand these in any language since they can’t in English.

It is not unusual for the authority granted (as opposed to ‘earned’) to moderators to become a tool to justify their personal preferences/shortcomings. It happens in most environments, both online or offline,

i think we should test this.
everyone make me absolute ruler of the world, and then let’s see if i abuse that power.

we should test this

We just did yesterday for the umpteenth time: the playerbase got the short end of that stick again, with the usual patronizing, promises, and TGIF…

Player (sls) got banned from forum for no reason

[grafik] Here the link to his messages. Feel free to find something that deserves a ban:

Just gonna leave this here, with the reminder that sls was pivotal to the existence of the tool that helped so many players tolerate the New Dungeon Design: a tool that simply displayed probabilities based on the rules programmed by IP2.

Assess at will, and remember the next time IP2 wants some $$. 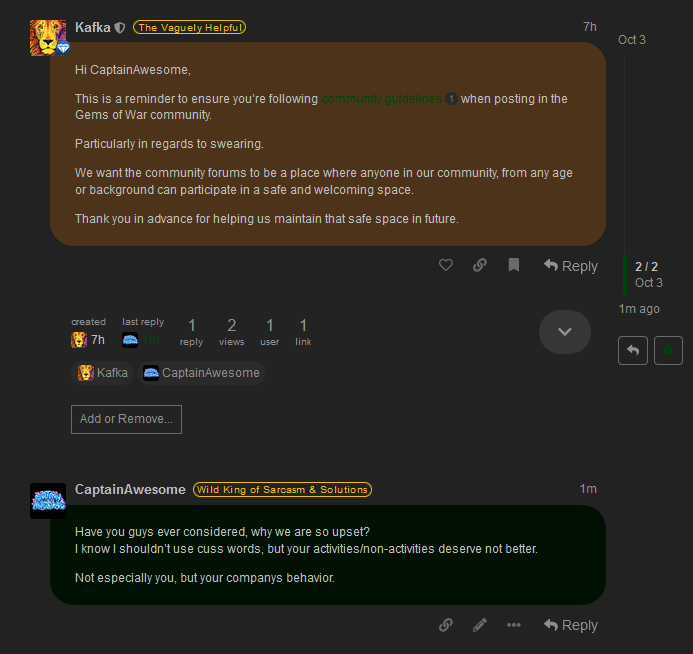 just to keep it updated here too

Player (sls) got banned from forum for no reason

I’m going to close this thread now as we don’t publicly discuss other user’s bans.

So I went through the documentedly selectively enforced guidelines, and nowhere did I find that players cannot discuss bans among themselves in forum: by ‘we’, they meant mods/cx/whatevertheywannacallthemselves?

Either way, locking the thread is quite aligned with recent actions aimed at the playerbase though…

Your post was flagged and removed as it was Off-Topic to the initial Bug being reported.

I have let the team know that Salty’s profile is still linked to the moderation responses, and we will look to get that changed as soon as possible.

I think this kinda says it all.

A non employee cannot be used in any judiciary against players. Yes my post was in the wrong thread and that was my mistake. To be using a non employee to warn players of such things is probably illegal.

This company continues to use salty as a mediation when mitigating situations that the post she long ago holds require mediation. There is no doubt they do this without her consent which means she has significant grounds for legal recourse and huge compensation. Those of you who remain in contact with salty should provide knowledge that her name and previous status is being abused by a company that still uses her name to curb unsavoury behaviour.

Thanks for your patience this week waiting for a follow up from the team here.

We want to provide you with more details about the Dungeon RNG fix.

We actually thought the tool that was created to predict the doors was awesome and speaks volumes about how passionate and inventive our community creators are. It was disappointing to us that this fix was going to affect that tool. I believe it was @sls who worked hard on the tool itself with all the data the community provided - seriously kudos to sls and everyone else who contributed and I’m sorry this change has been so discouraging to so many who were involved in that project and used it.

It was necessary that we fix the broken RNG in the Dungeon though, because we told everyone the doors had equal chances for everything, and the overwhelming majority of our players (tens of thousands of Adventurers) don’t use any external tools or even read the forums, community discord servers or even our help center despite links in game. So they didn’t have access to the same information and this feature wasn’t working as intended or announced to everyone.

A very common strategy when it comes to random chance selection is to choose the same doors every time because eventually your chosen combination will be successful. So if you were one of the players who would choose a combination of Doors that was affected by this bug, your chances of getting a perfect run were significantly reduced - and that’s just not fair.

This fix wasn’t about punishing you folks, you’re some of our most passionate community members.
It was about making sure people who love playing the game but who don’t participate in the community wouldn’t be punished for not participating outside of the game.

The RNG for the Dungeon Doors is referred to as the ‘Door shuffle code’.
We have a list of 6 possible outcomes when opening the Doors:

The intent of the Door shuffle code is to take this list and shuffle it into a new list in a random order each day for each user.

There was a bug in the Door shuffle code that caused it to skip the source at the index of the target slot, so when it was working out target slot index 0 (Door 1) it ignored source index 0 (Low Boss battle) etc.

I wanted to touch on the feedback about wanting pity Dragonite for not getting perfect runs a little as well.

When we design a feature we include “space” for our designers to work into later. ie. so you have room to improve on or add to a new feature based on user feedback, game data and cool new ideas we might have. This is a hugely important factor and we adopt this for every new feature we introduce. For example, remember when we introduced our first Treasure Gnome and didn’t give it all the resources or huge amounts? Because we later released all the other Gnomes we currently have in game and Gnome-a-palooza

Also, Dragons are mid to end game collectibles, they’re designed to give players a long term goal. Some of you already have 6 Dragons after only 5 weeks - you are speed racers! This is why the economy balancing in this instance is also important, if we give too much Dragonite it will cause the Dragons to become early and common collectables and we really wanted them to be more special than that.

Just for safekeeping purposes, including particularly:

There was a bug in the Door shuffle code that caused it to skip the source at the index of the target slot, so when it was working out target slot index 0 (Door 1) it ignored source index 0 (Low Boss battle) etc.

Screenshot_20221007-0923270151080×2448 165 KB
Just gonna leave this here, to hopefully nudge some mod apologists: 3 day suspension with no warning nor explanation given, no apparent deleted posts that may contain ‘insults’, and a history of years of basing my comments on documented facts while avoiding ad hominem (unless recent Dungeon RNG Fiasco facts are perceived as ‘insulting’?)

Coincidentally though, I did use the word ‘petty’ in a private message conversation with another player a couple of days before the suspension, so worth noting that they may not be as private as the name suggests.

Makes you wonder who else is getting banned without the ability or desire to speak up. Guess I’ll get banned too for replying to a thread mentioning a ban that, like other bans, doesn’t even bother informing the player what post or word/s offended CX.

Not that it matters - they’ve already killed off their Twitter, Twitch and YouTube. Subreddit’s also in its death throes. Forums? No biggie for CX if they savaged the last remaining community holdout too - I guess.

RE: private messages, I expect if the other forum member reported the message (ironically demonstrating the validity of your choice of adjective), mods could then read it. If that were the case, nothing suspicious there. Other than a suspension for the mildest “insult” ever.

the other forum member reported the message

Virtually impossible, since they are a class act and the adjective wasn’t referring to them…

Just gonna leave this here before it gets edited.

Lies? Ignorance? Oopsie?: whichever you decide to believe, it’s worth remembering how much a statement by an IP2 staff can be reliably trusted.

The bug report was also immediately labeled “Not a Bug”.

I’ve brought up the fact we said we’d be making a change to effect Cursed Gnomes specifically which requires a bit of a rework of the Vault event.

I’ll post here when I have more information. It may not be today as we’re prioritising the asset downloads, red map flash and missing buttons when playing in 4:3 ratios and on tablets issues first.