No 10th King Heliodor on Switch during Vault Weekend!

Feel free to add your own upcoming bug reports here

Are we gonna see the update or the preview before the weekend ?

Upcoming bug report
Not getting cursed gnomes on switch anymore. Where did they all go?

This is also happening on Xbox

We will pop in to keep an eye out for any urgent bug reports during the holidays.

You should clarify that this only applies on what YOU or YOUR TEAM classify as “urgent”.
We’ve seen that “nothing” will happen in the past… Empty promises.
Example: [Reported] 10th crown of the day doesn't appear
Just to clarify from the side of the PLAYERS:
It is not “enough” to do a quick post, not even recognizing the existing problem and to then just “wait it out”.

…but enjoy your well deserved holidays

You should clarify that this only applies on what YOU or YOUR TEAM classify as “urgent”.

Fixing dungeons and dragonite before your time off?

@Kafka Even if no one can open the game, don’t rush. After all, it is just a game. And a lot of people could probably use a break from it, so they appreciate what they have here again instead of just complaining about what they think they don’t have.

Enjoy your time off!

That’s so confusing, I wonder what you’re referring to.

I believe most of these are due to Infinity Plus Two observing Jewish holidays, there’s a number of those in Sept-Oct where work is not permitted. I forget why they do that, I think it was something about a parent company requiring it?
Only a couple of the days off are because of Australian holidays.

Hmmm, us ‘true subjects’ (sic), have no public holidays in October.

Not just Australia. Other commonwealth countries are celebrating Queen’s birthday too. In the UK, they observe it too 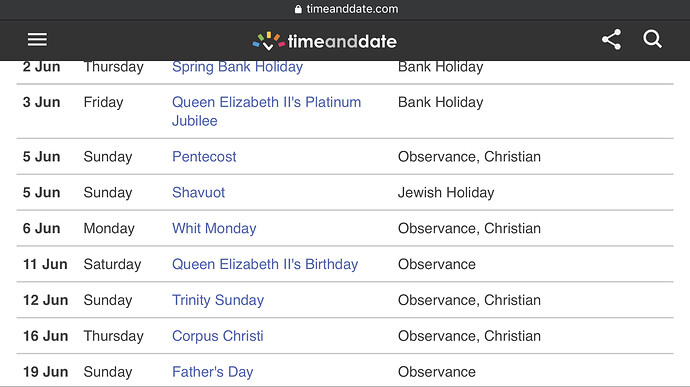 This witty reply would carry far more weight if there weren’t an absolutely ridiculous number of bugs that apparently are just part of the game…that no one apparently can fix…that completely remove strategy and replaces it with luck… usually that’s bad. Save your sarcasm for the time when your game is working properly…oh wait…I see the problem…you would never be able to post again.

Well, not 100% sure, but doubtful that anybody posting in this forum has any influence on that matter.

In the sentence above I was talking about the possibility of imminent nuclear threats.

…Sadly often it seems like the same could also be stated on the dragon part.

As a jewish from Israel, I can confirm:
25-27 September is Rosh Ha’Shana,
4-5 October is Yom Kiffur
9-10 October is Sukot
16-17 October Simhat Tora
I can assume they have jewish employee in their team

Sorry about the notification but I wanted to tell all of you to enjoy your holidays!

@Kafka
I messed up the reply thing

Why are you here, writing comments on a forum then?

I can’t influence what the insane dictator does. Just trying to live my life as long as I can.

That does include gaming and talking about game stuff with people.

My big secret is, BTW, that I can not only focus on one thing. That I’m chatting here about game stuff doesn’t say anything about what else I do.

Thats fair enough and I appreciate that distraction is of value. No such distraction for those fleeing the border to avoid conscription or those european nations that will take them under their wing. As usual, most folks who complain about this game currently play so much they havent got time to watch the news and probably arent european. Ignorance isnt always bliss

I play this game, chat in global occasionally. Check forums now and then. I also watch the news every night and read about what’s going on in the world.
Here you are once again making condescending and mean spirited comments about people you know nothing about. There is something wrong with that.
Why do you continue to play a game when you hate everything about it.? Why do you find it necessary to post unfounded comments on those that do? If people that play GoW and post in forums are ignorant i guess that makes you one of them.