Happened when I tried to retreat from a stage 8 battle. Android, PR was Tiny Dancer.

This can be provoked in any stage, any pet. Here stage 1, Shortlong rescue. 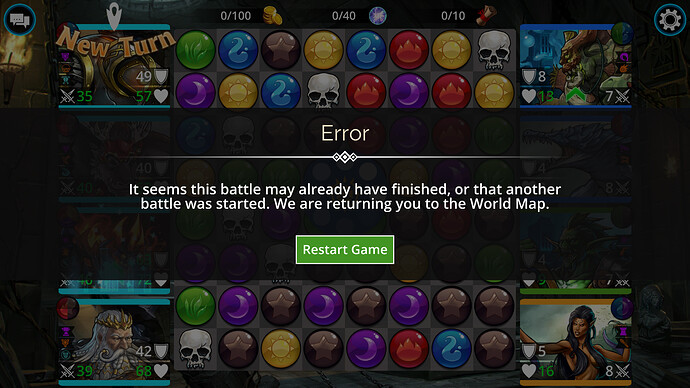 pet1920×1080 634 KB
It doesn’t just put me back on the worldmap, but reloads the whole game for me. Depending how much time is left for the rescue, losing 1-2 minutes that way is rough. The whole reload-when-time-runs-out was already bad enough, but this is ridiculous.
3 Likes
TimeKnight September 7, 2018, 1:49am #107

Just test the same thing on explore, and found the same problem.

The spell is working fine, adding 25 gold (20 from spell and 5 more from Merchant trait) in every spell casts, but nothing happened when it died. Looks like gold gain triggered on death might not work properly.

@HootyMcOwlFace Check out this article for more info

@Dust_Angel I noticed this text issue too and forgot to bring it up before we launched! It’s been passed onto the team

@Chalky123 Added to our team’s database to fix.

“Server time out” means you need to update your game on all devices
https://gemsofwar.zendesk.com/hc/en-us/articles/360000426596

@Live Yes, they all need to contact support. Unfortunately this issue needs to be fixed manually - if so, you may lose some Delve progress - if not, the issue will fix in two weeks time with the new Faction

I tried because I am desperate at this point - wanted to do explore for Gnome event and the loading time is so bad I need a longer time to load the battle than to play it. Not just does it always need to fill the loading bar twice, but it also stops in the middle, which seems like lag because the spinning gems around the card on the right also stop.
But yeah, reinstall didn’t fix a single thing. It’s fine for battles like delve, which take a long time, but explore is basically… well, not unplayable, but too frustrating for me to do at this point.

You can use any color for the Hero weapon, restrictions do not apply.

Happening right now in my Guild. 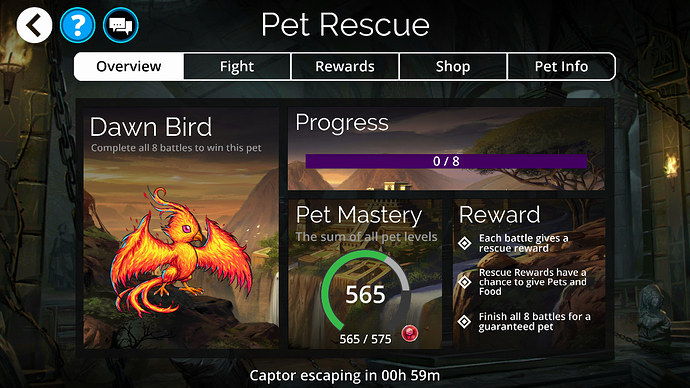 This was a thing even in 3.5 version. Is it intended to happening now, and the data in Sirrian’s post is wrong?

The Dawn Bird will also start appearing as a potential Pet Rescue from Pet Gnomes in 3-4 weeks’ time.

Also, sorry about posting report to wrong thread yesterday. I was not careful enough. I’ll link it here so the Dev can see it!

Borealis has Ice Armor now but the dungeon boss King Borealis does not. Probably an oversight, change it?

Behemoth has a stronger 3rd trait from 8 to 10 but the king variant is still at 12. If Borealis is getting the upgrade then so should Behemoth.

Omen traits still behaving super weirdly, I don’t know how well-known this is but… 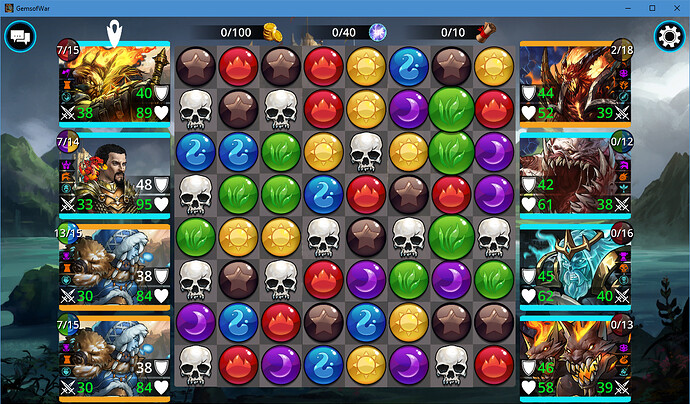 Omen of Nature and Fire on the other side. Hyndla #1 has gained six mana and Wrath has gained two mana. What the hell. I mean, I didn’t even see the gems actually explode.

This happens when the AI has omen trait. Initial explosion correctly give mana to the AI, however any cascades after that credit the player

@Shimrra Thanks, this is a known issue and it’s got an article already

I deleted my comment cause the devs came through and fixed the issue with extreme quickness. You should be good now as well.

This was fixed a few hours ago with a push, you’ll need to restart the game @awryan missed your post

I deleted it before Salty could.

We’re also looking into the issue where the new Crypt Keeper Pet earned from Renown isn’t showing up in Unowned Pets in the Troop menu > Pets tab yet.

The Weapon is now in the game correctly, please exit and re-open the game to receive the fix.

Maybe this is already know, but: The “Ghost Troop bug” still exists and if a Valraven (and maybe the gnomes too) is affected it won’t give us the sigils. Just lost two sigils in the current Delve Event due this, but well, i can live without it…

And it would be even easier to live with it if Wild Plains would be reworked. Just saying…