Every day since 5.3 from the arena I get an offer related to a treasure.
90% of the time of it’s a genies lamp. (The other two are usually crap as well. But let’s stay focused here.)

@Saltypatra I’ve wished to stop getting these offers at least 3 times. 3 wishes is supposed to be my cap.
I get that “RNG streaks”… But this is straight up spam.

Trust me when I say…I don’t need treasure offers.

These offers simply can’t be weighted the same for every player. Call it a conspiracy theory if you want. But lately… My theories are more fact than fiction. So my guess is, if you reach a certain “power curve” in Gems of war"… 99% of the time… You’re gonna see the crap that I do to hold you back.
And 95% of you that read this won’t care because you aren’t at that power curve yet. But when you are… You might just care then.

if you reach a certain “power curve”

Curious, at what point do you think this happens?

Not after getting the same exact offer twice in one day.

Because this literally just happened.

Curious, at what point do you think this happens? 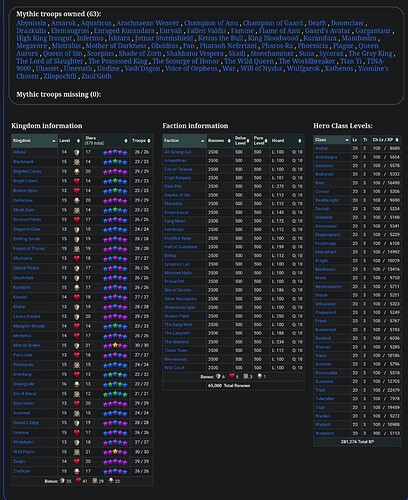 Might as well throw in yesterday’s SS and start spamming this thread with them like I’m getting spammed with them.
(I didn’t SS the multiple ones prior.)

They keep giving me the gem key, souls, gold deal…

Just streakiness… Not manipulated at all…

Are imperial deeds the only things you really need at this point? That and war coins, I guess. Really don’t think it would be game breaking to only show you those two offers. It’d be like guild chests with the guardians. After those are mythic, they are out of the pool and you only get the “good” stuff.

Although, maybe you’re getting treasure because you haven’t maxed your renown. (Looks at screenshot more closely) Never mind…

Since the update all I get is treasure and jewel deals in arena as well. I also have all factions complete.

It’s not rare I get the same offer twice on a day on Arena when I do my 3 arena runs.
Usually crafting jewels.

On the Xbox, I constantly see the deals for “crafting items” where you get the soul forge gemstones and gold/souls.

I keep hoping that the war coins show up there at some point as it’s complete BS that an achievement was made for them but then you don’t give anyway to earn them unless your a “new” player. War coins and the shrines are just another poorly made cash grab that is once again adding something to the game that no one wanted.

The game now has to much going on with it in general now. It’s time to just stop and create a Gems of War 2 or something.

Since the Arena, ummmm “revamp”, I have pretty much stopped playing it. Call it a personal boycott. But I do it for the campaign task, when it comes up and it’s almost always a treasure offer for me, also. I played more of it immediately after the patch (you can’t really claim to hate something if you don’t try it) and was seeing an occasional pet offer. All I have EVER been offered is treasures I have a ton of, thimbles of jewels and a few pets. Since I do not consider a chance to spend gems to be a reward in the first place, I would not play the new arena even it the offers were better.

Should generate about the same info that you see in my SS.

Oooh, interesting! Thanks for sharing. I’m only 9 kingdom stars behind

Lots of kingdom levels though

I don’t have the same access to epic tasks.

Hmm, I guess it’s possible devs decided you’ve gotten too far and they’re intentionally slowing you down. But, honestly, I can’t imagine that is the case - it seems like it would be a bunch of work to do and not really worth it.

My guess would be you’ve just graduated out of the other useful offers (troops, pets, class xp). And the way deed/writ offers are coded in, their drop rates don’t increase after that happens, so you’re seeing few and far in between, much like the rest of us.

It’s interesting though. I had a long deed drought for a while, no deed offers anywhere. But in the last three weeks or so, it’s been 1-2 per week. Which has hurt my gem collection, I had to pass on the regular deeds. Maybe the key is how many gems you have? If you had under 500, they might offer you an imperial deed to get you to buy some

Are imperial deeds the only things you really need at this point? That and war coins, I guess. Really don’t think it would be game breaking to only show you those two offers.

I have to disagree, really – if half of the offers someone received were for Imperial Deeds, they’d be able to progress their Kingdoms disproportionately further and faster than anyone else.

There was already a thread requesting that IDs not be subject to RNG distribution amongst players to avoid that very situation (although not even to quite the same extent), which I think is reasonable.

By offering Imperial deeds and writs in random offers that are unique to individual players, now you can obtain a more powerful account than anyone else in the game through RNG. this is a massive disappointment and IMO a huge blow to the reputation of the game. please reconsider. offering random power to a few players this way is equivalent to giving a new mythic that gets a 10/20 star kingdom, or enabling a new delve for a few players at random but no one else. if you are offering writs/Imper…

Maybe the best solution here would be the addition of a small and reasonably priced (unlike the current one) Writ offer available daily that wouldn’t allow someone to jump ahead by leaps and bounds (e.g. like they would if they got an ID offer every 1-2 days, or multiple), but enough so that Daily Offers aren’t completely irrelevant or a complete waste of time for them when they log in each day – kind of like doing Daily Dungeons, but with Writs and Daily Offers.

E.g. 50 Writs for 25 Gems (which translates to 500 Gems/Imperial Deed over 10 days), or 40 Writs, or another number. Obviously this would devalue their current Writ and regular Deed offers, but it’s (a) smaller in scale/effect, i.e. 0.5 Deeds vs 2 Deeds per day or slot, and (b) not my problem

@awryan where can i find this site please ? thx

Should generate about the same info that you see in my SS.

When daily offers were initially introduced, for me they used to include a pet offer 5 days out of 7, which I gladly bought in. Now, I still need a crap ton of pets to level up my kingdoms (i.e. almost every kingdom is requiring 1 or 2 lvl 20 pets), but I rarely get a pet offer (1 out of 10 days maybe?).

So, I can confirm useful offers were certainly nerfed at some point, in favor of useless keys / treasures / orb caches / etc.