The purpose of this topic is to cover the best strategies for Faction Delve teams. It is not to complain about how difficult Faction Delves are. There are other topics for that, so I will flag as off-topic any complaints.

Faction Team Basics: First off, you want to make sure Puddling is your equipped pet. One look at that little guy’s smile should give you enough encouagement to overcome any challenge. Well, that, and a sizeable treasure hoard. But how large should your hoard be?

For faction delves done without potions, my hoards for Primal Rift, Silver Necropolis, Amanithrax, and ASE were 167, 155, 134 and 353, respectively. Some players did them cheaper, some did not. It’s all about finding the right fit for your strategy.

Edit: Sorry to edit this post after some people have liked it. Hopefully I don’t do anything to cause them to regret it. I suppose they could just unlike it tho. I plan to include one link to the other thread, the first time I learned of it was thru this Link: Delves: Strategies, tactics and tips - #1201 by TheIdleOne

Instead of reposting links again, which I sometimes mess up and stuff, I will post the individual player’s name and their post number, which out of 1440 plus will take sometime to locate. If I fail to notice a post with applicable faction team strategy, I apologize.

More is on the way…taking longer than I thought…that other Thread is so cluttered tho. Please be patient. And remember to equip yer Puddling.

I guess y’all can call me Colonel Jessup, cuz don’t I feel like an A-hole. I don’t know how I missed this post from @Texugo-928:

I bet that took a long time to research and compose. Many thanks, and respect.

Thanks for reading, and happy delving. Time to bash some Elves.

Please disregard the first Paragraph of the OP. I will not flag off-topic posts. I’ve only flagged one post in the history of ever, and if I remember correctly, @discobot deserved it.

Hi! To find out what I can do, say @discobot display help.

@EliteMasterEric added a great guide for Primal Rift in the main thread, post 1478. It also includes a Crypt Keeper link at the end to his other guide, post 1447. Definitely worth reading.

Thanks for the hard work. Will post my The Warrens video here for level 500 no potions. Really as everyone said it is luck on status effects and I got entangle and then silence so that worked out!

Thanks again for pulling this together.

Drowned Grotto is a nuisance. I’m not too fond of Murky Deep either. I have had some paths with neither of those, but often hit one if not both.

A mainly Water Elemental team also works, but typically needs more potions to increase the damage to make it work.

I think Sunken Fleet can be done without potions with 300 True Hoard. I’ve reached boss room without losing any troop, but the board didnt help me in the end =/

The main path only have 5 different rooms:

If your true hoard is 300, you can survive 5 skull damage in Tier V battles.

The worst ones are a combination of these rooms: Coral Cave, Murky Deep and Drowned Grotto

There are 2 videos (with potions) in my playlist, you can see it if you want to.

I might look to start compiling those tips above into little guides, like: CRYPT KEEPERS SUPER GUIDE Run the following team. Lady Morana Lady Morana Lady Morana Grave Seer Your goal with this team is to utilize Lady Morana’s ability to deal lethal damage to enemies. This has a (10% + 2% x Purple Gem Count) chance to occur, so this kingdom is heavily luck-based, but if you can get a lucky roll it’ll be a breeze. Utilize your Grave Seer to fill the board with Purple gems (for the boost ratio…

The first faction guide was popular so definitely going to make more! Full disclosure, I’ve reached 500 in several factions but none with the pure team yet. I’m mostly compiling tips from other users here and adding advice regarding medals. Let me know which one you’d like to see me do next. PRIMAL RIFT SUPER GUIDE Run the following team (Recommended by Spectrum). Summer Banner (+2 Green/+1 Purple/-1 Blue) Redthorn Dark Dryad Alderfather Alderfather This is probably the most capable factio…

Thanks, I’ll start taking shots at it. I’ve finished all of the delves that have been completed no-potions with a sub-200 delve, so this will give me something to shoot for besides amassing gold.

To my knowledge, Werewoods pure faction has yet to be done at 500 without potions. The Idle One had a strategy for 200, and completed 300 with the same team. (Post directly after the one underneath), and describes his logic in greater detail in post 1429. (I’ve noticed there is a difference in the Post numbers in the website bar, and those on the side bar, perhaps due to post deletions, or something. It’s off by 18, depending on how far up the posts are.)

Well… I beat 100 and 200 without potions first try, but I have 199 Hoard, 50% faction bonus, all troops medaled, Snowball and Owlbunny maxed. Not really relatable to most…

On 100, I tried Werebear in the first slot. Wasn’t very happy with it as even with Enrage, it eventually transformed and kinda got stuck as Torbern for awhile. At some point top slot transformed again (I think back into Werebear), but then died to Death Mark anyways. Werebird was in second slot and helped lead to the idea of the 200 team…

Having all 4 troops gives a huge amount of stat bonus, but its not like the game is going to let you keep it lol.

Its a bit insane.

My 3x Medaled Werebird has 67 Attack before Delve bonuses (or potions). Hunter’s Mark lets it do 2x skull damage on hit.

So yeah, if you’re a sucker like me who gets skyfall skulls up the wazoo, it’ll do its job.

Only problem is that it has no skull protection, so potions will at least give you 25% skull reduction.

The only interesting observation I can give:

Werecat does 3x damage when there’s 13 or more Red Gems (duh). If you’re in a lucky universe where a Torbern cast can set you up with 13+ Red Gems without getting you killed AND Werecat is full, you can pretty much do some big damage AND loop until it transforms itself. Good for situational emergencies, I guess.

The least needed troop is probably Torbern, but its also nice to have at least one available. Werebear has the least amount of synergy with the team, but sometimes its nice to be able to reset a board. (think skulltrapped)

I’m not overly in love with the banner, but outside of +2 Red, I really don’t know what I want. I’ve considered Meteor Banner too due to how often I need to deal with Torbern, but then I have to test if -Purple is worth it.

Edit: I’m also contemplating if its possible to bruteforce the delve with 3x Werebirds + 1 Torbern.

I will look through for any additional more information and strategies, but for point of reference/comparison, I did just today complete it at 300 with no troops with medals, Hoard at 133, and Urskaya at 15. No faction pet bonus, which would change if I make it to 500, and I’ll edit tomorrow when I can check my other pets.

Edit: I found my pets are both 29 away from becoming Mythic. Plus a bunch of food. Here are my stats for them: 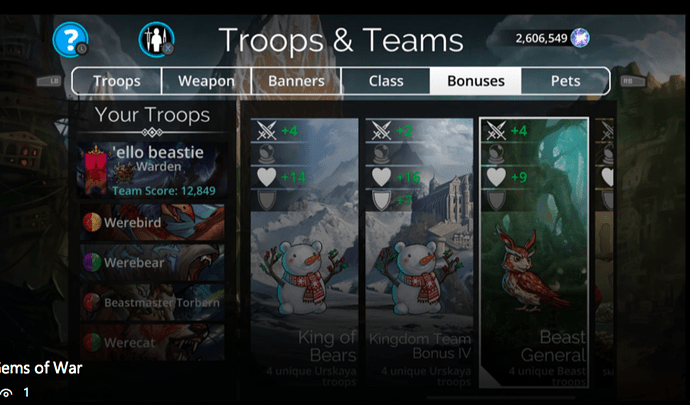 I also had Guild Bonus of +4 Life and +4 Armor. Someday we’ll finish all basic tasks again.

I went topside because Legendary room was Dark Cabal, and Sacrificial Priest, and he did sacrifice Dokkalfar for me. I did lose a troop in the second room a month ago at Horde 100, and it took me this long to save the gold to get Horde to 133 (+18 Magic).

The final battle I entered with the Bird, the Bear and a Torbern. Strategy kind of goes out the window when the troops change form several times per battle, but whatever. I got lucky that the enemy never shape shifted, and then with the last troop ready to cast, I set up the board so his cast would give me a four match.

Cedric Medal and two Yasmines, because those are the only ones I have.

I should’ve taken a screenshot so I could remember what the other 2 rooms were. My Bird killed the Bear with a Torbern cast, and wounded the enemy Bird, but then died the next turn. The Bear killed the next two, and it’s explosion set up a favorable outcome for me.

In Conclusion: It will be some time before I am ready to tackle this delve with a Faction team at 500. By then, perhaps my two pets will be Mythic, the Hoard will be 300 plus, and I will have a favorable path to navigate.

If the top path has Tangled Path, that is an obvious avoid. But if it has Sacrificial Priest in the Epic Room and one of the Ultra Rare (Corrupted Altar), that would be lucky indeed. If the Bottom Path has Dark King’s Hoard, it might be worth doing. 10% Deathmark could work out about as well as anything. Although surviving that room with 4 troops is not guaranteed. Probably best avoid that. But I’ll avoid rooms that have 50% skull reduction as well, such as Bulette Lair.

Upon further reflection, maybe I’ll just avoid the whole endeavor. Good luck to those who try.

I said in another thread that i “half-assed” this Stategy guide. Expected levels for Delves - #16 by ChunkyMono
In some respects that may be true. For example, this:

(I’ve noticed there is a difference in the Post numbers in the website bar, and those on the side bar, perhaps due to post deletions, or something. It’s off by 18, depending on how far up the posts are.)

I could take the time to review all references to posts I made previously, to ensure future readers get to the correct posts in corresponding threads. But I just don’t care enough to do so. Still, I normally try not to swear. So, moving forward, instead of saying “half-assed”, I will just say I “505’d” it.

It’ll be here, whenever you feel like giving it another go (or so I tell myself on all my half-finished projects!).

If your Tink Steamwhistle can survive 405 damage (135 * 3) in one cast, you should be able to do it without potions eventually…

I’m still on Lvl 20. GW and Factions not a good mix right now.

Adding a few others while I’m at it…

Only other one I haven’t done is Stonesong Eyrie, but I hate that too much to list here.

Link to a nice spreadsheet by @TimeKnight: Delves: Strategies, tactics and tips - #1890 by TimeKnight

Edit: I have a lot of real life stuff on my mind these days, but not a lot of stuff in my mind. Not an excuse, just, apologizing in advance if I offend anyone. It’s easier for me to have all these items located in one of my posts, than to remember where they all were in a mega thread. Thanks for sharing your ideas, and allowing me to share as well.

Final Edit: I found my rambling post for Illithia…hard to believe that was only 26 days ago. Others explained the delve better. I wouldn’t have been able to do it if they hadn’t. But I added a few things I learned as well. I should edit that post as well, but it’s time to eat. gl hf Delves: Strategies, tactics and tips - #1844 by ChunkyMono

There is currently an issue with the links in this thread not going to the desired locations. While there is an option to use an older forum format, I do not know if that work-around would fix this issue, as the older format irritates my eyes more than the broken format does.