Apart from visual bug on my second slot it’s just a question of time now. Hoard 111 with no bonuses.
Starting team of Glass Golem/Doppelganger/Copycat/The Mirror Queen with Anu/Seasons/Nysha medals.

Middle room with Gluttony (Sacrificial Priests killed slot 4, then slot 3, then himself and their Gluttony didn’t get a devour, but killed my Glass Golem nevertheless); copied it, used it to devour boss room Glass Golem and Mirror Queen. Used my Copycat to summon additional Gluttony’s but - how else? - they would die to skull cascades right thereafter.

Obvoiusly, this strategy is very fast and effective when it works (namely, Gluttony gets those devours and exploding 4 gems doesn’t backfire terribly; also boss room Doppelganger shouldn’t turn himself into Gluttony and start doing what you’re trying to achieve in reverse).

I know. But in this run, the top route gave entangle to all enemies (i chose to skip it)

@Texugo-928 Why do none of your videos include the boss rooms?

It’s really misleading, seeing how these are usually the hardest rooms in the delve.

My goal was just to leave all the delves in the last room. I realized during my runs that, in general, this goal is more difficult than simply finishing a faction.
there was no need to finish them as other colleagues had confirmed success with lower hoard. The idea is that those who watch these videos, notice the difficulty on the main route and project a successful expectation in the last room. As for delves that have not yet been completed. if you compare, for example, my video of the Sunken Fleet and the video that is in the description made by “ben murray” with potions, you see the similarity in the statistics. so you can have a sense of what the last battle would be like. Or my lirasza lair video with 205 true hoard + 35 (tier VII) was surpassed by a potionless strategy using only 200 of hoard, and even more, Dust proved that it is possible to beat the last battle without losing any troop. As I complete the factions for my friends, I will repost everything again. but as it will take more than 3 months to get them to the 500th floor, collect treasures and money; the only contribution I can make is this.
Factions already completed so far:
City of Thieves (with cedrics bug)
Silver Necropolis
The Deep Hive
Wild Court

I am progressing in Primal Rift.

Finally did Fang Moor. What a terrible, terrible faction.

I’m sure it’s worse than anywhere else really, as there are so many issues you don’t get elsewhere.

I’ve mentioned some of the issues with this faction and bleeds, you have to hope and pray when you click on the delve that you haven’t got anything with Dark Monolith in. That’s not withstanding anything with charm, true damage, multiple stoneskins and entangle, 1 shotters etc.
Covers most doesn’t it?

I only once in all my attempts got through the room with Wight in (level 2/3 room) 2-3 times fully intact. It’s a bully! Picks on a target and stays on it.

Shaman of Set is completely useless when there’s any red coloured AI troops. It’s so prone to leaving a bad board, think Courage or Honor and multiply it x5. I have constantly left AI turns even when making 32 red gems. It should work like a transformer/converter, and the logic would be that the more of a colour you transform, the more chance you will make 4 or 5 gem matches. Historically for me, it missed so often, it was a joke. I stopped using it about a week ago, as was so tired of it creating mana for AI. It’s only useful use was if you had a run without red troops in, i.e Forest Troll Rooms, maybe the Icy Coven room. It’s better for mana denial than reliable mana generation.

Asp is also a poor troop. Insufficient damage, looks like it would be good on paper, but it’s not. However, you cannot lock into a specific setup in Fang Moor. You have to review the rooms on your path and pick troops that will help vs some of the opponents. So Horned Asp is needed for Dwarven Gate, The Bat Swarm and a few others.

I think in this faction, if you were just doing the boss room, 3 or 4 Dargons would make the best team. Maybe 3 plus Setauri, who has Thick Hide, so a little skull resistance. The problem is the path along the way is fraught with troops that will pick apart a slow building team that cannot raise health along the way.

Anyway it was close, skull trap city really, I made a move with my first Dargon that cleared a mess of skulls and a few skull traps for just a 3 skull hit. I think that won me the battle as I had enough attack to kill the last two troops with Asp and skull hits. It was a borderline one at the end, could have gone either way and so many times it went the wrong way for me, somewhere.

Prior to this, it was basically 2-3 minutes of working out the least likely odds of leaving the skull match I always left.

I do not recommend even trying this without potions!

Thank you for taking the time to write such an in-depth answer, I really appreciate it!

I am not sure I agree with your argument though. Potion runs differ in several ways, mainly:

Given these, I don’t think that potion runs are truly comparable to non-potion runs in difficulty, or strategy.

Next One: The Warrens =) 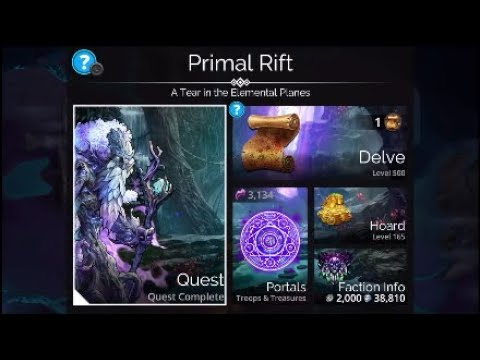 More for the observations:

What I tried and beat 200 no potions with:

Ironjaw
Deminaga
Tartarus
Tartarus
Banner of Sin (I’m tempted to use Banner of Madness, but with Deminaga making Purple, I might be better off just having faster purple regardless.) If only a +2 P/+1 Y that’s not -R or -G would be useful here.

Leave Ironjaw full unless Deminaga is full, then it might be safe to cast Ironjaw.

Today on my first attempt and got to 3rd room without any pains. Then RNG killed me. Trickster is going to end runs…but I figure one time, he’ll pan out. And that’s all I need.

It might just be the 199 hoard, it felt oddly easy.

Room 1: It was a weird tug of war with their 1st Ironjaw that took some time, but it was never really all that difficult.

Room 2: Got the Fenrir room. Not the most ideal one to face, but there could be worse. One of my Tartarus got casted on twice and the top troop took some hits, but was never in any real danger. At the end, Fenrir (alone), casted on itself, so I was able to get a meaty Tartarus cast on it. Left it at 2 hp. I had to play minor defense not to get hit by a skull skull, but it still wasn’t overly scary.

Room 3: The boss room wasn’t too bad. Their Tartarus does 140 damage + my attack, so it hit my Tartarus for 268. The damage would be less to smaller hoards though. At one point, their The Infernal Machine filled up, so I casted my Ironjaw to empty the field. TIM’s cast created a ton of Doomskulls that gave me 3 5 matches of Doomskulls. That was kind of funny.

I killed TIM, then I 3 casted their Tartarus right after.

At that point, it was just an easy war of attrition. At worst, I was always at 2 shot range for my top troop. Occasional use of Ironjaw is encouraged and isn’t much of a downside if you have Deminaga ready.

If you’re going in with a lower hoard/stats, I’d suggest 3 Gaard/Yasmine medals, just to have some HP cushion. Most of your damage output is Boost ratio from enemy attack for Tartarus anyways.

How reliable and helpful was your own Deminaga in the 500 attempt, Idle? I beat on the first try a no-potion 300 faction run (100 hoard, 50% bonus) without Deminaga; the team I used was:

I’m curious because I don’t think I could have won 300 without Infernal Machine’s backup summons and 500 is obviously going to be much tougher.

I think Deminaga is very helpful in this pure faction. It spits out purple gems to use and provides mana to purple troops even when it fails. The AI has it setup poorly so it can’t actually contribute much. Assuming Iron Jaw stays full, you have a 4 color team of red/green/yellow/purple to work with across 2 troops. The more mana and mana acceleration Tartarus has, the safer you’ll be as you can pick off problem troops quicker. I guess the best way to think of it is it helps with rushdowns. Coincidentally, if the AI takes extra purple from Deminaga, it usually just goes to their Lockjaw which slows it down if its not filling other troops.

TIM’s skulls got me in trouble often in 200, so I lost interest in running it, even if it is a summoner.

This will be one of the easier ones to do without potions. Almost too easy with potions. Zero problem at all. First time I’ve actually one-shotted the 500 attempt. If you do it without potions, hoard level barely seems relevant; due to nature of Tartarus. 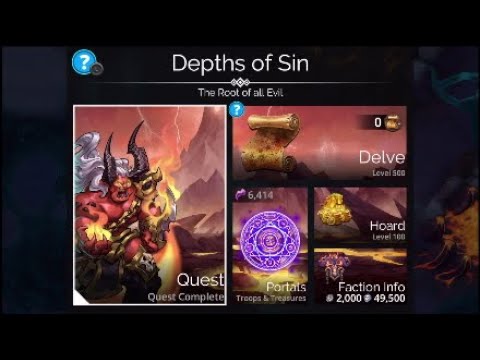 They are the only TRUE sense of progress in the game. Everything else is circular.

Dark Pits update. Now Hoardlevel at 200 and I have already Mist of Scales at level 15 for the 50 % skill bonus. I am barely able to manage the very first fight in one out of three tries. Then get crushed like an elephant sit on a mouse in the next battle.