We have made an update to the Dungeon to make it feel more like players are exploring a dungeon, and adding new ways for players to interact with it.

Please Note that this update will be available on Steam, iOS, Android, Xbox, and PlayStation. There is currently a delay on the release of hte update on Amazon,we will keep players updated while we learn more.

Switch will be receiving the update at a future date.

For our Italian and French speaking players, we’re very sorry that you may notice some missing text in the new areas of the game.

We are working on getting this fixed as soon as possible.

So biggest question…is there a chance to get a duplicate from dragon egg…or is it always a random dragon troop from unowned dragons ?

You already did your Dungeon battles today?

As someone who enjoys collecting Dragon troops I am absolutely looking forward to this update. Just one thing – maybe try not to release the Switch update on a Faction Assault Tuesday this time? Sure, the “out of sync” message only cost me one Delve, but an event sigil’s an event sigil.

I see it’ll include the fix for the Ironhawk Submerged softlock, hopefully this applies to other forms (e.g. Lycanthropy/Burn/Curse gems) of the bug too.

Platform, device version and operating system: any Screenshot or image: not required What you were expecting to happen, and what actually happened: When you match a burning gem, quickly click your troop with a single target abillity. Game allows you to click ‘cast’ once the board stand still, meanwhile burning gem visual effect is still on fly. Once spell is clicked, targeting phase begins. And now when burning effect hits its target, that target becomes unavailable, even if fire doesn’t affe…

So why can I open the doors? After daily reset, the doors will be closed again?

gotta see how its gonna be, can’t play it today. but if RNG can make you get even worse rewards due to traps or not finding treasure room or high level battles in the overall run. this is just bad.

We have fixed an issue in the Weapons Filter where Weapons could be sorted by ‘Amount’ despite only being able to own 1 of each Weapon.

Has been replaced by “Temepering” which works as intended, but… 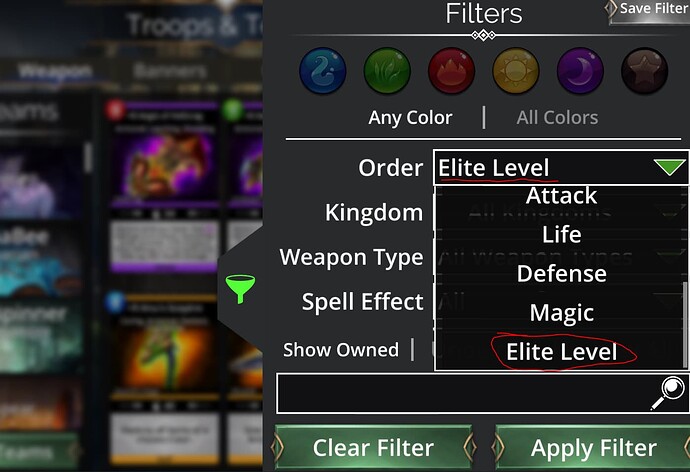 Now we have Elite Level
It displays the weapons in alphabetical order.

Neat concept/update, though that’s me done participating in Bounty ever again

if its anything like the Hoard Mimic, they want players to play indefinitely.

Really appreciate the cursed runes! If it shows up again tomorrow I’ll finally have SoulForge done

So how much Dragonite do we get for a perfect run? Curious how long it will take to get the new weapons and troops. My guess would be several months or longer probably.

91 [TUTORIAL_DESCRIPTION_3355]
When matched, Giant Gems will give you an extra 5 mana and explode.

I don’t see any new recipes in the forge.

Nvm, I found them in the weapons tab