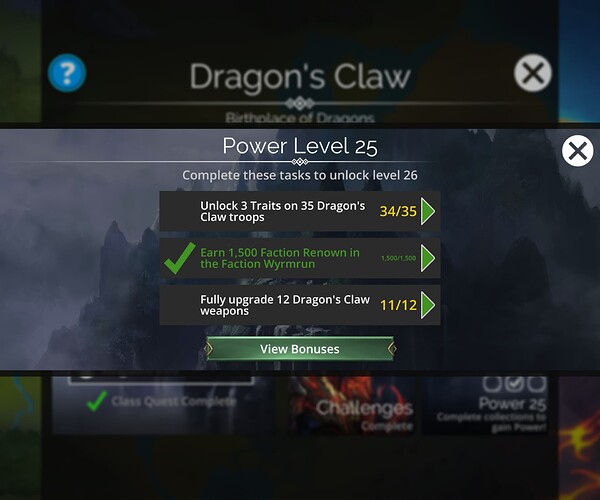 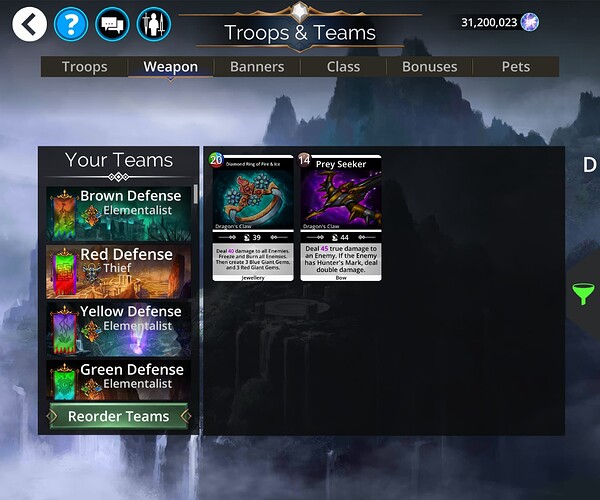 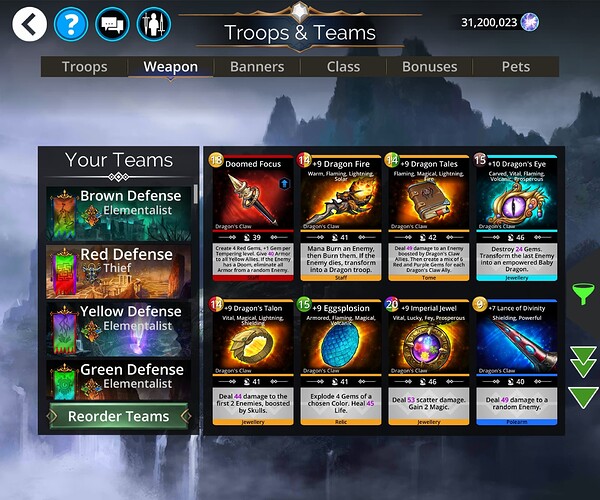 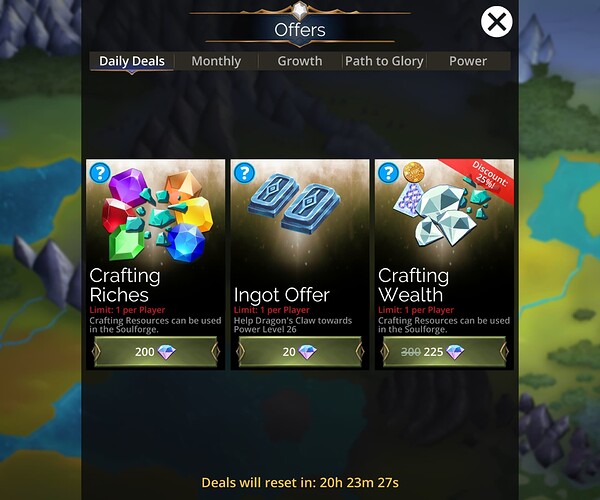 What you were expecting to happen, and what actually happened:
The only owned weapon i have that is not upgraded is a Doom weapon. Ultra rare ingots aren’t actually helpful. Instead it’s offered as a penalty for not wasting doom scrolls. Or paying money for a useless weapon. Or not owning a currently unobtainable weapon.

How often does this happen? When did it begin happening?
Happening for too long. Was allegedly fixed with patch 6.5

Steps to make it happen again
Have programmers write basic blanket codes that results in kingdom offers being an illusion in terms of actual helpfulness.

Originally published at: https://gemsofwar.com/6-5-update-dragons-path/ [image] We have made an update to the Dungeon to make it feel more like players are exploring a dungeon, and adding new ways for players to interact with it. The Dungeon Menu has had an update to have 2 tabs in the Menu. One for the main dungeon, and one for the new Dungeon Shop (see below). Dungeons now have a Level that affects the difficulty of the Dungeon. The Dungeon Level can never go below 1 and can never be h…

Werent these useless ingot offers supposed to be over now? Or is it too early still? 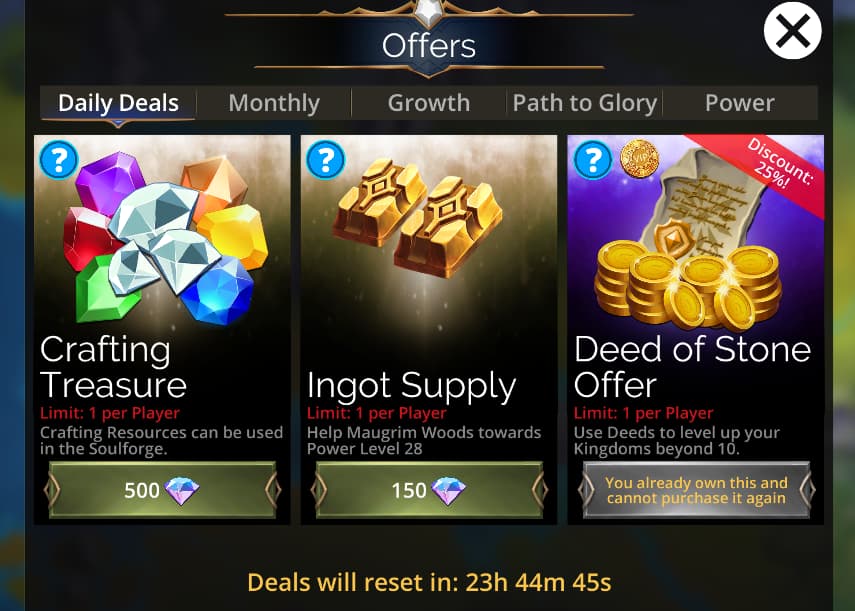 Please sir, I need you to stop trying to help me. 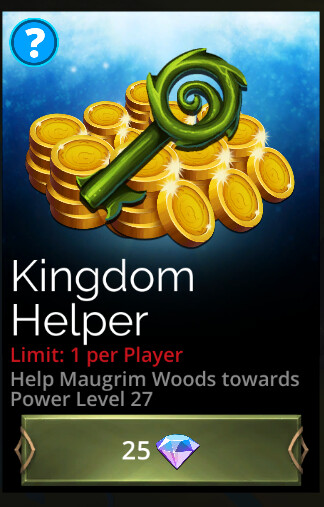 @Jeto any sort of actual ETA for the fix?

Technically, they never said these bad offers would go away, just that they made some things better. No details were provided about what that is, other then the list of new offers. I don’t suppose anyone has seen any of the new offers?

Regarding the offers, there are still changes coming and more in the future.

As for this week specifically, there are some Elite levelling offers that need to be tested before we release! If everything goes the best it can with testing, we plan to release them within the coming days.

Unfortunately, an issue was found when testing the forge scroll offers for doomed weapons, which has caused this to be delayed.

Currently, there are no plans to remove existing offers, but as we are investigating the programming and intelligence behind these offers going forward this could mean offers that are unnecessary will no longer be offered or stop after a certain Kingdom Power level.

Update: Unfortunately the Elite levelling offers have been pushed to next week now, as they, unfortunately, have not passed testing so far

Currently, there are no plans to remove existing offers, but as we are investigating the programming and intelligence behind these offers going forward this could mean offers that are unnecessary will no longer be offered or stop after a certain Kingdom Power level.

May I ask why it’s so difficult to code something like. “If unable to level up kingdom. Then DON’T offer weapon upgrades.”

Or use the data you’ve collected to see what offers people actually buy, keep those and scrap the rest. Surely you have the ability to do targeted deals based on what each user spends money/gems on.

Like @awryan said, I get ingot offers all the time, but I never buy them, not once. Cause I have literally thousands upon thousands of ingots. What I don’t have are all the weapons, I’m still missing 168 of them, can’t use ingots to upgrade what I don’t have so there is no point in ever buying this deal. So I have to wait for the beginning of each new week hoping that that the Soul Forge has one i’m missing and I have the extra diamonds to craft them instead of 1 of the mythics I am missing.

Its the same with the deals for Medals. I can grind those out and I see no point in medaling troops I don’t use as doing so doesn’t increase the Kingdom’s power level. At least not for any of the levels up to 20, haven’t gotten a kingdom past 19 yet, as I am stonewalled not having multiple level 20 pets, a mythic troop, or i’m missing weapons.

The pet deals are literally the only deal that I have spent gems on, everything else isn’t worth the cost or I can grind it out instead of spending the gems.

so, now we don’t get useless event key offers, instead we get useless ingot offers that won’t help.

seriously, thx for fixing maybe something, but definitely not everything. this is so dumb. I especially waited until today, because things should get their fix “over the past week”.
Seriously, can the dev team for once - just once - actually get something right? The incompetence sometimes seems to only get beaten by the translators. -.-

some claryfication about this would be nice now. how many more announces until things get a fix? how many more weeks of delay? is it really that hard to make this matter priority #1 for the devs?

or do the devs just not know how to fix it? @Jeto

if so, it would be a poverty testimony - and since a long time now it just looks exactly like that - but at least if it is like that, announce it and “the players” then have the info and “the players” will move on. Not pleasant, but “the players” can act accordingly to the “problem” then… 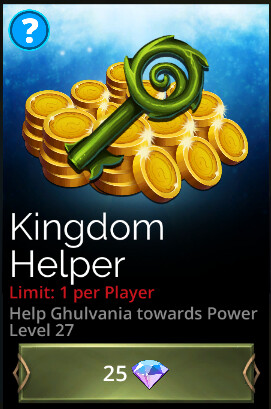 In principle, band-aid solution should be simple - no kingdom helper for power levels past 20.

They seem to have some sort of detection mechanism in place, since those offers say “Help kingdom X to power level Y”, so just add the restriction “if Y>20, then no kingdom helper” in there.

Implementing in in practice is a different issue though…might as well prove impossible to do, right?

Some of the required fixes here may not be entirely straight forward but its good to see that it appears to be high priority and is being tested prior to release. I still get troop offers that I have 100s of mythic copies of already but all pet offers are on point. This should therefore be an easy fix to implement because the pet coding is working and should be transferrable. As far as weapons (ingots) etc go then the code will have to examine the collection of all players individually before making a valid offer at daily reset. That could crash the servers big time.
EDIT.
Then again, to fix most of this will require a full inventory and level check of every player at reset in order to offer each player something valid. Kaboom!

But the presence / absence of pets for each player individually does not lead to the collapse of the servers. Apparently the problem is something else.