And so it begins...Stupid Kingdom Helper offers for everyone!

I’ve been ignoring this feature ever since the first time I got blocked on a task, and it resulted in bad offers. I’m not going to waste my time trying to optimize my usage of resources to prevent this from happening.

did the devs change sth? since two weeks the AI can give me a daily deal for eldritch minion, so far i haven’t got a single one

did the devs change sth? since two weeks the AI can give me a daily deal for eldritch minion, so far i haven’t got a single one

Are you sure you are blocked with the right task? If you are supposed to trait troops you won’t get any troop offer.

nah, i left eldritch minion at lvel 19 (though it is mythic), in the past that didn’t work,maybe i have to wait longer

The only offer a “trait troops task” has ever given to me is for a troop I’m missing. I frequently don’t trait troops until I’m actually advancing my kingdom power. I only noticed that they can generate any offer at all after bringing back a retired alt to test stuff who was therefore missing troops from the eligible troops list, as when you are these are generally the troops you get from event buy ins or glory packs and hard to not have if you are actively playing.

The only offer for troops that are already mythic I’ve gotten was from a “elite level troops” task (the one we all know has a bugged offer pool).

Level x troops to 20 task has never, ever given me offers for otherwise eligible troops I have already ascended mythic, and I have a lot of data to draw from on that front. Entire years long stretches where a single siegebreaker or godslayer was the only eligible troop from the entire kingdom or me being lazy and not ascending the set of glory troops from last month where a kingdom that did not generate offers at all, while having multiple troops that would otherwise have “eligible” if not simply ascended, suddenly spit out these offers as soon as they could.

As far as I know, none of these has changed since their inception.

It would be really weird if a single troop broke this interaction, but frankly, I’ve seen weirder in GoW, so who knows.

nah, i left eldritch minion at lvel 19 (though it is mythic), in the past that didn’t work,maybe i have to wait longer

You won’t get any offer once the troop is at mythic ascension. 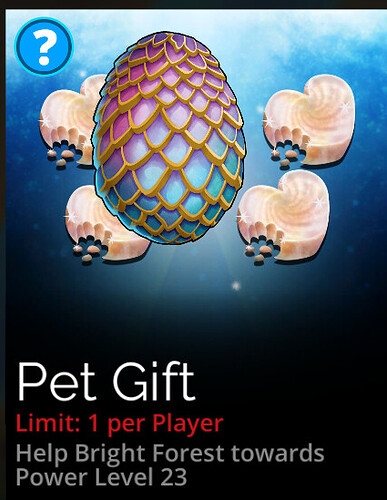 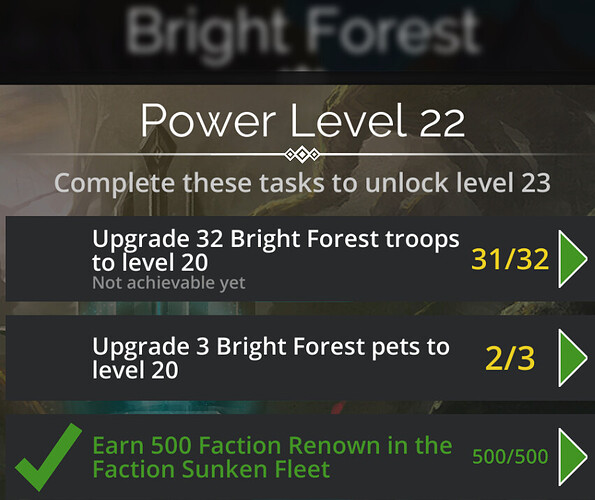 useless daily offers are one thing, but daily deals for kingdoms which can not be leveled further? this a new low

What exactly don’t you like?
Unfinished power task due to pets? - Check. Pet offers in daily deal? - Check. It’s working perfectly for once.

So what that you can’t gain a star at the moment? When one more troop gets released, you’ll gain star immediately because, hopefully, enough copies of the pet will be bought…or would you rather not get any pets now and only have offers start appearing in future unknown when that is the only unfinished power task?

I guess some people are never content even if you give them necessary stuff on a silver platter. (Or just trolling, which wouldn’t be much of a surprise.)

Tbh I call this a luxury problem you’re that high / far that you have to wait to a new BF troop comes in the game…
Im stuck on the point that I dont have mythic pet’s and yeah I dont like that my progress cant further on that but imo is GoW a game of very much patience, maybe even more luck and further just a great game with so many things to work on that when I have that all reached the mythic pets also will be reached

I kinda like that offer. Give it to me!

I haven’t bought the useless “kingdom helper” in months, it’s 9/10 a common troop upgrade, I have over 200k gold keys, I don’t think I need common troops, but here we are.

Do you think the game assumes since you haven’t put medals on your troops its because they are not max lvl? Therfore you need more troops to make your’s mythic to put medals on them.

No, I assume the game is beyond stupid.
It doesn’t take rocket science to check what the rarity of the troop is.
Offering a troop to “help” when that troop is already mythic is 100% pure idiocy & stupid.
If a medal would help with upgrading it, then offer a damn medal, not the troop that has dropped 1000+ times already from a gold/any key. 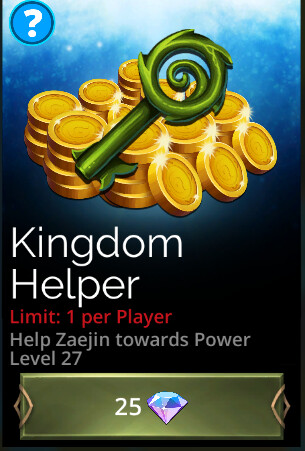 Ever stopped and thought about how stupid this actually is?
The offer is generic event key. It won’t help with this particular kingdom power at all, unless current week actually matches the kingdom in the offer.
There are… 36? kingdoms now. I … just don’t even.

Kafka said the devs are working on this now, and this is being discussed in more detail here:

Is there any chance to get the community involved in this in some way, at a point in time where the biggest blunders can still get averted? To give some examples: “We’ve improved the way daily offers work. In the past, an open task like upgrading a number of weapons triggered random ingot offers, possibly of a rarity you didn’t need. We’ve changed those to always offer bundles instead, in this case a number of ingots of each rarity. And we’ve even slashed the total cost a bit, you pay 10% le… 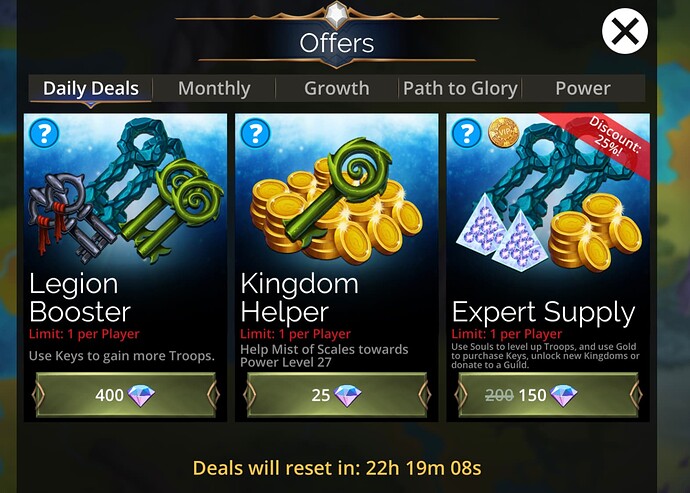 You had one job to do. And that was not introduce medals and forge scrolls with the 6.5 update. 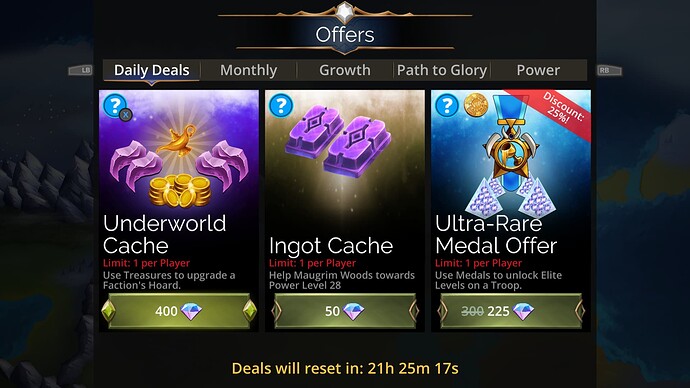 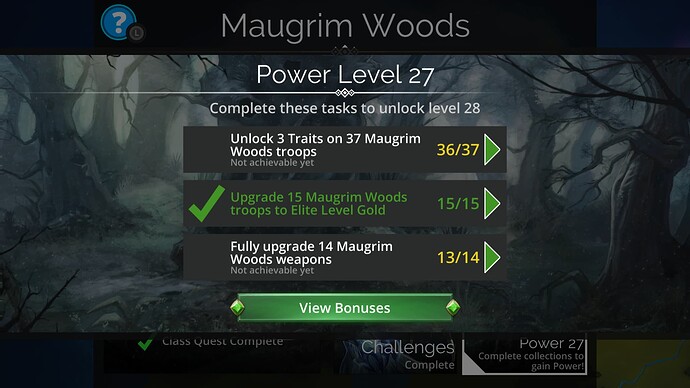 At least (!) rewrite the code to check IF the task is possible to be fulfilled. Ingots don’t help if there are no weapons to be upgraded. 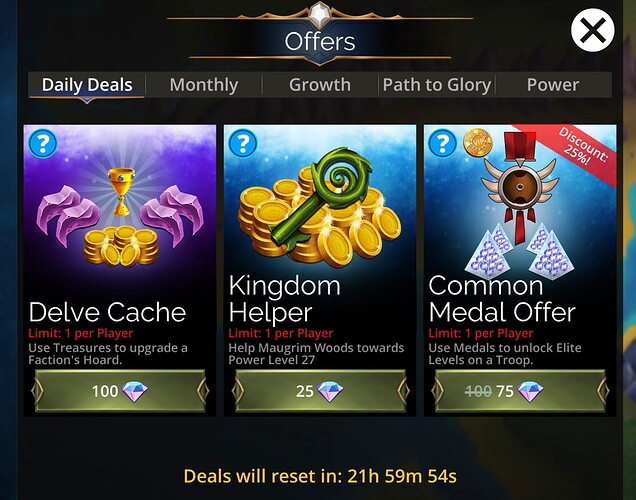 The improved offers might no have been activated yet, see last line.