This is where I’m at with my Hero Level 37 account:

How is/was all this even remotely possible?

Six words, including these: Treasure Hunt.

Consistently multi-vaulting in the Treasure Hunt mini game will net a player the best chances at accumulating the required resources to bolster an account early on in the game.

Doesn’t hurt to possess a modicum of determination, either.

Call this a “low-level, solo run” of sorts.

A history of my Mythic drops:

In the long run, RNG is on your side.

Quick shout-outs to @Lyya and @Taransworld for their awesome resources available to the entire player base.

(And, an RIP for the portions of taransworld’s site that are no longer supported and were invaluable tools.

(Taransworld seems to be back… hopefully for good.

Also, the developers, for generosity with their time and a willingness to address issues and the like. Many thanks.

And, the forum members. Thank you all for providing different opinions and perspectives and a genuinely unique experience.

Just a quick note to those who may consider embarking on such a journey:

You will find that it will no longer be possible to maintain such a low level if power leveling kingdoms is prioritized, as some of the requirements will make it necessary for you to gain experience. I was able to earn double skill bonuses, as prior to the 3.5 update, gold plus acquiring, ascending and traiting troops were the only requirement for power leveling kingdoms. (It is why Sin of Maraj only provides a +1 ATK bonus for this account, as it was released after [or with, can’t remember] the 3.5 update.)

Additionally, this is not for the completionist, as certain game modes and corresponding content and troops will be locked off with restrictions such as “no guild” and “no soulforge.”

So, why even play this way?

My approach to Gems of War is/was that of any RPG I typically engage in… that is to say that I find a method of building/strengthening early on in order to facilitate progression, and in this instance, Treasure Hunt proves/proved suitable.

Also, this account is/was merely an example of how healthy one player could build an entirely F2P account by their lonesome.

And, on the topic of health, Treasure Hunt engages the retinas, thus inhibiting the progression of my retinopathy. (Severe retinal scarring/tearing has left me with a vision impairment that meets federal guidelines for legal blindness.)

An update on my ocular health: after numerous procedures/surgeries, a decent portion of my vision has been restored.

Or, maybe, the devs will finally update Treasure Hunt… into oblivion.

Regardless, here is the current progress for a Hero Level 37 account.

Oh, and the tenth post in this thread shares details of another low-level, f2p, solo account, where a Hero Level 12 has FOURTEEN base rarity Mythic troops thus far.

For posterity, a treasure-hunting, lone

17 Likes
Treasure Map idea (again)
Enough with the Treasure Maps!
Show me the mythics. Who has the most cards mythic? (Rankings)
Gems of War - A Game for Mid-Level Players
Are the Devs taking things too far?
Contemplating leaving gems of war
Please update Treasure Hunt...we have asked for years!
What to do with a ton of Treasure Maps
Do you like the Arena Revamp?
A New Mythic Approaches - Will of Nysha
Treasure Maps: a plee for their importance
Melissa96 May 27, 2018, 8:44am 2

What an incredible achievement it would be.

How long did you have to waste to accumulate all that? Why not join a guild and make it a 1000 times easier to progress…

Not something I would ever consider doing due to not wanting to shut myself out of 95% of game’s content and own a piece of land on the Moon (I think having a bunch of cards collecting dust on a shelf is basically that), but kudos and congratulations to your for your persistence (is this the right term to use?)!

On the technical side:

IIRC, I unlocked the “Finish the Tutorial” achievement in January of last year (2017).

As for joining a Guild to facilitate progress… I specifically approached the game intent on doing things by myself, as sort of a challenge, if you will. Also, I did not want to be beholden to a Guild.

I wouldn’t consider it a waste of my time. It was/is an engaging activity for me. I just like matching stuff, and if I get rewarded for it, and can then use those rewards towards collecting really cool troops to look at with what’s left of my vision, then I’m down.

On the technical side:

The “six words” was an attempt (and fail) at humor. “Six words, including these: Treasure Hunt.” That would be six total words.

As far as obtaining maps, for a while, I would farm them in Broken Spire, Stone Wall Challenge, iirc.

My team was comprised of Templar, Tyri, Paladin and Lance Knight, as those were the troops I had early on, and they seemed to have decent synergy. Plus, way early on, when I didn’t have the souls to level them, they (the Knights) had a few bonuses that helped.

The strategy was to take out Luther with my targeting damage source (Paladin) before he cast his Attack buff, Stone Giant and Archon Statue were then eliminated, leaving Fortress Gate. I would allow FG to take brown mana and cast, while I used Templar to tank and “green” the board, while buffing up everyone’s armor, and Tyri, when ready, would cast to gain all her mana back (targeting green or purple mana) and have a chance at a map.

I would do this until for each battle until I maxed out the map cap, which was twenty at the time (yes, that long ago). There was no 4x Animation Speed, either, so you can imagine how long matches could/would take if RNG decided to troll me.

Now, I just redeem my Glory that I earn through Treasure Hunt and tributes for maps at the Glory Shop.

My account is kind of a “machine” in that way. I haven’t leveled up since last summer some time, and that was the last time I farmed maps.

Oh, I had totally forgotten it was possible to buy maps for glory.
So, yeah, after getting some initial funds you really can carry on without exploring.

Adhering to the expressed conditions in the OP, I created a new account (while the 4.3 update was live) to see how healthy I could build it early on.

Got through the Sheggra battle to reach Hero Level 12, and was fortunate enough to acquire a treasure map via a seven times cascade.

Triple-vaulted that particular map, earning gems and glory in the process. I reinvested that glory into more maps, and from there, the cycle/process began.

Basically, at level 12, without guild assistance, entirely free to play, I was able to accomplish the following with the resources earned via Treasure Hunt:

Probably could mention this, I suppose.

And, probably these, as well: 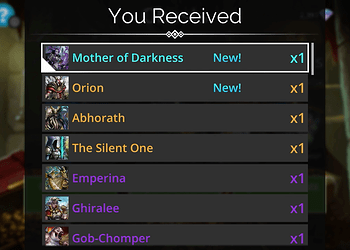 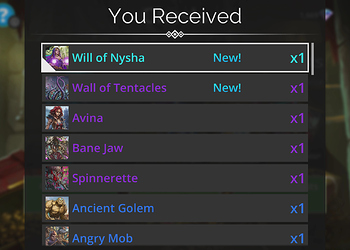 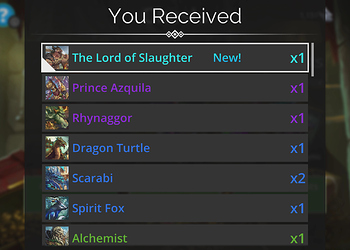 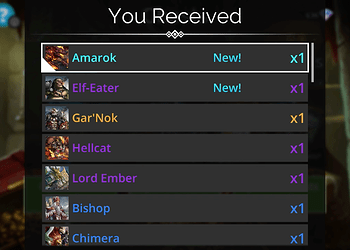 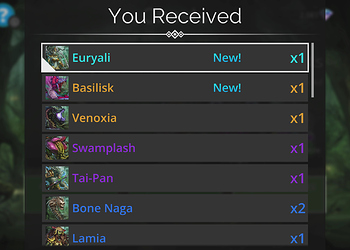 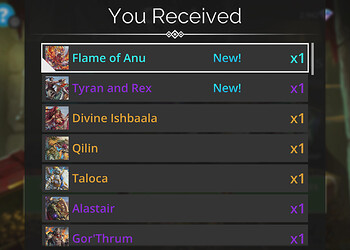 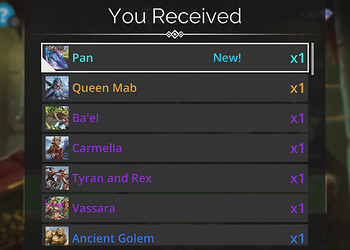 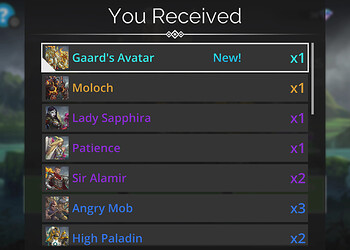 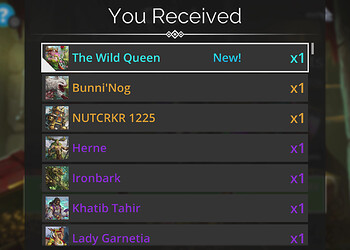 and RNG trolled me with a second one for good measure: 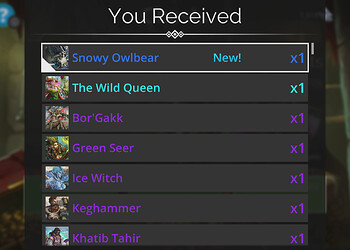 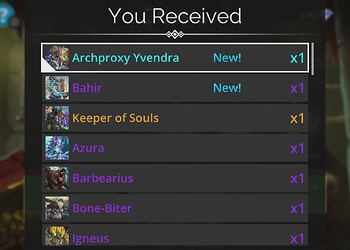 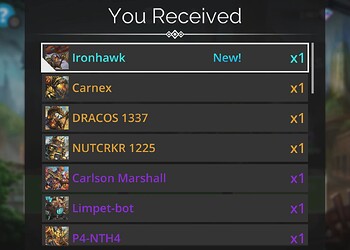 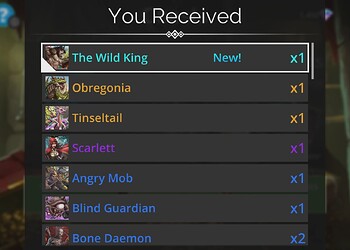 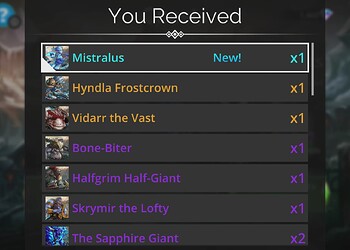 And, if I include the handful of Orbs of Wisdom (via Orbs of Chaos received from consecutive logins at month’s end) with the arcane traitstones currently cached, I am able to fully trait each of the mythic troops acquired.

(Though, with the most recent update(s), I would need to reach Hero Level 18 before being able to apply traits to troops.

All this by simply logging in each day, collecting daily login rewards, and playing one (mini) game mode.

Oh, and I would link this particular account to the GOWDB, but apparently, one must reach Hero Level 20 to utilize the “My Collection” portion of the site. And, I probably will never reach that level at this rate.

Again, just another example of how healthy one can build an account solely through one game mode (Treasure Hunt). Certainly not a viable means of enjoying the full features of Gems of War, but an oft ignored method of bolstering an account.

And, actually, if you’re good at Treasure Hunt (say, you are able to create a vault every two to three minutes), it really is a consistent and efficient way to earn the four major resources early on in the game (gems, glory, gold, souls), while accumulating gem and glory keys in the process… by yourself.

Just another example of what silly people do, sometimes.

Good job, I myself do not have the patience nor the time to play the game like that. 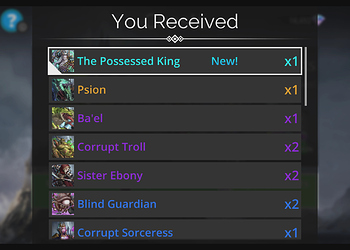 Nice. I do find it amazing what you can do with just TH. For me it would be way too boring, but I can acknowledge the accomplishments here.

your play style will be legendary! I’m amazed by your patience

I bow in awe before you, Sir !