Anybody else having this problem? It started about 15 minutes ago. It’s intermittent. I can do a battle and then it shows up. I can do something else and suddenly the message will come up and I have to kill the program. There’s no smooth way out of it.

Everyone here is already on it.

It seems to be smoother now. I have an early morning so time to call it a day.

Yeah I can’t even login to the game…

Yep, it got laggy and then non-playable. Can’t even login.

I wonder what the made-up excuse will be this time… Server migration? Oh no done that… New Kingdom introduced… ohno done that too… erm erm… Ddos attack… yeah let’s use that for an excuse!

I hear the peeps that’s stuck after a match will get points after each retry. Someone in our guild got +170 for his first match.

And I was going for a push this week. It’s enough facing shared accounts and bots, not also bugs that boosts points.

I’m currently attempting to fix the server problems… looks like our database got overloaded with requests.

Okay - I seem to have reduced the database queues… hopefully things begin to return to normal!

I’m back in, thanks Sirrian.

Edit: I’m in but I keep getting the server timeout error 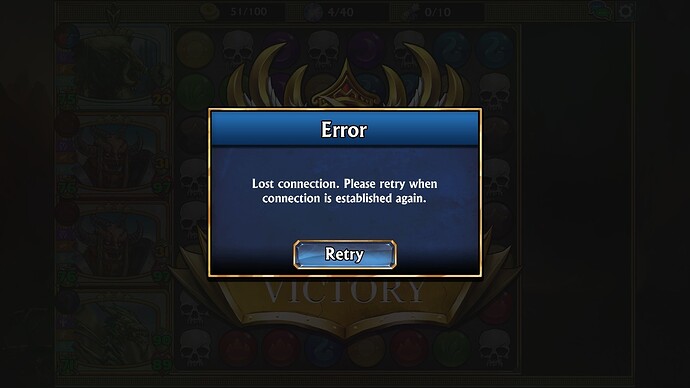 Time we send over Sirrian some caffeine boost to fix this problem!

yes same for me
bug for server connection

BUMP till we get some response

I cannot collect from kingdom, guild contributions, or wage war on enemy kingdoms. I can log in but can do nothing else.