Please do something about summon spam

It’s absolutely ridiculous having to fight 10 summoned units that spawned consistently after every single hit to an orbweaver hero on a 50% chance. Regardless of that orbweaver percentage being way too high in the first place, it’s definitely not actually 50%… I just don’t buy it. Then of course these orbweaver teams get paired up with a summon weapon and stealthy and death mark, steal life, bless, etc. Please add some kind of diminishing quality to summoning and ACTUALLY LOWER THE PERCENTAGES. This is so unfair, cheap, and takes zero strategy. I will likely be moving on from this game if something isn’t implemented by the next update. It’s just not fun anymore and nothing concerning these annoyances are being improved upon.

One of the coolest things about Gems of War is that there are so many combinations of unbalanced troops, you can field a team for pretty much any occasion.

For new players:
The above sentence is a heckuva lot harder if you’re missing a lot of hero weapons and mythics. Being in a good guild will help with the latter problem. As for weapons, ask around whenever you see a weapon on offer and people will tell you if it’s worth buying.

You left out, “…or playing the game mode where the summon spam’s specifically chosen because the team that counters it the strongest is unavailable.”

Bandit summon and spider summon need to be reduced to 25% asap.

Summon a response from the developers to ridiculous summon spam , well lets laugh together, its not likely to happen.

Curse : Create 1 enemy troop every 2 turns. 30% chance to be cured at the start of a new turn. Cursed troops also deal damage to themselves when using skulls.

Developer : Cause one developer to run around counter clockwise every turn. Creates 1 imp.

In all seriousness some summon spams go to godly levels. Makes me wonder where they all were hiding.

You know that stun gets rid of it right. Maybe knock the dust off of the cards you don’t use instead of demanding changes that are not needed is in order. Just went through an entire guild war and faced so many Meta teams that had summons but I can count on 1 hand the actual troops that were spawned. I use my troops and some times use teams I am not comfortable with but have to use or risk losing. At the end of the week 30/0 56,500. Not my best but I will take it.

If I was half as good as you I would be a Legend.

I doubt someone your level complains about summon spam.
It’s people that can’t even manage a color-of-the-day team in GW for every day. They face more problems due to the lack of flexibility to switch to other fully upgraded troops for every situation.

Would love the % dropped and actual limit to how many spawns. I played for 30min in a spider battle during GW this week before I had to retreat and take a loss. We both had 1000 health and there was 0 chance I could win. I stopped counting around 40 spider spawns. 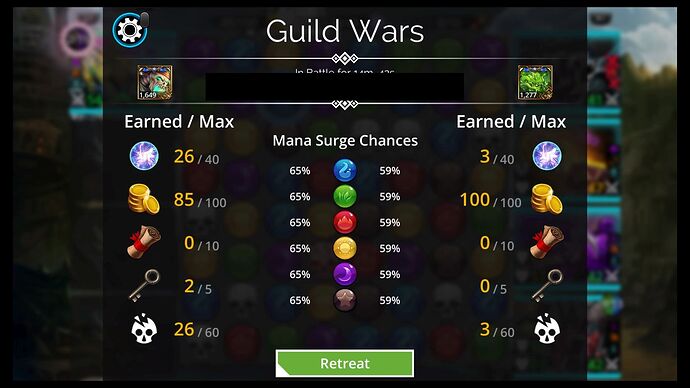 Can confirm summon can be counted on the fingers of an horse :3

Kinda hilarious the stun comment, like in GW you always got access to “stun everyone troops” AND you can always cast it before L&D cast and get blessed making you stun totally worthless.

I too killed every meta team this week, to then lose 1 match just today (vs a so called Zull team on which Zull was dead from the start lol) to a TPK that was always trasforming at least 2 troops each cast (so not only giving you lameass troops but have you at perma 0 mana too lol) supported to a sentinel that didnt failed a single turn to barrier 1 of them (at lest he didnt barriered Zully the first turn lol) and with a jar always full of mana.

Orbweaver is just lame (hence is still sitting in my pvp def and EVERYONE that think the same should do too seen the “devs” only bother if enough ppls use it), at least 50% of time i grab him with Ropedart he summon not 1 but TWO spiders too lol.

This week or the following week, AW will be in the soulforge. I’m predicting a significant increase in the number of people who will be using the l&d meta team. I know I’ve been saving up for him(her?). Then maybe the devs will do something.

You know you CANT stun someone who is blessed, right? You know that stun is only temporary right? I have many cards and am well-versed in their usefulness in various situations. I also rank high within my Guild in GW every event… thats NOT the point.

The point is how absolutely ridiculous, boring, tacky, and unfair it is to have to fight 10+ extra troops at full health when the opposing player decides to be cheap and use not only summon traits… but also weapons (you completely skimmed over that part huh?).

I have one card “Obsidius” that stuns all troops and it adequate for GW. But if they use Life and Death with Orbweaver you’re not going to have a very high chance of preventing these summons. You also get to have fun attacking them even more (with more chance of summoning) now that they stole 25+ health from your last 2 players, as well as having to combat death mark. Stealing health is also basically true damage so maybe 2 or 3 hits and those last troops are now dead.

Plus if they have AW you now have to deal with web and more summons. Summon needs to be FUNDAMENTALLY changed as it is too powerful in most of these scenarios. Yes this game has a rock paper scissors element to it, DUH… but if the other team has rock, paper, scissors, lizard, and Spock on their team because of unbalanced traits and weapons, well that doesn’t do the other side much good. If you don’t understand that then you simply don’t know what you’re talking about.

I mostly agree that summons have problems, but there are ways to consistently beat the Life & Death Orbweaver team. KeyLime did a YouTube video on few options. I used his Bulette team and won 90% of my matches against them.

I now just avoid the team in PvP though. I don’t care to waste time swapping teams and just choose the 2T option instead.

I couldn’ t agree more… This is fair because Heronath summon chance is also 25%.

Note that not all of KeyLime’s teams are available on a blue GW day. In particular, Khorvash is the only reliable stunner available, which is why the 5 L&D teams I faced had their stealthy hero in Slot 3. I’m not talking about PvP.

I thought I’d get wise and use some team rearrangers, but somehow every match I played that way involved my rearranger dying on the first Death Mark turn. I’m not talking about PvP.

Every single time this team/conversation comes up, I try to point out it’s the most problematic in GW where you can’t use all of your troops without penalties. Every time I point out “you lose 10% of the time” sucks when you only have 5 tries. Every time the people who know their success depends on L&D try to deflect it by redirecting attention to PvP, where it’s easy to either avoid or attack L&D. I’m not talking about PvP.

You already won that battle. There are not enough ways to curse and/or stun a slot 3 stealthy hero on certain GW days to dismiss everyone. I’m glad for rojo that he’s a perfect unicorn and wins 100% of his matches and never loses and also his uncle works at 505 and he gets all the new troops early. In the end I don’t even lose all that often to L&D. But when once a month I have to pay REALLY close attention to 5 matches, and 3 of those 5 matches go south due to luck, I’m not a happy camper. I’m not talking about PvP.

You’re trying to talk about it because you don’t want to have to come up with a better GW defense. Up your nose with a rubber hose. I’m talking about GW, and I think you should have to choose between more than one defense. I’m not talking about PvP.

I’m talking about ending a game that lasted 15 minutes where my side summoned 20 troops and the other side summoned 24. Neither one of us could really make a lot of progress against each other, and in the end I died because if you roll 10% death marks long enough they’ll connect. I’m not talking about PvP.

Oh GW. This is the “event” I care least about so I always forget it