Originally published at: Imp of Love Rework – Gems of War 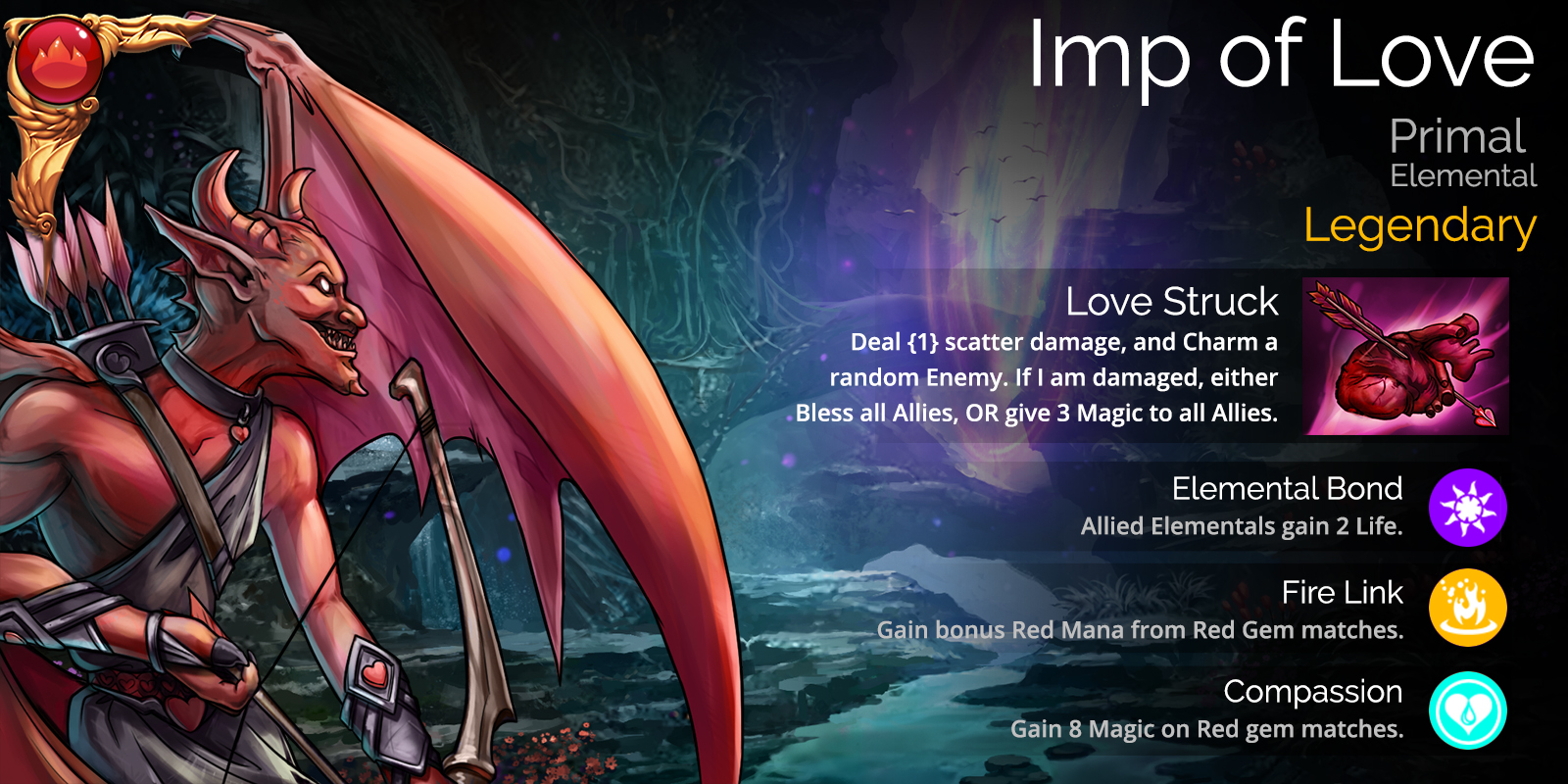 In time for his favorite holiday, the Imp of Love is getting a small rework. This will bring him in line with his siblings that have already had their reworks, Winter Imp and Spooky Imp.

This rework will be heading out later today, so keep an eye out for it - you'll see him crashing some battles on Feb 14th.

Does it activate on armor damage or only life damage?

Life only, or at least it should be.

I like this rework! Imp of Love is now quite strong, but not broken.

I’m glad this version of rework didn’t happen. Because if it did, he will be a literal Battlecrasher.

Looking forward to the other reworks!!!

Pretty sure both wounded and damaged mean life damaged, not armor

Yes, defo Dark Monolith dont do double damage even if you strip his armor, only if he miss life.

Ps: game is patched already so tried him, the “extra” dont happen unless the life is damaged.

Pretty sure both wounded and damaged mean life damaged, not armor

Both “damaged” and “wounded”, in the context of every existing spell, in game means that the troop’s life is lower than it’s current max life (ie., life is damaged). This is not to be confused with traits that trigger “when I take damage” (unless “to life” is also specified), which can trigger when armor is damaged, even when armor is reduced by stuff that wouldn’t otherwise be considered “damage” for the purposes of, for example, interacting with barrier (eg., Golem’s spell, which reduces armor only, will trigger Orc Armor but not interact with barrier).

Just another thing to add to the pile of stuff to make clearer when they do their description pass of all spells to make language consistent.

In which chests is this imp available now, and for how long?
Thanks

Imp of Love should be in Glory, Gem, Guild & VIP i think, as for how long i would suspect until the Spring Imp is put in.

Love imp is available until the end of march

This is totally false. Imp of Love and Spooky Imp are nowhere near in line with Winter Imp. Without True Damage, it takes way too long to get to a decent amount of damage.

Defo winter imp is the best of the 3 (i was lucky enough to get it on pc account, missing valchy and so but was still really good) but i would say Love is way behind Spooky too, why it need to be wounded to do the “this or that”?

Leaving aside that if enemy stripped your armor and already taking away hp’s neither of the 2 effects will prolly save you.