Welcome to part 1 of a series of previews for Guild Wars.

Firstly, because it’s the most asked question we receive at the moment - Guild Wars are still about a month away.

Why is it taking so long?

We kept trying things, but weren’t happy with them, so we kept starting again. Server migrations & Holiday Season happened in the middle of it too, so we lost a bunch of time.

What is the Central Idea Behind Guild Wars?

We want the Guild Wars system to check a whole bunch of boxes:

So we’re going to kick things off with a couple of screens… not the most interesting ones… they’ll be coming later.

Firstly we have the Guild Menu, with the GUILD WARS button. That’s one way you can get to the Guild War… we may also surface the button onto the World Map… we’re still working on the details of that.
The large GUILD WARS button will be pulsing if you have a Guild War Battle still left to fight today. 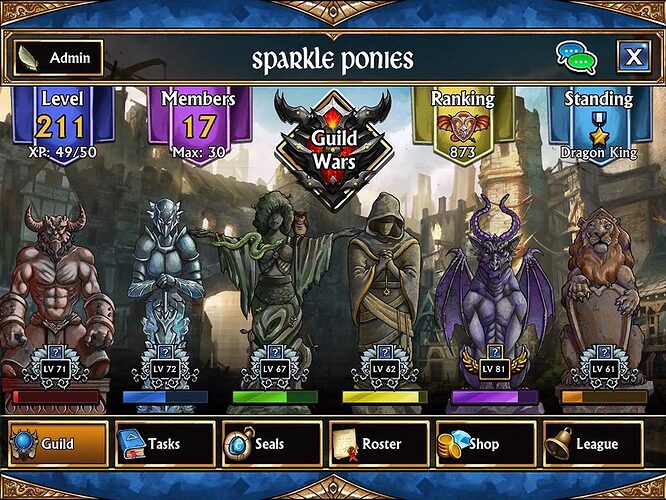 Now we’re into the Guild Menu proper. This is the Registration Tab.
It not only allows you to register for the following week’s Guild War (there is a new one every week), but it also shows you the previous week’s results (and a How to Play section that quickly scrolls through the key 5 points of our Guild Wars system). 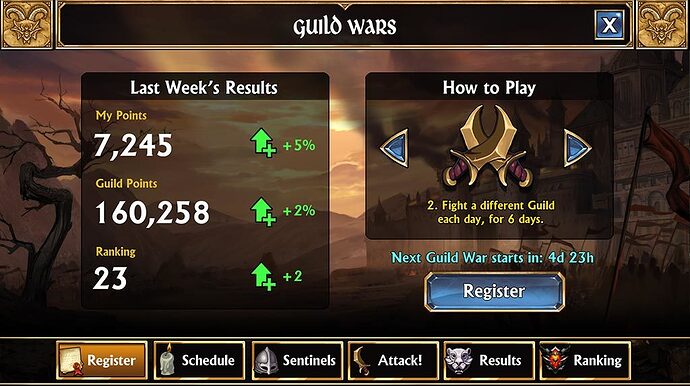 How does registration work? Pretty simple… Guild members of rank 1 & 2 can register any time before weekly changeover to play in the next guild war. If you don’t register, you don’t play - no exceptions - but it’s as simple as a single button press.
Why do we need you to register? Well we ONLY want active Guilds in the war, and we will do the entire week’s matchmaking before the first battle is fought (on day 2 - the first day of every week is rest day for Guild Wars).

That’s all for now - you probably have a bunch of questions, but we’ll be back with a look at the SCHEDULE tab next week to explain how that all works!

Guess who will coment on this topic first!
Here we go!!!

Happy with the given informations, seems like a lot great stuff incoming, waiting for the next week to see more details, so i will refrain from asking anything

Seems like a really high ranking… Will there be changes to the current permissions system?

I have been very curious about this feature since it was first announced you were working on it. What you’ve given us so far looks very interesting. Can hardly wait for more info.

My understanding is that you need rank 1 or 2 to register for a given week, but that the entire guild plays.

My understanding is that you need rank 1 or 2 to register for a given week, but that the entire guild plays.

Probably like this, or lower level guilds wont have many players actualy doing the battling.

Makes a lot more sense than what I was thinking ^^ Thanks.

This tease only makes me want to know more about it.

If the entire guild plays, isn’t this only going to further encourage building guilds out of as many elite players as possible?

It seems to me a more effective approach would be to have the guild choose who they want to fight. It could be everybody or the guild could choose “heroes” to send out on the battlefield.

If it’s everybody, then guilds without 30 highly active members are going to get crushed and casual guilds might as well not even register.

The best Guilds with the best players need to be able to stand out and win (sounds obvious? but it’s a thing you need to constantly consider when you design scoring systems)

To be fair, neither of our quotes are followed with any meat whatsoever, so how they encourage these things is anybody’s guess.

I’m just saying that the subsequent speculative discussion about having ALL players in a guild participate could be a real problem for the vast majority of guilds. Nothing Sirrian said really touches on any of that because it’s too vague.

Yup. My point is only that they treat the concern you raise as a top-level bullet. Feel free to speculate away, but to me, there’s not enough actual meat here to dive into.

That registering thing is a nasty problem. The ‘another thing to do’ part is irritating, although I guess in a guild with 5-6 rank 2 people plus the leader, someone will hit the switch. But it has to be done on account of that activity thing, for sure…

See my previous response to @Lyya. I was responding to the discussion, not directly to Sirrian’s post. Primarily because:

The carrot has been dangled and I am anxiously champing at the bit for the next nugget you choose to toss our way.

My feelings exactly! Can’t wait for more info on this. Great to see screenshots too, makes it seem much closer

I like the basics of the concept you’ve described, but this single line worries me immensely:

That means you’ll either have to fix the chat, or that you’re going to force people to communicate outside of the game (and I don’t really want to be forced to go to other means of communication just to play a game. Let’s just keep it all in the game, OK?).

So are there improvements to the chat planned for the guild wars update?
Because if there are no improvements planned, and communication is going to be important for Guild Wars, then Guild Wars are going to be terribly frustrating and probably fail spectacularly…