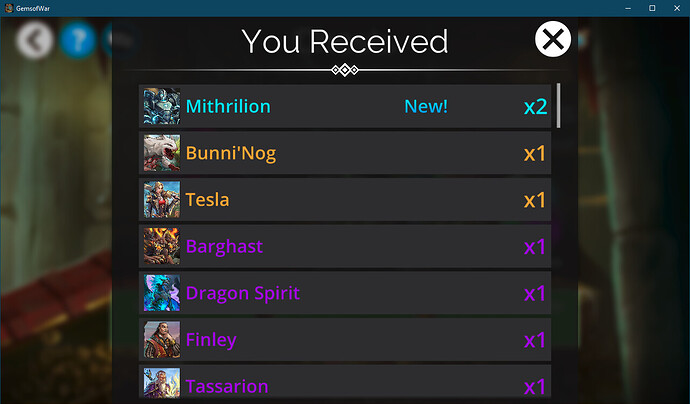 Also. Thank whatever deity you want that this no longer has Worldbreaker’s trait as its first. That was driving me nuts.

I never understood why he couldnt be a mix of two races, increases the playability by quite some. Other than that a good defensive brute.

Got with only 200 glory keys. That’s a first for me. First time I’ve ever gotten a new mythic first week as well.

Dude is a tank for sure, but might be limited due to being just a Construct.

(Probably next Mythic the RNG will take revenge…

Because the advertised drop rates are bull shit when the code breaks down and starts to be too streaky.

I cant remember exactly but was within 20k guild seals

Because the advertised drop rates are bull shit when the code breaks down and starts to be too streaky.

I’ll blame it on parallelism. Here’s a good example. Picture above: how players feel RNG should distribute numbers. Picture below: how these numbers are distributed in real time.

I’ve had issues in the past with some items not showing up after purchasing in part due to the quick resume feature on my xbox series x. I hope that isn’t the case for this mythic, possibly preventing me from getting this card.

As of right now, I spent 2k gem keys, 8k glory keys, and 43,000 guild seals (plus the 8k I had previously) without any luck. I’ve never had anywhere close to that bad of luck. Ouch!

EDIT: I closed out the game and restarted it, dropped some more guild orbs, and got it on my second set of guild seal chest pulls. Coincidence/Bad luck RNG? I’ll never know. But for anyone on an XSX, better safe than sorry I guess.

in part due to the quick resume feature on my xbox series x.

Quick resume is garbage when it comes to any games that save on the server. Best to be used with offline games.

I think that more represents how organized IP2 is. A band of monkeys slamming keyboards would be more consistently correct than this team.

As I have said before a company with 250 million in sales selling for 5 million is a huge red flag.

Most games use a certain formula for RNG and for some reason, while it’s very random over the long term, it’s streaky as all hell. I see it in FFXIV when gathering. You’ll have a 99% chance to gather and missing like 3 times in a row more often than you should. Meanwhile, you’ll only have a 15% chance for HQ and get like 4 or 5 HQ items in a row.

Fascinating, but why on earth do you want three of these?

Uncle Rambo had to spend all his 230 gem keys and 1290 glory keys without getting it. He is furious he says. Tried to tell him that Mythics is hard to pull, but he dont wanna listen. Oh well…

Uncle Rambo should have saved his stash for a better mythic…

I told him, but he got a brain like a chicken.