Check replies in this topic:

Originally published at: https://gemsofwar.com/a-new-mythic-approaches-pan/ New Mythic Troop: Pan Pan will be the only Mythic Troop available in Glory, Gem, Guild & VIP Chests for the next 7 days.

If what you’re saying is really the case, you’ve been unusually lucky so far and that is quite weird instead of you having relative difficulty with pulling the mythic today (what is absolutely normal).

To throw in some rough number, take this scoring sheet:

On average you need 10000 points for one mythic. Your score is 8000 points for 1 - 2 mythics, which is about twice as much as is normal. You might want to lower your expectations, karma will eventually catch up with you.

I realize these are rough numbers, but it is really interesting to look at it this way. I had looked at them individually (e.g. 10k glory keys for 1 mythic) but hadn’t considered adding them up.

Apparently I have yours. 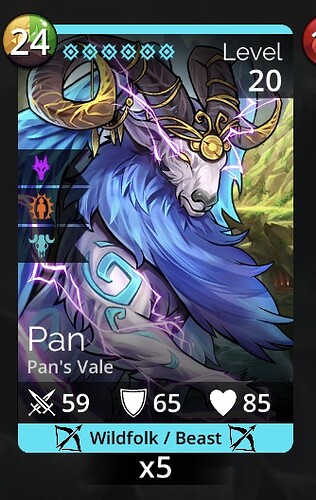 I think keys are the only true rng in the game.

For every lucky person, there will be an unlucky one. Perfectly demonstrated in your house it seems!

Last Mythic I got with the second lot of Gem Keys.

What the RNG giveth, the RNG taketh away…