With the release of the 3.1 update comes a shiny, fresh new Known Issues thread!

EDIT: Now that we are all on Unity, we will be combining our known issues threads! Woo! Please make sure to let us know what platform you are playing on when you report a bug.

Without further ado, let’s get started.

2 Likes
3.1.5 Patch Notes (PC/Mobile & Console)
Troops are not showing the respective kingdom
Problems after the update
Can not buy daily offer in dungeon
Impervious trait
Trait -Impervious- Bug
Impervious and other traits - When will they be fixed?
Devour bug after update
Sunbird is broken (iOS and PC)
Screen don't fit after update
[BUG?] The Kingdom's icons dissappeared from cards, since last patch
Devs, enough is enough, Communicate!
Ozball August 31, 2017, 1:13am #2

Sounds play in Soulforge regardless of sound settings.

Friends The Great Maw was able to eat Mega-Elemaugrim in the mega-boss dungeon. No stun active (no stun troops). She submitted this through submit a bug, I thought I would mention it here.

When I upgraded on Android, my icon for the old version disappeared, and I had to re-add it to my screen.

I’m sure this isn’t a bug, but I think it should be noted in the thread to save support some time if people get confused.

I’ve been getting that with a lot of my android apps lately, it’s a pain in the arse.

Strangely in maximized windowed mode. Portraits will sometimes no snap to the edges. They did before, but not now. PC by the way. 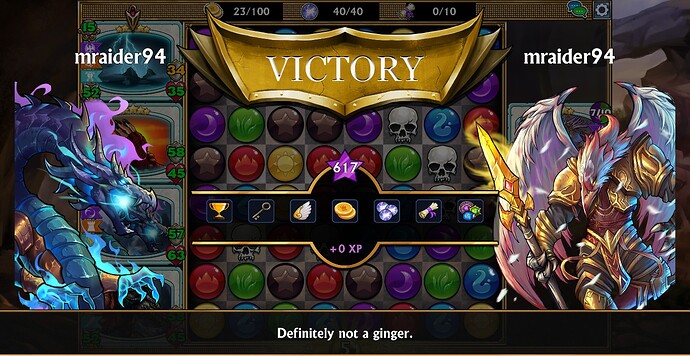 [IMG_0791] My bug shows the deal as $0.00. Trying to purchase just spins the wheel a few times and does nothing (good for the devs). Even after fighting first boss, still shows up that way.

Is Xathenos meant to be one of the four mythics this week? He’s currently craft-able in two separate ways (weapon combine and usual mythic craft of souls and celestials)

Display issue. Are the quest line gems supposed to be unequally spaced? I am on iOS. 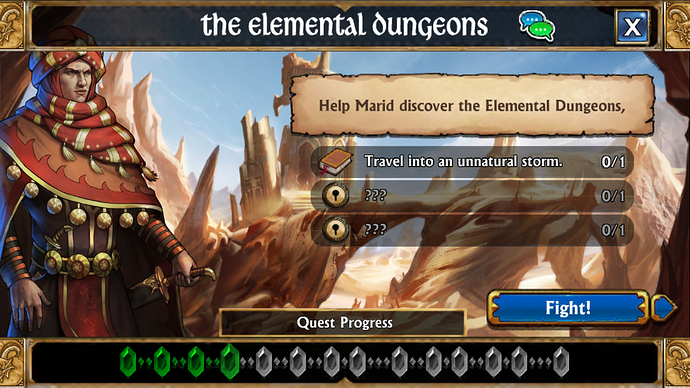 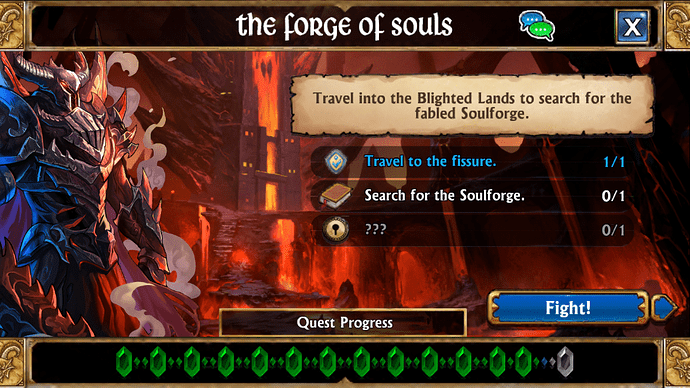 I believe it marks how many battles you have to fight in each quest.

Yup, each dot between them represents a battle. So you’ll see in your second screenshot you have 1 dot filled for the Travel to the fissure you’ve completed.

I got sniped by both of you!

Workarounds: Turn Power Save ON

Speculation:
Depending on the version of Unity used, the crash could be caused by this: Unity Issue Tracker - [iOS] Crash in UnityRepaint() when resuming the app with different landscape orientation if running at 60 FPS on iOS 10
(I’ve run into this particular crash personally in the past, and I’m guessing Power Save locks framerate below 60.)

EDIT: i submitted a proper ticket through ZenDesk https://gemsofwar.zendesk.com/hc/en-us/requests/41297

Something weird with chat: When you open up to chat on iOS, the box no longer spell-checks/auto-corrects. Can we please have this fixed? I’d wager most of us are not spelling bee champions…

Also on the topic of iOS chat, how can I disconnect from it? There have been so many long-standing issues that I want to leave it off permanently. Can’t figure out where to do that, since there is no obvious Disconnect button now.

Down arrow on the chat window should give you a box with Disconnect in it.

Is Xathenos meant to be one of the four mythics this week?

No he is not. I’m rolling out a fix right now (so buy him cheap while you can).

Another chat issue: The size & location don’t persist across sessions. I closed it out to try to buy the Daily Deal (still no luck on that! why won’t you take my money?!) and noticed it had reset. Fix plz thx.

Pointed out in global chat ingame:

Troops no longer have their kingdom emblems in the bottom right corner of their cards!

I thought this initially only applied to Xathenos in the Soulforge, but it seems to apply to all troops in the Troops menu too.