I’m noticing that Plague with impervious is still getting devoured by kraken. It happened to mine in one fight and then a few fights later my kraken devoured the other teams plague. I went back and checked the battle log and the other plague was fully traited as well.

It just happened again where my plague was just devoured by a kraken.

Minor issue - I have sound off - and music off

But when I am in soul forget I hear the clicks of the buttons (Level, Jewels, Traitstones, Troops, etc…)

I am also seeing the crash-on-unlock on iOS, which makes the game fairly unplayable considering how often I lock my phone.

@Taisiakat and @Lyya I’ve added both those issues to the list now!

I can’t change teams in any battle except by replacing individual troops. Also the filters don’t work so this is even more tedious.

How do you mean exactly? You can’t change which team slot you’re using? Is this in all battles or only PVP or GW etc? Also which platform are you on?

Guild announcement is still 40 characters max. This is severely not enough!

Also can anyone read troop names and troop types on a phone screen? I can’t 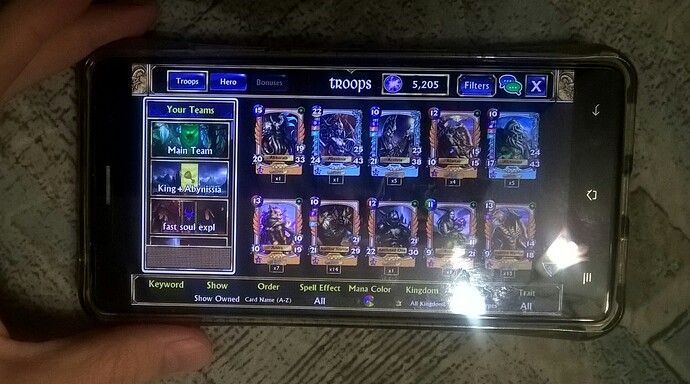 I believe I’ve mentioned this in the UI improvements that 10 troops per screen makes the cards too small to read.

I just had Impervious Wulfgarok killed by Mab’s Mana Burn, so Impervious has issues now.

I just had Impervious Wulfgarok killed by Mab’s Mana Burn, so Impervious has issues now.

yea I mentioned it up above but got no feedback so far.
Plague is the same.

What device are you using?

Can you try putting the game into Power Saving mode and see if that helps?

To turn on Power Sving, you will do the following:

This will switch the games frame rate from 60fps to 30fps.

For anyone else who is also getting crashes or lag while playing the game, we also suggest trying this first.

I’m playing on an iPad mini with latest iOS.
In a battle there is no option to scroll through my teams, ie. There is no x at the top of the box. I can Edit but when it goes to the list of troops the other teams aren’t shown and the Edit box changes to Rename Team.

When I go to troops outside of a battle my teams are all there and I can select another team but when I return to PVP or Explore it is still the same old team.

I have done all my GW battles for today so I can’t tell what might happen there, but fortunately the team I am stuck with is my blue team so it will be ok in GW for the next day.

The filters don’t work at all, except for the text box.

Hope this helps you find a fix.

You should be able to tap the Name/Banner panel for the team to collapse it and list all your available teams. This should work in both the pre-battle screen and in the Edit team screen.

Not sure about the filters, they’re working for me on Android, does anyone else on iOS have problems with the filters?

A question. Does the defense color preferenses affect only your pvp defense or ALL your GW defense teams as well?
Because that second scenario is extremely unfortunate!

Does the defense color preferenses affect only your pvp defense or ALL your GW defense teams as well?

Works on PC and Phone, but cannot play the game on IPad.
The game doesn’t even turn on. It just kicks me out as soon as I try to open the game.