Did you make sure you downloaded the new update?

A full board of skulls still resolves as a single match 5 and grants attack +2 base damage. A board with some holes in it will resolve as a combination of multiple match 3s, 4s, and 5s, depending on the pattern and generate much more. Skulls are different than mana, since you arent supposed to get credit for more damage the more skulls you match away, 4 skulls is +1 damage and 5 or more is just +2, whereas mana you are supposed to get mana credit for extra gems matched away, 4 mana for 4 gems, 5 for 5 gems, 6 for 6 gems and so on (plus surges, links and banners, with 5+ always surging).

This board, for example, resolved as 3 match 5s for skulls and activated 3 match 4/5 traits 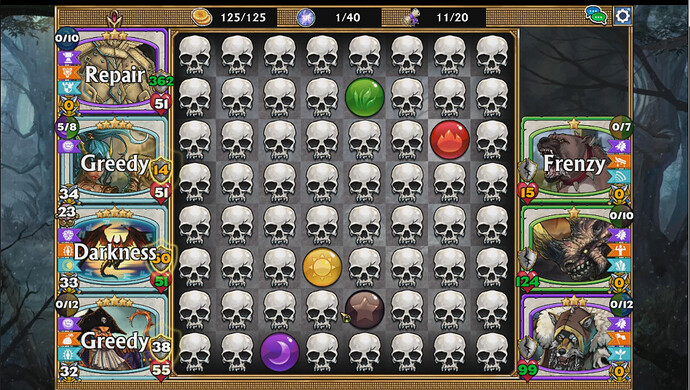 More holes with more defined clumps will still deal even more damage and generate even more trait fires. By a lot.

Incidentally, a full board of mana also resolves as a single match 5 (though I can’t really tell how many gems you get credit for and thus much mana it generates currently). The problem with multiple matches resolving containing one or more gems in common seems to be restricted to smaller clusters, possibly just those with sections that do not contain portions that can be resolved as a “line” match 5. In other words, even almost completely filling the board with mana will generate less of an impact than a few distinct tight clusters, both in terms of mana gained and number of trait activations.

Finally the thinking is starting to be more sound since it’s a gem matching game with some rpg aspects to it, strategy is key to plot the next move and this is what makes it more enjoyable not just looping a team and killimg your enemy in a few seconds lol. I hope the thinking with changes to come stay along this line of thinking imho.

It is now, and is something we’re looking in to. Unfortunately it’s not as simple as Impervious / OneShotSpells.

You can kill three enemies with a kraken cast, there’s nothing wrong with that.

I don’t know why people insist it’s a bug. Kraken functions EXACTLY as it is written. It’s not a bug.

That IS the case. As @moons said, it is not a bug. The definition of a bug is unexpected behaviour, which it is not.
Apart from that is the discussion if it is too op and that is somewhat subjective.

The only exception to this behavior is the Kraken, as his devour does trigger after the damage (which is why his spell says, “Then there is a 40% chance to Devour”).

but as your quote says seems intended so ill drop it

I love how they removed mana surges on 4-match but left them in for 5-match lol. Did they forget you can make matches higher than 4?

You must be a console player, or an extremely new player. On PC/mobile, 3/4/5+ gem matches have always (with the sole exception of the time between 3.1 and 3.1.5) worked the way they do now.

Forcing Power Save on with this patch is… gah. I understand the reason (at least personally, GOW instantly crashes if I lock my phone with it running and Power Save off) but not informing people that their game now randomly looks so awful and laggy and plays so poorly on purpose was a poor choice.

At least put a banner up that says “we did this deliberately, here’s how you can turn it off but beware the consequences”.

how exactally does this help with wisps? I just lost three GW matches in a row in one turn. ONE TURN

I was wondering that because I was seeing mana surge on 4 and 5 matches today… It was very strange. And I thought they had removed mana surge.

especially with Trolls - not sure what is going exactly with matching like that.

Has it been mentioned anywhere as to why the kingdom symbol has now been removed from all troops? I can’t find any way at all now to tell which kingdom a troop belongs to.

Here is the status:

Kingdom icons gone from cards. STATUS: This is intended and may be addressed in the 3.2 update.

EDIT: I accidentally removed this post so i reposted it. I have messaged Salty about it, then i saw that Lyya is a mod so she can probably correct it as well. Not that it was a big deal anyhow

Intended??? Whose idea was it to remove them? I can’t think of any possible reason to do so.

Will this - forced push to Mobile take care of us who updated but every time we log in get asked to Accept the update 6 downloads?