When you get a green orb 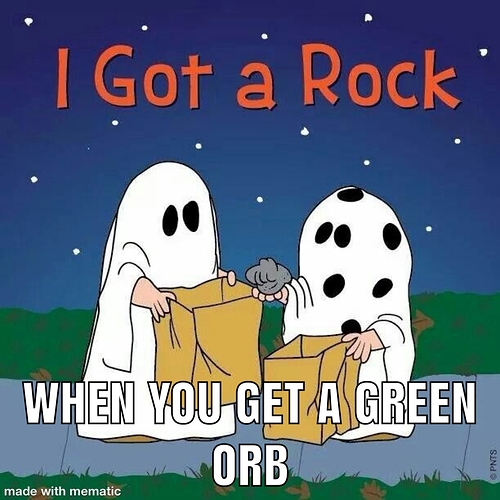 dont forget for new players the green orb must be tasteful in some cases.

Yeah I hate getting them so much I thought I had a gajillion rocks. Looked at my inventory the other day and it turns out I don’t even have enough to craft a Boss card… I know a lot of people say Enraged Kurandara is not worth it but I still should horde all my orbs just in case another Boss that doesn’t suck comes along…

It is disheartening to get for event rewards when you and guild work so hard. I hate it! I started saying I got a rock in guild chat and most in guild now say it too. FYI I’m leader of Shark Tank on Xbox. I may have some openings soon. Hit me up on Xbox @ Net Sh4rk.

Appreciate the invite but unfortunately I’m on ps4. Sometimes my brother is over when I’m opening chaos orbs and this guy will pray to the gods for me to get a green orb just to break my balls. Joke was on him last week though… he pulled two Shades of Zorn from guild chests last week.

I am lvl 1200 plus, the bounty even prior to one we just had, i completed it and every orb it gave me was GREEN!!! I was fuming for the time it took me.