Reduce the number of clicks when doing Explore mode

Similar to Challenges, I would like to have the ability to ‘stay’ in Explore mode instead of after every battle which right now sends you back out on the kingdom map. Most of the time when I am in explore mode it is for Trait farming (arcanes and runics) and that takes a bit. I just would love to reduce the number of steps.

I have it on good authority this is on someone’s to-do list.

I make great cookies… and awesome cake if that helps?

I love cooking – though after yesterday’s foodmageddon, I’m kind of “kitchened out” for the next few days. Luckily I have enough leftovers to feed a small army…

P.S. On-topic, I agree with the QoL request, the game has arguably too many clicks already in golden-path scenarios. 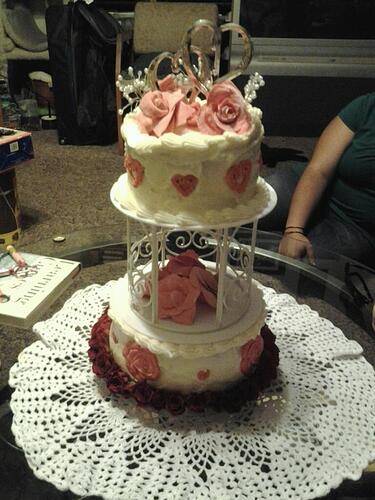 We didn’t do anything yesterday per say because my husband is still recovering from his surgery.

Thank you. I want to do something for New Years this year. Haven’t figured out what exactly just crystal plates and lemon champagne cake.

O.o That’s…fantastic. I have exactly none of your skill. So jealous!

I’m envious of your programming skills. I used to be pretty good at html and dhtml. But wow…you’ve done a great job of the troops/kingdoms site. Each of us are creative in different ways

I think they should add MORE clicks. The additional click should be an option to use a map for better payout.

This would be far more convenient especially as, for me, the main screen takes a bit of time to load. It can get aggravating if there’s a lag.
@Shimrra can’t remember which post but yes I saw that it was on the to do list as well.

I would like to have the ability to ‘stay’ in Explore mode instead of after every battle which right now sends you back out on the kingdom map.

I agree 100% with this statement/request.

Hi, new poster, but I would like to have basically a survival mode or marathon on explore where you pick you troops and try and win as many matches as possible and the rewards are cumulative. So basically you start like normal and after you beat the team you were against you keep what ever stats and cards you had once the last round ended. So if you lost one of your troops you start the next match (automatically) against a four card team and you only have a three card team. The souls/maps/gold counter would reset and you would ‘bank’ one turn stone and the souls/maps/gold you earned from Round 1. Retreating or losing would basically allow you cash out your bank.

Just my thoughts but any improvement would be much appreciated.

I love the idea of a survival mode like that! The concern I’d have is that some teams can turtle up and grow stats unbounded; after a while they’d become completely unstoppable no matter what you threw at them. The game is designed around a per-match “reset button” and turtling teams would have to be balanced accordingly.

Perhaps there would be a stipulation that all player troops are capped at initial stats when the next “wave” arrives (so they could be weaker than initial, but never stronger)?

I am not sure that I like the idea of a reset that can only work against me…kind of feels like the game is “cheating” that way. The sense of loss is there because of the build up when playing the previous match, and that sense of loss makes a player feel uncomfortable even if they do not know why they feel uncomfortable–although, I think most would understand what makes them feel out of sorts with the game at that point.
A better method, I think, would be to give a little bit of swing either way. For example, you can go into the next match with a negative balance of powers, or a positive balance of powers but the % that is able to carry over to the next round (positive or negative in number) would be set. So, if you set it at 30%, then someone who starts with all stats at 10 in round one could possibly gain or lose (reward/punishment principle) up to 3 stat points on each stat depending upon where they left off at when match 1 ends. If they were ahead by more than 5 stat points, they get to keep 30% of those points which would be seen as a reward for successfully adding those points during the previous match…it would always be based upon the starting score of the match. %'s would them be more evenly balanced based upon the card choosing skills of the player, rather than luck…I think…lol

+1 I fully support reducing the number of clicks in all forms in this game.

Continuing the thought of a marathon / survival mode, Bloons TD 5 did this with “Odyssey Mode”. A fixed number of lives and X number of tracks to complete. Complete the entire challenge and earn an increased reward. I enjoyed the concept there and definitely would here.

Imagine this concept on a guild-wide scale. The devs could create “raid encounters” with troops that have incredibly powerful abilities and crazy high stats. Complete the “Odyssey Mode challenge” for a poke at the guild raid. Let’s say I take first strike at it for my guild and end up doing 20 damage to 1 of the troops, the next person to take the challenge picks up where I left off with the army being minus those 20 points.

For that matter, reduce our automate most of the clicks in PvP. It take forever to load the game and wrap up the game! Can there be an option to skip the screens to the end and see all the treasure and stats as a batch?

IE, complete a PvP match, see the Gold/Glory/Level screen and then jump straight to the 3-PVP-Opponent select screen?

Could we please get an eta on this… imo, with explore mode being part of the weekly events more frequently, this should get priority. It really is a crazy click fest, for no reason at all.

I really hope this will be fixed soon…