Does anyone know why I am getting this daily offer? 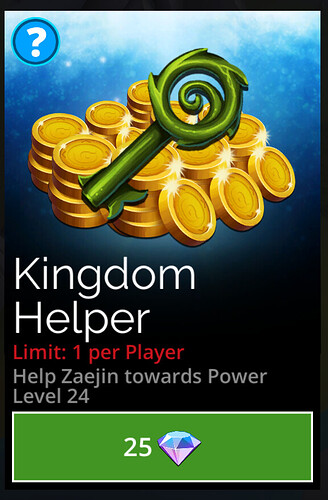 It says (Help Zaejin) but when I look at Zaejin, I see: 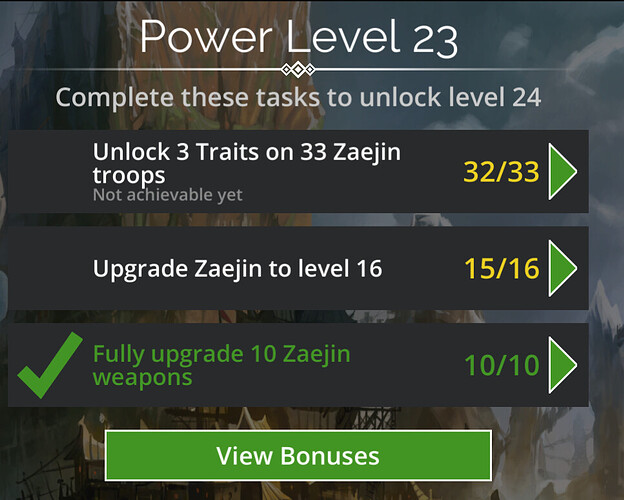 So I am a bit confused.

Kingdom level 16 requirement has nothing to do with event keys.

Does anyone know why I am getting this daily offer?

Because you have an open tasks that requires you to upgrade Zaejin from 15 to 16.

Kingdom level 16 requirement has nothing to do with event keys.

The “explanation” the devs gave is that upgrading your kingdom also costs gold, so the offer is actually super helpful and working entirely as intended. It’s been a controversial topic for years now, the devs see no reason to change it, no matter how much it punishes players.

So I am a bit confused.

Better get used to that feeling. In two months several kingdoms will hit the task that requires upgrading to level 18, which is entirely impossible with the resources that can be obtained, no matter how much you play or pay. Yes, the topic has been brought up, so far the devs don’t even deem us worthy a response.

Its badly implemented and presents options that do not help. End of story, unfortunately.

Thanks @Fourdottwoone. I imagined it would be related to an open task, but never imagined the reasoning would be like this. Sigh.

It’s about as stupid as when you get an offer for ingots when you got hundreds/thousands of them and all your weapons are fully leveled, and you’re actually missing the weapons themselves… which you can’t obtain via those “helpers”.
[edit] I also love getting “helper” offers of epic troops when I already have those troops at full mythic quality, and am actually missing a mythic.

Most of those helpers are not only tone deaf, but blind too. And in some cases insulting.

Yeah, I hear you. I knew about some of the ones that you mentioned (still weapon blocked on some kingdoms since I am missing old weapons) but the one that I posted was new.

Its also frustrating when you go over level 15 on some kingdoms and all the daily pet offers stop. I miss those pet offers!