Put hex colours in front of the team name in brackets.

Sorry if you get a duplicate, but everything in a game like this can dupe so temper your expectations.

Your data is skewed, you need to factor in a large amount of data before making conclusions. 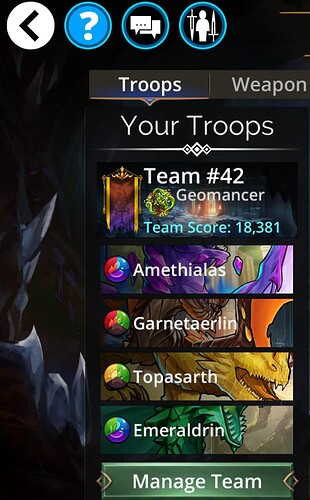 image622×1002 74.7 KB
Now have 4 unique dragons as of this morning after opening 5 gem dragon eggs total since the update.

It’s all downhill from here as before I had good odds of getting one I didn’t have. My body is ready for the oncoming disappointment.

Superb start at least, got 3 of one dragon here, out of 4 tries. I am littrary shaking of anger this morning.

Oh man, my sympathies. I am dead sure I’m heading that way in the future. Now that I’m down to 33% chance of getting a unique one, I’m not relishing trying to get the last two I need.

I’m also missing one gem dragon for each of the craftable weapons, so I can’t start working on those yet. I’m wondering if the least heart-breaking strategy going forward is to get enough Dragonite to open multiple eggs at a time with the hope I get the last two quickly and then can use the stored-up Dragonite to craft the weapons. At least my disappointment would be all at once instead of each time I can craft an egg…

A bad start I hoped to avoid, as a good ending simply wont happen. So kinda messed up.

3 eggs and 3 dragons no dupes, the next one will be. but that is gems of war. RnG everywhere

3 eggs and 3 dragons no dupes, the next one will be. but that is gems of war. RnG everywhere

It’s not what a lot of people would want to see, but that’s the mathematics hidden behind the curtain. So if you’re 3-for-3 right now, you’re probably “ahead of the game”. Sad as that may be.

I’m exactly where you are. Got a duplicate green dragon, and all the dragons you have as well.

Not sure what I’m going to do. Probably will not be able to resist the pull of the egg once I have enough dragonite.

Even though I don’t play this anymore I still come in just to watch the disaster that is this community. Lo and behold it’s still the same people crying about the same crap just dressed up differently. You know what you guys shouldn’t do? Play the game because whatever the hell you guys have been doing throughout the history of this game sure as hell isn’t working.

My favorite part about this thread is the fact that they outright just said it’s not a bug. 20 bucks says the admin guy that updated this thread to ‘not a bug’ was laughing his head off when he did it. Shout out to the guy that did the well placed kick to the balls with the ‘working as intended’ post.