New custom Gnome “Allwan” he drops Dye Potions that enable players to change the color of any orb to another color with certain perquisites/requirements in the soulforge. 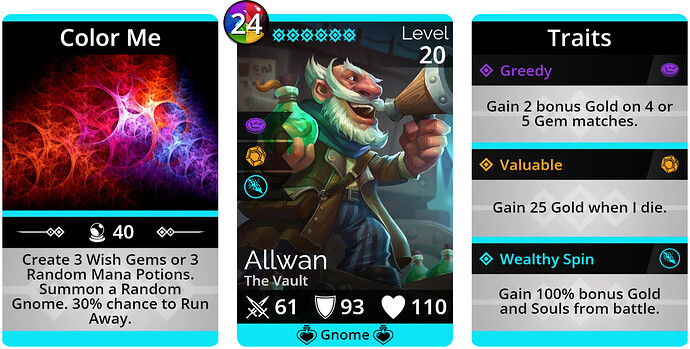 He drops dye potion or potions at the end of each battle similar to the cursed Gnome dropping Cursed Runes.

How does he drop Dye Potions? Nothing in his ability or traits mentions them. Also, it would never happen.

Same as the cursed gnome, instead of Cursed Runes, he drops dye potion or potions. 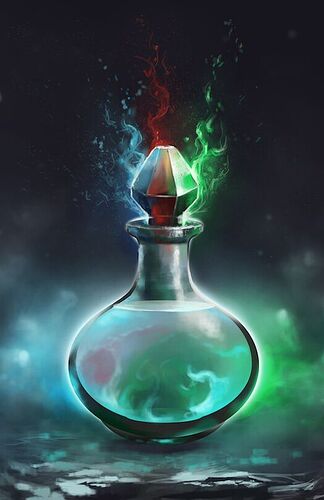 Don’t we have enough varities of gnomes dropping stuff? Do we really need another to further dilute the pool from the handful of gnomes we want to see?

Do we really need another to further dilute the pool from the handful of gnomes we want to see?

+1 on this, although fixing the gnome pool dilution problem (so that gnomes have independent chances of appearing rather than subdividing the “a gnome appears” chance) would be nice too.

TBH though if you play the Vault weekends appropriately orbs … kind of are no longer a problem?

Mostly this proposal seems like a stalking horse for that 3rd trait: a 100% gold boost without any color restrictions? That’d be a great 4th-place dropin for gold-farming low faction assault levels.

The trait appears to be for both gold and souls so he is Cedric and Pharos-ra together. But also don’t think the orbs issue is that big a problem. Cedric is ok but if you want the maximum gold per hour he is too slow for use in teams as opposed to a team that might include the lower gold increasing troops like Egg Thief that can at least help provide mana with Zuul and hero packing some kind of weapon like rope dart. Fast Explore 12 modes with a small gold boost tend to amount to more gold than trying to slot in Cedric and maxing the gold each battle and them taking 2 or 3 times as long. This troop would have less mana blocking issues but like Cedric would not really help in clearing the modes any quicker the wish gems could backfire the mana potions could be handy but if he runs away sometimes he wouldn’t be a very reliable troop for mana generation Egg Thief would probably still fare better for gold per hour. I do highly commend the effort though and appreciate the ingenuity! This is just constructive criticism and feedback.

Same as the cursed gnome, instead of Cursed Runes, he drops dye potion or potions.

That’s exactly what I mean. Cursed gnome drops cursed runes and it doesn’t states that on the card.
Thanks friends on your feedback. It’s just a new way to convert these useless orbs into something you need.

Thanks to Gnome-A-Palooza and all the VKs they bring on vault weekends the point in which you have already gotten all the use out of them you could is much quicker to reach for most players. Once you have a couple copies of Zuul and EK and ascended all the troops like gnomes and GW troops and dooms that take a long time to get that many copies of you run out of any use at all for the orbs. I only started almost a year ago now and I am already at that point. When I get a mythic that is new to me I immediately level and trait it use traitstones for the first 2 traits and then using a minor orb of wisdom to save the celestial traitstones. It might helps players get to that point a little sooner if they are lucky enough to run across these gnomes but we all will eventually reach the point where green or blue the orbs are basically worth just as much to you. 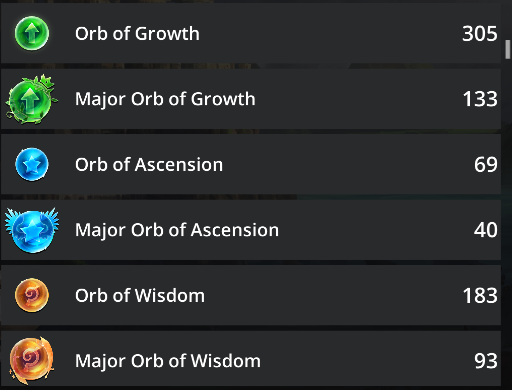 What they really need are more things worth spending the orbs on and then these might provide benefit but for a lot of players a gnome dropping dyes to turn green orbs to blue orbs is less useful than a red gnome that might give a few keys or some gold and thus dilutes the pool of gnomes. For the players that might get the most use out of these dyes it might be hard to get the resources needed to convert the orbs.

Oh… you want an entirely new resource? Don’t we have enough of those? o.O

Before another resource is introduced into the game, I would rather like to see a new Gnome that drops Writs.