Alright, played a bit with krystenax and while the spell is good, enchanting is really not great.
Too little, too slow. And to gain that on purple match without stacking is underwhelming.
While I appreciate the
Reference to EQ, it needs a boost:
Ticking during extra turns
More mana per round
For Krystenax flat amount of mana received when matching purple

Just ideas, maybe there are some better ones out there(probably!)

I’m loving the enchant effect myself, especially the elven bard who gives +2 spell, half their mana AND enchant! At the moment I am farming the stones for krystenax so I can build this enchanting team:
Woodland Banner:
Krystenax
Krystenax
Emerald Tear
Elven Bard

Sounds like a future must have mythic to me.

It could go on a legendary troop. It is only 2 mana per turn. To fill a troop with just 10 mana cost you would need 5 turns, or to put it this way> your opponent gets to play 5 turns.
Yes you also gain mana from gem matching, enchanting is just there to speed up the proces, but nothing game breaking

Before I tried it, I’d dismissed it as too slow also. But using a double Krys build I’ve changed my perspective. First turn purple gives both enchant, then I focus on filling my Dragon Soul or Gorgotha while both Krys fill up on their own.

Also, while it is only 2 mana per turn, it is also 2 mana per troop! If you have a “on 4+ match” mechanic, it isn’t unrealistic to assume you’ll have it on all 4 which means you’re getting 8 mana per turn even when you take a skull match. Or you can focus on mana denial to keep them from casting Bone Dragon while your team builds up. It also mitigates mana drain, if your troop is full and gets hit by manticore, on your next turn instead of needing 7 mana you only need 5.

Enchant as an effect feels okay, nice to have but not over-strong.

Krystenax’ trait seems a bit meh… maybe would be better if he had ‘gain +1 mana and Enchant on purple matches’, so it did something else after the first trigger… that said, Krystenax gets Stoneskin and a very strong spell, so…

I think it would be fair if enchanted troops gained 3 manas a turn. 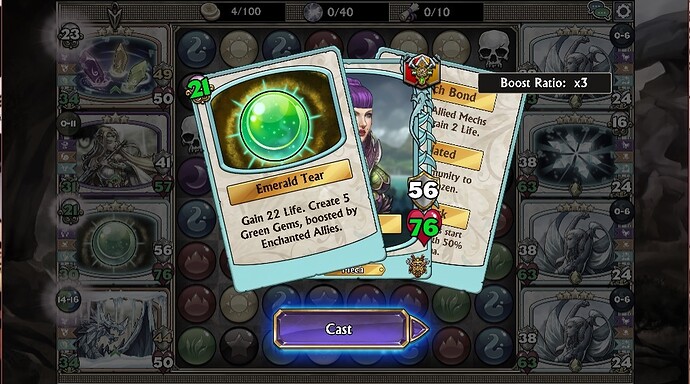 Get a purple match round one and it’s over quick