Lava's in the Air

@Saltypatra any reason the raid weapon is gone from the unowned list?

We are looking into the issue with the weapon now. Please bear with us.

It is now fixed! Please restart your game if you were affected.

I restarted the game and still do not have Flammifer in my inventory. Bought up to Tier V

The new troop might be bugged. I cast it too win but the game wouldn’t finish and I couldn’t move gems on the board I luckily had Sunbird to cast to finish 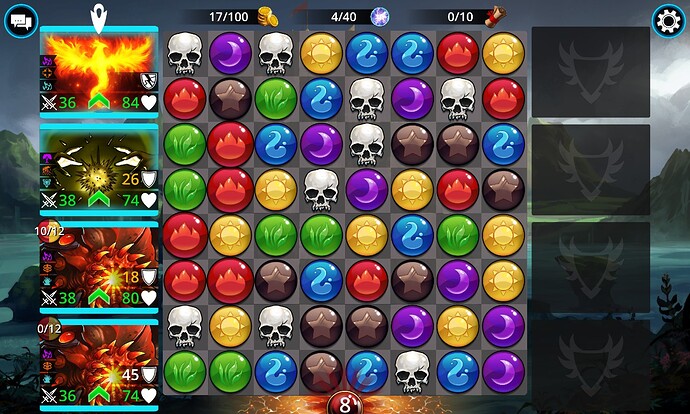 Please provide us with some more information so we can investigate this further.

I was in casual pvp and down to the last troop so I cast Pyggra and summon another Pyggra and also killed the last enemy but the match didn’t end the red 4 match was flashing but I couldn’t move any gems on the board I had to cast Sunbird to finish the match.

There is a bug with Krystenax where if you cast him and kill the last enemy while summoning and gaining an extra turn the same thing happens so it might be related to that bug.

Hey @Maxx thanks for the details, I tested straight away to see if it was the same issue as Krystenax and it doesn’t appear to be.

Were there any Doomskulls on the board when you cast Pyggra?
Which troop was the last enemy you killed?

Sorry @Kafka I have no idea I was grinding easy casual pvp and not really paying attention to what I was doing. If I’m in the situation again of being down to the last enemy with a full Pyggra I’ll take a screenshot before I cast him.

Same happened with me @Kafka last troop I killed was Suna. Not sure if any doomskulls were on the board when I cast Pyggra

Broken Spire is so brutal for the raid if you lack the mythic. Oh and, none of them have immunity to freeze either! (Fortress Gate excluded).

Use your hero! Sunspear, quite conveniently, can get the Insulated talent at Champion level 1 or 5 (forget which).

You don’t really need Infernus, as Raid is more about board control than looping explosion. Sheggra is a lot better.

Changed my mind about the bosskiller’s spell… actually it’s annoying - the forced board transform is unreliable and I find that, if I cast it when I need to kill the boss, it hands a good board straight to the AI… also this silly spell converts away the one colour that almost all other kingdom troops need to use…

After using Pyggra in main PvP team for extra gold, to reaching Tier 1, I found that Pyggra is much more powerful than I thought, almost at Fizzbang’s level.

After casting it, it’s almost garantee to be full again, with high change for extra turn if Firestorm is on. It paired quite well below Infernus, despite complete mana-block. They just keep filling each other, doing massive damage while keeping the turn. It even work better than 2x Infernus.

It’s low-chance summoning spell might be better than Infernal King’s third trait, in that one single Pyggra can spawn 4x team with enough luck from extra turn. We already have many good exploder like Ragnagord, but this is the first time we have a immortal one.

high change for extra turn if Firestorm is on

I wish that were my experience. My Pyggra is almost as much of a double-agent as Pharaoh Hound is (really, you stupid dog? 34 brown/red gems on the board and not a single match?). Still using it instead of Igneus because it generates mana instead of taking it away from me.

It’s mostly the cascade that cause extra turn. Explode+Storm is a deadly combo, especially the one that automatically focus on exploding gems from that storm, resulting in almost whole board explosion. I hope Pyggra doesn’t become a part of nasty PvP meta soon…

Jainus, I agree. Broken Spire got some tight synergies, but most of them are of the same color. Lava Elemental+Sheggra is good for skull-based build, and Fire Lizard+Pyggra is great for creating mass red extra turn. Obsidian Golem would be better for dealing with Ice Golem in Raid if not for the fact that it got an exactly the same color with Igenus. How could you get a team with decent mana flow if they keep blocking each other? T^T