What you were expecting to happen, and what actually happened:
I was trying to complete my GW battles. Upon entering the third fight, the loading screen took a long time. This usually happens when there is a connection hiccup, but it rights itself. Eventually, I was back at the menu, and no loss was recorded. I tried again, won the fight but then it appeared as though I had a loss as well.

How often does this happen? When did it begin happening?
This is the second time this happend during GW. It does not happen in any other type of game, and given the importance of GW battles is particularly damaging to the guild score.

Steps to make it happen again
It does not happen every time, so I do not know how to replicate it.

God I pray,
That you stop allowing updates during guild wars weeks to keep this from happening. The devs say they have no control over when the update comes out. Because I believe more in God than 505 knowing about the effect crashes like this cause to player moral and therefore their willingness to spend money in a “broken game”.

Is it actually related to the update?
Dunno how it works for others, but for me the game updates at launch, not during a random gvg match…
Neither does any update connection that’s related to challenges and general game map occur during a pvp/gvg match…

Is it actually related to the update?
Dunno how it works for others, but for me the game updates at launch, not during a random gvg match…

It might be related to one of the troops in the opponent defense team. I guess if you don’t have the update yet, starting the battle might somehow go out of sync, never completing the loading screen.

GW’s the only mode without an infinite money sink via potions.

“The publisher makes them” release during GW.

Put 2 and 2 together. It ain’t changing.

Can confirm members across all our guilds in our alliance and in several other guilds we interact with regularly are having these hanging issues when entering GW matches. Not sure what devices they’re on but trying to find out

Suggest people download all the ‘assets’. After the update, there was another 39 MB of downloads for me. Perhaps these are causing the hanging?

At the bottom of the graphics menu. 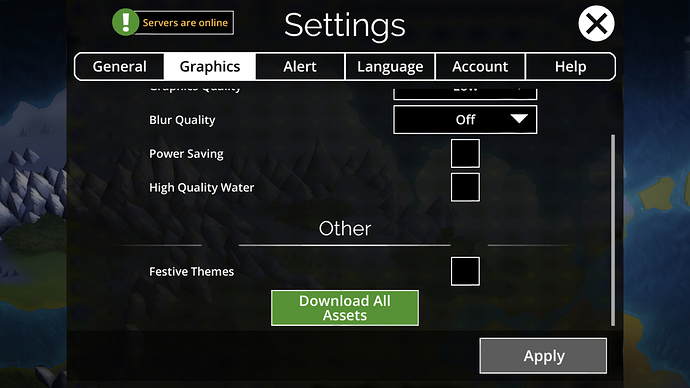 Thanks for the recommendation, Namour.

Unfortunately, I am still timing out. I downloaded the assets and then closed/reopened the game and still having time outs. All of my issues are in PVP.

Rebooting phone next, but this is clearly a server issue for 505.

But as the update downloads while logging in, you can’t possibly start a battle without having it already installed.
You can’t launch the app either without first updating from store.

I am experiencing the same bug. iOS platform.

In the past that just downloads all the images and usually doesn’t cause any sort of crashes.

You can’t launch the app either without first updating from store.

As far as I’m aware, this is only true if you’ve already logged in on an updated client. This is both from past Dev responses (although not sure if it applies to all patches) and personal experience.

For this patch, I played on my account without updating yesterday (Aus time) because I was feeling lazy, played in Steam later, which auto-updated, and then was unable to play when I tried to open the app on mobile later (until I updated).

for me the game updates at launch

the update downloads while logging in

This is true on Steam! Not for Android (as you later mention?).

Dunno how it works for others

This is true on Steam! Not for Android (as you later mention?).

And further small data downloads, when opening the parts of the game that got updated (like first time opening challenges).

That’s why I say that, as the update has 0 connection to gvg/pvp, it shouldn’t download anything during/before opening that particular game content.

In my Guild already lost 5 battles because of this. Why did you release an update in war week?? Why couldn’t wait for the next one?

I won first battle yesterday, then hung next battle until “Surely it isn’t loading, update?” Quit, playstore updated. Loss. Ugh. If you are continually logged in, you can access some stuff until the loaders BS meter trips out. It would be nice if it warned you BEFORE it rips you off.