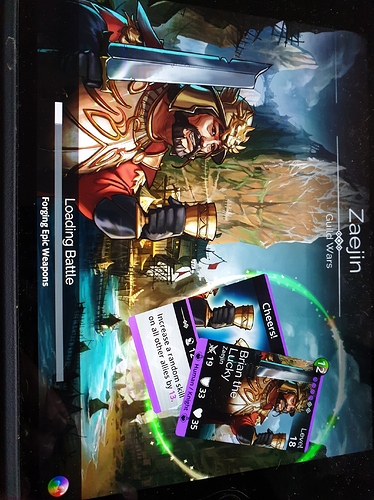 What you were expecting to happen, and what actually happened:
I was trying to start a Guild Wars battle, but Gems of War has not loaded the battle. Have been stuck on load screen for close to an hour. Afraid to close game down, as other guild members have experienced a similar problem and have logged back in to find a loss was awarded to them. For our Guild this week, it’s a tight battle, so every win is important and getting a loss as a result of an error does not impress me, especially since several other guild members have already been issued losses due to this very problem. Not impressed!

How often does this happen? When did it begin happening?
This has been a once off for me, but as mentioned, other guild members have experienced the same problem within the past 24 hours.

Steps to make it happen again
This problem appears to happen when entering a GW battle. Mostly it’s random. For me it was final GW battle for today. Other guild members experienced this on third or fourth battle.

Have you updated to 4.5?
(Not saying that’s the cause but those I’ve heard about thus far haven’t updated yet.)

I was not aware an update was required. No notification was given when I logged on this morning.

Yeah. Unfortunately.
The only way to hopefully remedy it is by closing the game. Going to your app store and checking for an update their. I don’t know if that will fix the issue, but I’ve only heard of the issue happening for those who haven’t updated yet.

And what will happen if I’m issued a loss for GW? That’s not very fair. I would be expecting compensation.

You’re not the only one.

Compensation is not worth it…
Some souls, gold is what you’ll get.
Results cannot be reversed unfortunately.

Have the Devs indicated a potential fix or compensation for those impacted by this? My concern is this fault is the result of not doing the update, yet I received no notification of an update needing to be done.

The good news is the next Wars 4.5 will already be out so nothing to worry about unless 4.6 drops.

I did my first attack, and waited over ten minutes for it to load second one. It would be nice to get a WARNING before choking a loss.