Regarding the “only the highest scores counted”, it’s straightforward enough to take that 800 per week and make it 133 per day. So you still have the guild-vs-guild competition over and done with each day, but there is still a bit of slack in the system on any given day.

Edit: by the way @efh313, this wasn’t my idea at first. Someone else suggested it further up the thread, but I couldn’t easily go back and locate that post. In the spirit of giving credit where it’s due.

You could also just make it where only the top 25 or 90% of scores are counted each day (or similar numbers). That would accommodate guilds with <30 members and guilds where people occasionally don’t participate.

If you make it so only the top 90% of scores are counted, then you’d have to compare the average battle score rather than the total across all players.

This percentage idea gives a relative boost to smaller guilds, which may go against the guiding principles of the Guild War update. The goal may be to get people into a smaller number of larger-size guilds, rather than a fragmented mess of 5- and 6-player groups.

There is no need of tickets…

Just put 6 buttons (black buttons on the picture) and each time you click a number is reduced by one and it launchs a fight. When it attains 0 you cannot do a fight against the corresponding guild. Players have all the week to click on it. 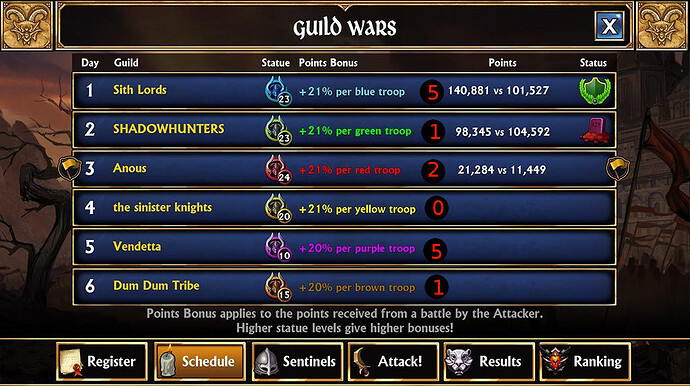 So, after tooling around with the system yesterday, we’ve found a way that works nicely where you can play the guild war battles at your leisure! I’ll go into nitty gritty details later, because we’ve got to rework some stuff here, so we’re going to be busy for the next 1-2 days as we don’t want to fall behind schedule on it.

There will still be a daily winner in any battle, but that is for bragging rights not rewards… if your guild is busy and can’t turn up, you might lose some battles, but you won’t lose out on any of the goodies at the end of the week.

Rewards will tally up at the end of the week, and as an added bonus, you should now get a very nice summary screen, available for a week after the war ends, showing you the final results & rewards.

Wow, now maybe the butt hurt will go away?

Edit: I am leaving it there but I think it came out a bit snarky. I meant the above comment as humorous and I hope people take it that way. There has been a lot of drama in this post thus far and I am hoping Sirrian’s last post puts it all to rest. 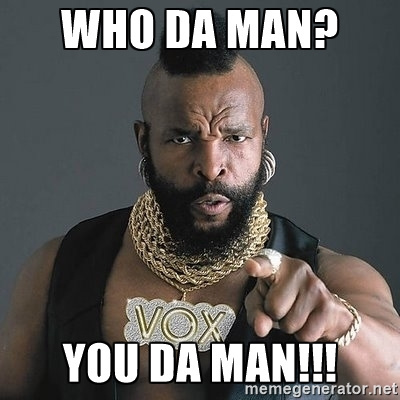 Edit: This is really for the whole dev team but “Who da team?” doesn’t quite have the same ring to it

Lol I’m glad you clarified as I didn’t read the humor in it by itself. As one of the chief butthurters on this issue, I agree.

Awesome news @Sirrian . Once again showing that the dev team really does listen. You guys continue to impress!

It seems that your answer is: don’t care about the daily battles, your rewards will not change.
But it’s not a question of rewards, it is about participation: some guild members could not be able to participate every day to guild wars because IRL events or they can just play on the week-end, for example.
The guild leaderboard is a good example: so much fights to attain the top ranks for… no rewards.

The guy said we will get more detail on in later, so wait for more details that will come later.

This is what he said:

, we’ve found a way that works nicely where you can play the guild war battles at your leisure!

It seems pretty obvious to me that people won’t have to play everyday since he said people can play “at their leaisure”.

…
If the devs opted for this path, let’s see how things turns out.

My interpretation is that now GW is broken into two sections, the:

Each day there will be a specific Daily Battle against a single opponent. All battles won that day (against that specific opponent, at a max of 5 battles per guild member) are tallied at the end of the day and whichever guild “won” will get bragging rights similar to the current trophy system. This is repeated each day for 6 days. Then, at the end of the week, all the Daily Battles (no matter what day they were done) will be tallied up to give us the winners of the Weekly War. Rewards will then be dolled out based on how a guild did in the Weekly War.

Does that answer your questions? (Again this is my interpretation, as @DonBoba pointed out, Sirrian will be providing additional details later).

Edit: Also, if you miss a day, you can still use your 5 battles to fight the guild you missed at any time during the week, but those battles won’t count towards the Daily Battle, just the Weekly War.

What I propose was to change the Daily Battles into Color Battles that you have the whole week to participate and the result is given at the end of the week. Of course, the 5 battles/member/Color Battle restriction can be kept.

Thank you for considering our feedback, this sounds great.

It does fix the problem because people only felt the “need or being forced” to play daily because you could lose rewards for your guild and self. If you didn’t want to let your guild down, you had to play every day. Now we no longer have to feel that.

This is looking awesome! Will there come a preview video about Guild Wars when the release is one week away or so? I love those.