With the update we should have the new Guild Guardians available. They are not, however, showing up in my unowned troop list.

Has anybody been able to obtain the new Guild Guardian troops yet? Are they available in guild chests? Was not going to spend my seals to test this.

The Switch version seems to believe that Dooms are unreleased troops still (unless this has been fixed recently), I wouldn’t be surprised if the same thing has happened with the new guardians.

For what its worth, on Xbox One, the new guild guardians didnt show up in unowned until the Monday of the new reset. (even though some people pulled it early in guild chests lol, before the devs fixed it so the new ggs didn’t)

We’re working on the guild guardians.

However, I would also make sure you exit the game from the switch home screen by highlighting Gems of War and pressing X on your joycon then re-open it to make sure you have the latest game data from the game server.

If that fixes it for you please let me know.

@Kafka I just closed and re-opened the game, but it’s looking like my theory was right. 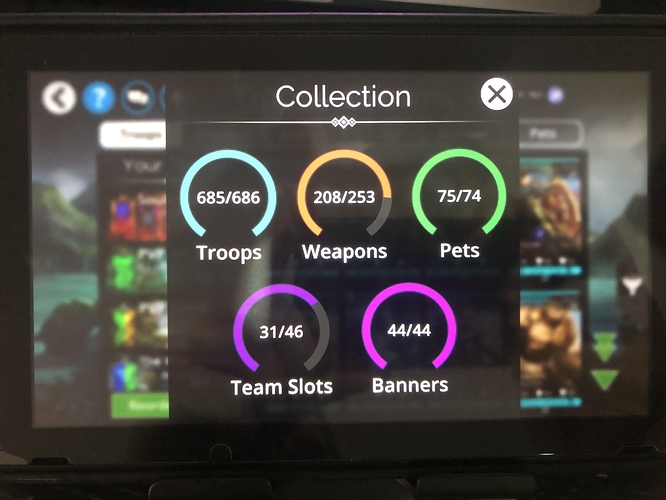 I apparently have 685/686 troops, but this is definitely wrong! I’m still missing 14 mythic troops, so this is off by 13! This is accounted for by the following troops that are not currently being counted as released:

These troops don’t appear using the Unowned filter because they are currently being treated as unreleased. This is the same reason some kingdom power levels are shown as being “Not achievable yet” even when they actually are achievable, specifically from the kingdoms that have Doom troops.

Edit: …so I don’t know how I missed this, but I also have 75/74 pets. This means there must be a similar issue occurring with pets, but I don’t know which ones. I currently have 0 pets showing as unowned, so the mistake might only be for a single pet.

After daily reset, this is fixed and the new Guardians are showing up in my unowned troops. Thanks for the prompt attention.

The Doom troops also seem to be correctly included in the count now! I believe it’s still off by 1, though. If my theory is right and it’s Shimmerscale, then this isn’t an issue because it’ll be added to the count once its proper release comes around. But a guildmate believes that the missing troop might be Mecha Gnome, since that was also added at a different time for Switch, but I have no way to check that right now. Is there anyone who doesn’t have Mecha Gnome who can check if it appears in their unowned troops?

Side note, pets are still showing as 75/74 for me, but I wouldn’t have a clue which pet is missing from the total number.

My theory on the pets is that it’s Lil’ Freedom. Every other holiday pet to my knowledge on Switch is one that the other platforms got last year, but we got the Eagle on July 4th, same as the others.

Thanks for confirming, then it looks like this problem should be correcting itself when Shimmerscale comes out in May.

If anyone wants to confirm what pet is missing… maybe we need a fresh account with no pets? Then just painstakingly go through each pet and work out which one isn’t there.

Hey you should have 76 total pets now, can you please check if the numbers look correct now?

Sorry I missed this, I hadn’t checked the thread again!

Actually, wait, something seems to be wrong with the troop count again? I have 696/702, which is again wrong by 7 (or probably 6). I could have sworn it was correct last time I looked!

I’ve reported this to the team - some pets/ possibly troops are being sneaky. It’s at least just a visual issue but I know it’s an annoying one for all our completionists!