Max troop and pet counts on Switch are (still) incorrect 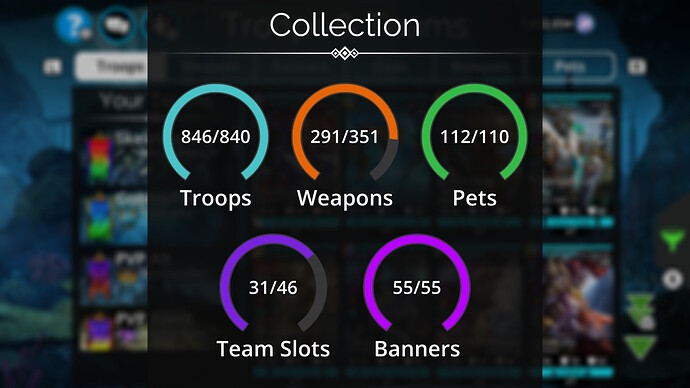 What you were expecting to happen, and what actually happened: Current troop and pet count should always be less than or equal to maximum troop and pet count, but with all troops and pets collected (or even just most of them), it is greater.

How often does this happen? When did it begin happening?
This has been a consistent issue for a year or more, and has in fact been reported before, but never addressed. To be clear, we know that the 6 unaccounted for troops are the Doom troops, as the game still considers these troops to be unreleased for some reason. This is known because the 6 kingdoms that have Doom troops regularly mistakenly display kingdom power tasks as “not achievable yet”, when they are in fact achievable, and it only happens with those kingdoms. I believe the Doom troops are also missing from the “unowned” search filter for players who don’t have them.

I don’t know what the 2 missing pets are, though they would be whichever 2 don’t appear under the unowned filter on a fresh account.

Interestingly I now believe the banner count is wrong as well, as I do not have the new banners available from warbands (Switch players have never even gotten the few warcoins that were given to players on other platforms), yet my banner count is 55/55.

Steps to make it happen again
Open up the troop screen and then collection stats, the numbers are wrong for all players.

Is this going to be fixed?