Faction 500 completed yet not credited 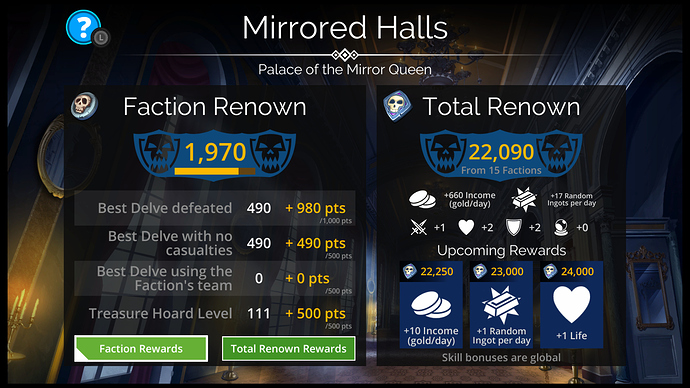 I was expecting to receive the credit of completion, corresponding renown, and achievement for completing a faction 500 delve. What happened is I didn’t.
I was working on the Mirrored Halls faction event using a pure faction team on level 500. This faction’s battles are insanely long. After a 30 min final battle to finally achieve victory, the victory screen popped up, followed by a notification that the event had ended. I’ve seen this screen many times before when pet battles expire. I understand that I should not receive any addition rewards that I would have received from completing the battle. However, I should be given credit in the delve for completing the battle.

I’ve never been in the situation to have this happen before.

Steps to make it happen again…naw I’m good. You do it. Go play that delve with a pure faction team at level 500 in the final hour of the event. I’m looking at the now now. I should still have another 30min. The event ended early for me.

To give you the ability to resolve the issue I won’t be touching the game until you fix it.

The event didn’t end early, looks like you fell prey to daylight saving time. I guess I see the technical reason for the pure faction win not getting credited, it still feels quite punishing.

Even if the OP forgot about daylight saving time, they aren’t arguing over leaderboard points. I also think they should have received Renown credit for clearing the delve.

I was able to upload a screenshot, however, I can’t figure out how to post the video. I’m not sure if that link will work.

I believe it doesn’t count as cleared until you claim the reward chest. If the event ends during the battle you don’t actually get the opportunity to do that.

Yeah. The delve level itself isn’t considered complete until you click the claim button under the chest after the final battle. I feel your frustration though. That’s not exactly fair.

You should be allowed to finish the battle you started. It’s not like you can start a battle before an event begins to have it end at the start.

So devs don’t check these anymore? It would have been nice to get an official response.

What typically happens is that this section of the forums lies fallow for a few days to a couple of weeks. Then, when Kafka has time budgeted to let her do it, she goes through and responds to the accumulated set of reports. Only the really high-profile stuff (like Mithran’s recent push to get chaos portal odds reported correctly) will get nearly immediate response—and that usually from Saltypatra, who is on the forums regularly.

If you’re looking for completion credit, you should also submit a ticket if you haven’t already.

I had forgotten to submit the ticket. Thank you for reminding me. It’s in now.