Did anyone do this? If yes, what was your hoard level, team, and strategy? I am pet blocked on Grosh-Nak and would like to get an idea how difficult this is.

I like to think I am somewhat good pure faction grinder but this one really turned out pretty darn tough! The boss room is just plain brutal, all things considered.

I did things a little bit differently: Hoard 259 (+50% from Kingdom Power); Squid/Shog/Squid/Shog as my team in that order.

It’s not easy, but it does have a straightforward “strategy”: Prioritize blue gems to fill your team and deny a mirror team mana, fire off Shoggorath as often as possible for the True Damage and because you’re hoping for Enraged to hit your tank to help your skull damage. If the other team’s tank isn’t Enraged, you can probably eat a couple of skull bashes if that lets you fill your own troops.

You don’t have the ability to target a particularly obnoxious enemy troop with extreme prejudice; as such, your concern is trying to win as quickly and brutally as possible as opposed to sniping something that agitates you.

I was trying this delve on and off (not every sigil every day) about five, six months ago; unfortunately, I do not remember anymore what the middle rooms were.
SStrategywise, listen to what @Kezef says. That’s about what I would advise, too. 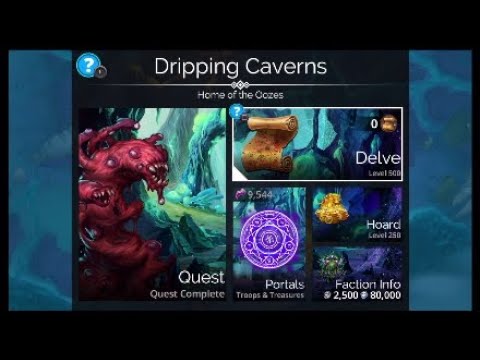 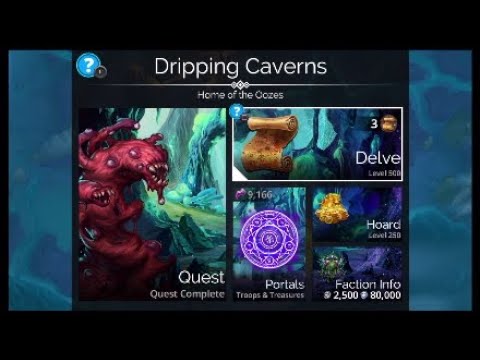 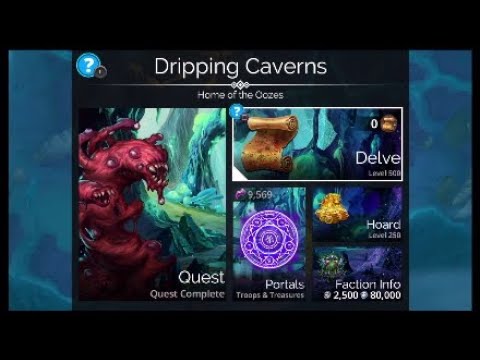 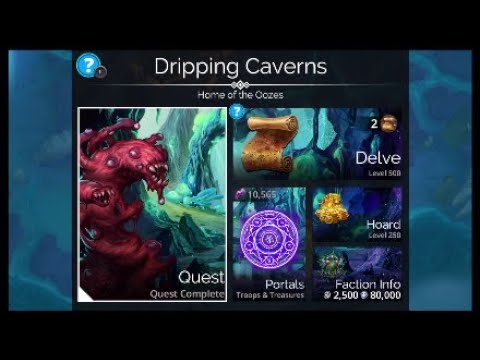 Okay, this is starting to get as brutal as others suggest.

So far, I already have 4 (I believe) failed attempts

Then, I bumped my hoard to 309 and tried once more with the above team, could not even make to the boss room. In my final attempt of the day, I changed the team to:
Rock Squid / Shoggorath x 3 (I will explain why)
But could not bring the whole team to the boss room either.

I will keep trying and updating but I will see if I get luckier. In the meanwhile, if you have any suggestions, please let me know!

Finally done with this, took another 3 attempts today.

Second attempt: I exchanged one of the Shoggorath with Jelly, hoping that randomness will help me. Well, guess what, second room and it was over already; it did not help (also did not get a good path either).

Third attempt: not the easiest path but not the worst either. Icy Coven and Mushroom Grove. In Icy Coven, watch out for the wolf since you won’t be able to silence it immediately. It will hunter mark Rock Squid, which might be tricky. I was super lucky because the enemy kept not getting skull matches for whatever reason. In Mushroom Grove, the only randomness comes from explosions, but that is not a huge deal if you can act fast and silence the first and the fourth troop before the party starts. Anyhow, finally made to the final room with the whole team and this time I was lucky with wish gem explosions, enemy Jelly cast, etc. and it finally happened.

Overall, definitely the worst faction on my list without potions so far. Never imagined that I would struggle a PF run this much where there is a true damage troop and with hoard level 309. I recently did Frostfire Keep with hoard level 309 as well and although it was also not a smooth sailing, it was nothing close to this one.

Additional suggestions for the other mad people in the future

Oh and the most important suggestion: wait for the right Tuesday and do this with potions

Good job. So I am not the only one who felt this is a nightmare. Wyrmrun on the other hand… that is just silly. I have made to the boss room so many times that I stopped counting, but I just can’t get lucky enough.

Thanks. Also, I cannot imagine what a RNG show Wyrmrun turned into with the actual traits. I did this with potions during the release when they had to roll back the traits so that it was a smooth sailing. Good luck to you!

Oh I have done it both with potions and potionless, back when the traits were the easy ones. I am just trying this with these current traits, as there isn’t much else interesting to do tbh.