I am planning to try out Dark Pits pure faction 500 without potions. Are there any others that already did this? If yes, what strategy did you use? What team and what hoard level?

There are three paths I believe, any suggestions on identifying the right path? 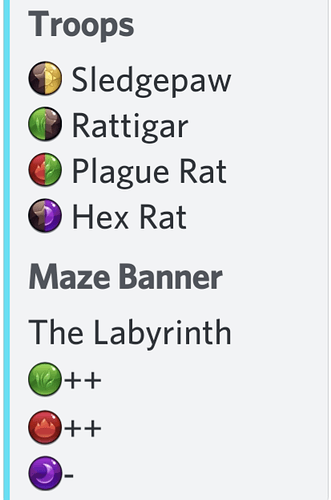 Thanks @kamosloki. Do you happen to remember how many tries it took?

Not really but certainly quite a few, this is a hard one. But you could get super lucky with the death marks and breeze through on your first go

That’s an expensive hoard, not looking forward to this

Continuing my strategy of avoidance.

@TimeKnight here is our professional no potion delver

I former guildmate of mine (@xolid99) did the same with Sledgepaw/2x Hex Rat/Plague Rat, if I’m not mistaken - I’ve been meaning to try this approach as well but never gotten around to it.

I did this one relatively recently. In fact, I actually knocked it out on my first delve attempt after the previous campaign artifact bonus went away!

My team: Sledgepaw to tank, two Hex Rats after him, Rattigar to bring up the rear. I chose to ignore the Plague Rat because I didn’t want to chance the explosions leaving a terrific board for the AI – especially the possibility to whack me with skulls a couple of times. (I place a higher value on board control than I do on the Plague Rat generating mana.)

Banner: +2 Brown/+1 Purple (don’t remember the minus). The idea being to fill the Hex Rats as quickly as possible.
Hoard: Somewhere around the 240-260 level; I can pull a number off my console later if that really matters. Kingdom Power Level 15, so 50% bonus on top of that.

(EDIT: Hoard 259. That seems to be one of my “lucky” numbers, although it’s expensive as hell to get Hoards that high.)

Pathing: There isn’t a single Tier V room I’d want to go through. There are very few Tier IV rooms I’d go through – Dragon Hatchery (with Dragon Soul, not Venbarak) and Coral Caverns are probably the only two I’d attempt. So most of my runs – including the successful one at the end – went counter-clockwise around the outside through the II - III - II - III route. Mildly dangerous on account of giving the AI a lot of chances to wreck your run, but easier because Tier II and Tier III rooms are manageable once your hoard gives you some level of statistical parity.

Strategy: Try and fill Sledgepaw and both Hex Rats at the same time. Use Sledgepaw to drop Curse and Stun on the lead unit, then plonk that lead unit with the Hex Rats. If casting the Rattigar drops Curse on an enemy, plonk it with a Hex Rat as well if possible.

Prioritize skulls when possible. If there isn’t a skull match, preference should be Brown - Purple - Yellow - Green. The last two can be reversed if you so desire; Rattigar is a useful unit albeit one with unpredictable targeting.

You don’t have healing other than Sledgepaw’s regeneration trait, so it’s a damage race. You do have to deal with status effects, especially in the mirror matches. At least one Medal of Orpheus is strongly suggested, at least in the 1st and final rooms.

Sledgepaw is handy for board control, although it can be a little unwieldy given how large the area of effect on his spell is. But your stars are probably the Hex Rats, especially when you use Sledgepaw to set them up. You let Sledgepaw tank because of his regeneration and his Armored trait; his ability to soak up some additional damage is much more valuable than using one of the other troops that inflicts Curse when dealing skull damage.

I think that covers everything that may come to mind. 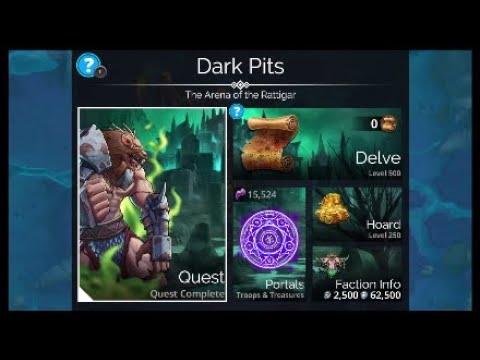 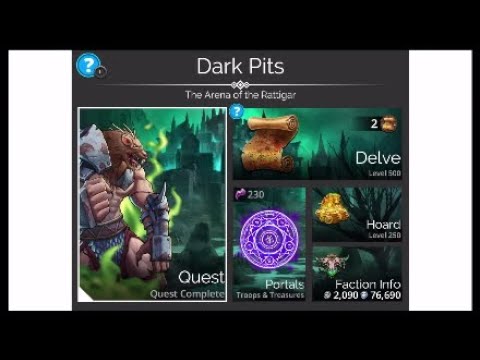 Dark Pits done, Hoard 160, 50% bonus, 2 Cedric, 1 Anu, no medals (don’t work). Sledgepaw 2 x Hex Rat Rattigar Basically tried Rattigar in top slot for the curse on skulls, but going round the outside paths, you’ve got to be really lucky it does not die to skulls, 2 hits it’s dead. Had it at Hoard 144 from ages back, had 3 goes after doing Amanithrax at weekend. So today, after a fail at 144, went with Silver Banner and restored Sledgepaw up top and raised to 155. Failed at boss miserably af…

See the link. Go round the left track but watch for True Damage. Key is 2 Hex Rats being full and casting them in successive turns on top of a curse. Hoard 160

Thanks everyone for all suggestions and discussion.

I managed to get this in my second attempt with hoard level 243.

First attempt I used: Sledgepaw / 2 x Hex Rat / Rattigar. I tried to go through the IV room with dragons, but they killed two of my troops (honestly I really hate dragons in PF 500 runs).

Second attempt: I replaced Rattigar with Plague Rat and went through V room directly (Liche’s Crypt). Managed to get to the boss room with complete team and the boss fight was bear-able (although lost two troops).

From what I hear here, I was super lucky, so I will take that one.

One more down, quite a few to go!