There should be a way to incorporate the souls from a Disenchanted Troops to roll back into your Soul Bank. This will allow the accumulation for other troops to increase i levels. Also, the ascension feature is not well balance. There are times when you’re facing troops with ridiculous levels and attack, there’s No way to compete with that when advancing through the game. The overall leveling of troops needs to be revisited.

Do… do you not already get the souls back?

I don’t see what he problem is. When you disenchant a troop, the souls that were used to level up the troop should be returned to you to use again (recycled). The souls have already been earned or purchased.

That would make sense if you were disenchanting the final copy of a troop, but otherwise, the levels you bought apply to all copies of the troop so there’s really nothing to refund — you still have those levels.

I’m not sure if it’s even still possible to disenchant your last copy of any given troop, but I would strongly recommend that you don’t — you’ll want to have all troops at Mythic eventually, and if you lose your last copy, you’re held back not only by ascension progression but also traiting.

When you disenchant a troop, the souls that were used to level up the troop should be returned to you to use again (recycled).

You are thinking refund (like for Ubastet this week), which resets the troop to the initial state and returns all souls/trait stones used. Disenchanting extra copies of a troop doesn’t lower the level of the remaining copies, so there aren’t any level based souls to return.

Disenchant is functioning as intended. I’d like to see the amounts boosted, but “the full soul cost of a leveled troop” would be ridiculous.

This was done because it’s expected that, especially for commons, you’ll ascend troops to mythic relatively quickly. As you open more chests, more and more of the troops you open are “extra”. But the amount of work you have to do to get that troop is NOT comparable to the amount of work it took to level the troop. I can open one gold key and get a common. But it took an hour or more of farming to level it to 20.

So it’s not fair to give you back disproportionately more souls than you spent getting the resource. At this point in my career, if I got back the “fully leveled souls cost” of a disenchanted troop, I’d be averaging something like 2,000 souls per gold key. That’s… ludicrous. Instead, I average something like 10 souls per gold key. That’s a little disappointing, but it does mean an extra troop is “worth” something.

On the other hand, I feel like the amount you get for legendaries/mythics is pretty flat. It costs a lot to get a mythic. It costs even more to have so many copies of a mythic you can disenchant them. I’d be a lot happier with 1,000 souls than 150 for those, but it should probably be even higher. I mean, how many people are routinely cashing in extra mythics?

I appreciate the candid feedback. This was just a passing thought for me, when ascending a troop seems to take forever, especially for the Ultra-Rare and up. When you’re in PVP and going up against higher leveled troops, the battles are so lop-sided. Price of admission I guess?

It gets a little better as you get stronger teams. Fully-mythic Goblins is only percentage points stronger than less-ascended Goblins. If you can beat one, you’ll beat the other almost as consistently.

But yeah this is the motivation to ascend your troops: to get to a point where other people can’t out-stat you.

When you’re in PVP and going up against higher leveled troops, the battles are so lop-sided.

Probably because you are facing players who have full kingdom and guild bonuses… not to mention pets. 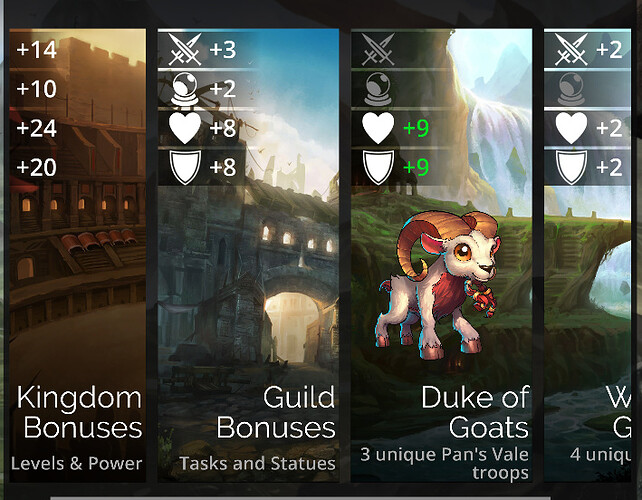 I’m saving my extra copies; 1) Because the paltry amount of souls you receive for even HUNDREDS of cards isn’t worth my time; 2) Because I’m hopeful that there will one day be another rarity (unlikely, but who knows.)

All but 4 copies of Mythic (base or ascended) cards are disenchanted.

You’re right, mass disenchanting will always leave 4 troops behind. As for higher rarity, the Devs have said that I won’t happened, and I fully agree, as I will cause huge outrage, especially people who disenchanted Base Mythic past 4 copies.

Personally, I still mass-disenchant my troops although I have no use for souls anymore, andI like to sort troop by amount. I recommend player to do that if they didn’t fully-level all troops yet, and still don’t have Dawnbringer/Xethanos. I usually get around 10K souls with monthly Mythic opening and 50K souls for new kingdom, so they do help reaching your goal faster.

Yeah, I figured there wouldn’t be another rarity. You’d probably pull one maybe once a year (if even), and I can only imagine how broken it would be.

Souls have a way of accumulating all by themselves, now as for a Nerfed card & refunds of said resources… I believe all players should receive the resources back AND the Card is LEFT ALONE - For the trouble of “Balancing” the game.

I hadn’t disenchanted today and got 57,000 souls. Definitely not worth my time.

I appreciate all the comment from my original post. There are some out there who agree that the amount of souls that it requires to level up a troop, the same amount should be returned from enchanting a troop. The trade off is not balanced.

Another thing, why are limits on our weapons, the power level should increase with the character.

There are some out there who agree that the amount of souls that it requires to level up a troop, the same amount should be returned from enchanting a troop. The trade off is not balanced.

The amount of souls for disenchanting could go up a bit but getting back all the souls you spent on a troop is incredibly broken. If it takes 5k souls to level a common I would get close to 5 million just from one of these troops 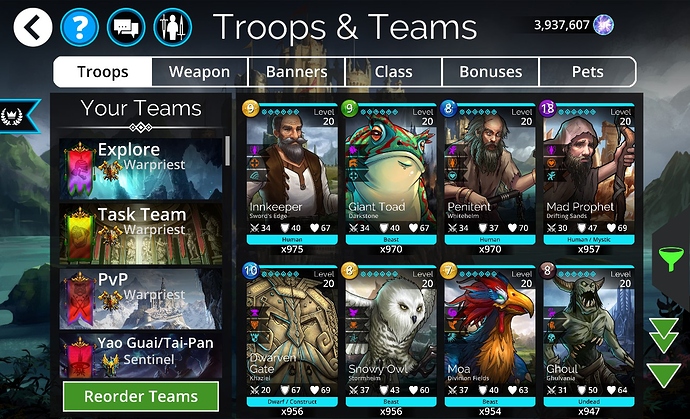 The troops you are disenchanting don’t lose you any souls at all. The extra copies all come from keys.

I spent 7800 souls to level my Infernus if I disenchanted my extra copy why should I get that amount back? How would that be balanced?