It’s odd for someone who’s never been in bracket 1 to post screen shots about someone dropping a bracket.
Not included in your little SS are the bugs that screwed up our score.
But hey what does the truth matter when you can internet meme it. And have douchebags hit the like button for it.

I’m fully aware I have my haters. But can anyone see how completey random shade like the one on this thread and wonder why I’m such an asshole to certain players?

Every single guild in bracket 1 has dropped to bracket 2 at some point. You won’t see a single post about it on this thread or any other about them.

If y’all want me to stop acting like I’m the center of the universe. Then perhaps you can stop treating me like I am.

And again… Only those who have actually been in bracket 1 have any grounds to talk shit of any sort.

Thank you in advance for the flag to this post. His post didn’t get flagged after 2 weeks despite it being completely a call out. But this will be flagged within a few hours for pointing out the bull shit.

Hi Ryan, my understanding of that post was the deliberate postponement of some battles just so the guild overtakes the previous one close to reset. Right in the nick of time. That’s how I saw it, for sure.

I agree it is not in good light if it actually had an ulterior motive.

Hi Ryan, my understanding of that post was the deliberate postponement of some battles just so the guild overtakes the previous one close to reset. Right in the nick of time. That’s how I saw it, for sure.

I agree it is not in good light if it actually had an ulterior motive.

If you had posted it. I’d agree.
Or if their was any type of time signatures in it. Sure.

But the poster has a history of talking shit to try and get my attention. And finally he succeeded because it’s not just shit thrown my way but also 29 others. Who all were equally screwed over by the bug. As other guilds before us had been screwed over as well.

The difference being the audacity to post such a low blow punk ass type post. When they haven’t even been good enough to have the opportunity to drop from bracket 1 to 2.

I’m not a celebrity. I don’t get paid for this shit. I’m a player just like anyone else. Yet because I can take it and stand up for myself just fine. Others feel it’s appropriate to talk random shit.

Ranked PvP persecutes me enough. I don’t need it here as well.

Cedric jackpot on the hard vault! 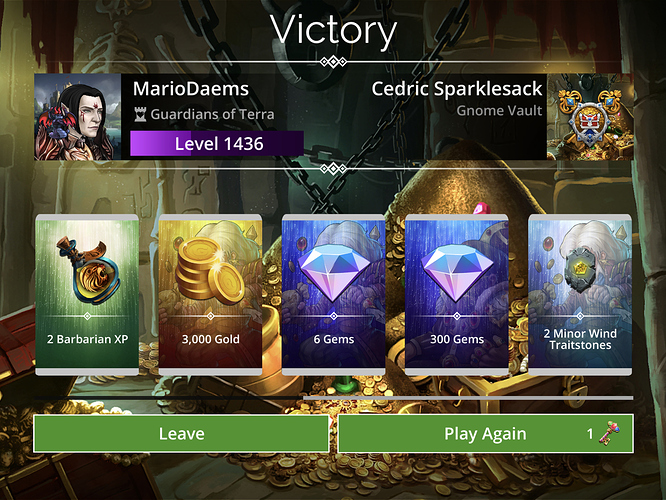 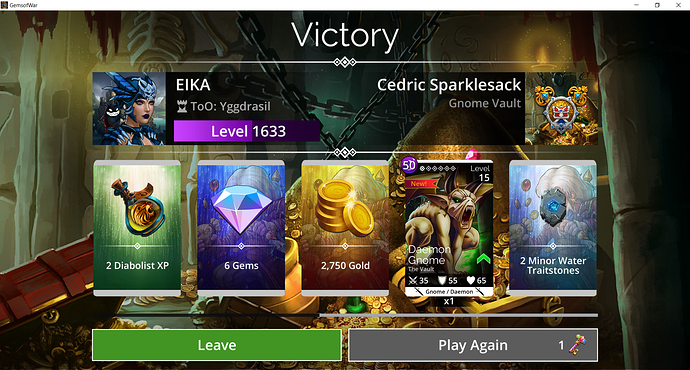 I finally got this little bastard the other night. 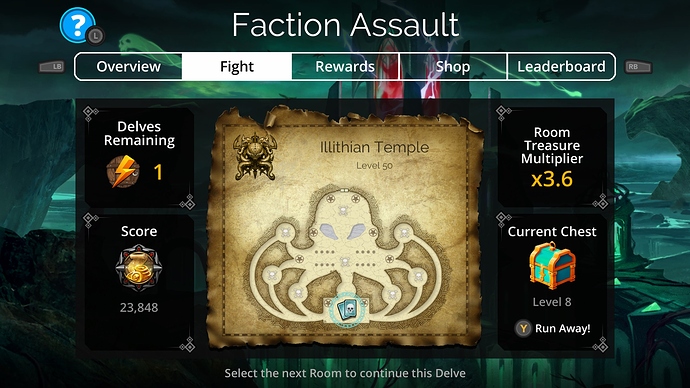 my highest damage in a fight so far

You must have him medaled. That extra Magic on him is op!

Opponent had to have had a Syc team?

Nah, would have had to be summons. I had a 4800~ damage stat show up once, ages ago… of course half the time we assume ‘wow I did a ton of damage with such and such’ and then it shows off how some random troop regened burn damage or something.

Probably against Infernal King. They “fixed” him, but he stills resurrects 5-6 times @25% rate…

Isn’t this just beautiful? Unfortunately I don’t have a troop that turns yellow to purple or purple to yellow on this team

And then to top it off, the blue at the bottom! 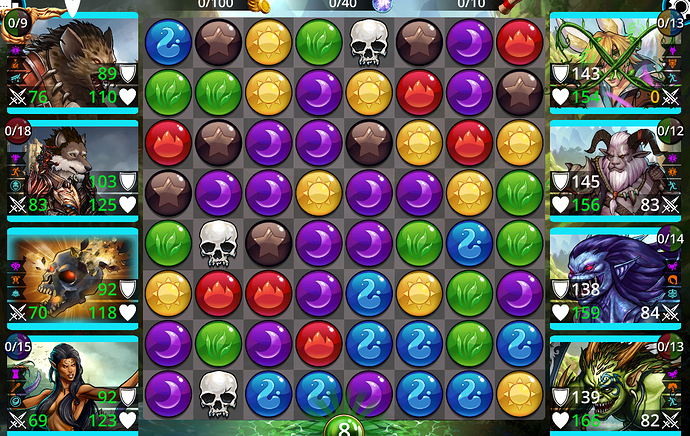 Did you go in with a skull team against 3 troops that are agile? @igniteice If I may ask, is this explore level 12?

I love the offense team though, to make it clear. I like etam builds that aren’t always meta.

lol, i fought L&D team with orbweaver
The spider keeps spawning and my 1st troop is entangled so it can’t kill L&D.
Sometimes there’s doomskull in the screen that gives L&D damage, and the cycle continues on… et voila!

Did you go in with a skull team against 3 troops that are agile? @igniteice If I may ask, is this explore level 12?

That team is for Explore level 12 in Pan’s Vale only, for leveling classes. Savage Hunter is the only troop in the game that has both Bloodlust (Become Enraged when enemy dies) AND Eagle Eye (Place Hunter’s Mark on enemies when doing Skull damage). It also does double Skull damage vs Green enemies with Toxic Hatred.

The Enrage allows it to ignore dodge/skull damage reduction. Fist of Zorn is for increases its attack and getting some quick skull matches if possible. Scylla creates Bonestorm for it.

Most enemy teams consist of 2-3 green troops. However, a common frontline enemy troop is Sileni Guard, which is very annoying because he gives all Wildfolk Barrier and he isn’t green.

Lapina Explorer and Trickster can be annoying too if they knockback Savage Hunter. Otherwise, it can be a very, very fast team.

Skull damage is a bad idea against LD teams. You want some form of spell damage that lets you passively target that troop, since it’s stealthy.

The Enrage allows it to ignore dodge

I could be wrong, but I think Agile procs before Enrage is taken into consideration, which I’ve always considered to be a bit iffy.

I could be wrong, but I think Agile procs before Enrage is taken into consideration, which I’ve always considered to be a bit iffy.

Hrm… I’ll test it out for a bit here and see if I can get one of them to dodge me when I hit with Enrage on.

I’d love to know for sure/have confirmation, so thank you

especially if it were considered an undesired interaction.