Congratulations to the dev team on the 4.9 update!

I offer my congratulations on this update. Offering new shop items and packs could have been great. Rewarded ads could have been awesome. I am astonished how you took something that so many mobile f2p games do well and completely shit the bed.

I played another game (actual game title withheld for fear of being flagged) where over the course of 18 months I spent $26,000. Why? Because the items and packs available were worth the money and I was appropriately powerful based on the price tag. This game? Nope. Nothing worth spending any money on. I mean seriously, its laughable to see what the dev team thinks the value of resources are in this game. And to once again have it predominantly ruled by the same idiotic RNG algorithm is a complete joke.

Rewarded ads are such a simple thing to do right. At least that’s what I thought until this update. I swear I read somewhere that the 30 second ad was supposed to compensate about what a player would earn in 30 seconds of play. Turns out this is not at all the case.

First of all, one every 8 hours? Really? Is that what you are resorting to to get people to log in regularly? But nevermind that.

The rewards given are NOT worth 30 seconds of play time. I got 100 souls lol. I have millions of souls that I have absolutely no use for. But wait! I could get a good reward on the next one! Really? RNG again? You have got to be kidding me! This is the same RNG that gives orbs of growth and wisdom (both useless) 95% or higher. I have gone 6 weeks without seeing anything but orange or green. Other games allow a set amount of rewarded ads per day. If its 3, fine. But let them be all done at once. And for a fixed reward for God’s sake. Enough with this RNG for everything.

People are leaving this game in droves! I have had 6 people quit from my guild in the past 3 weeks and 2 more just since 4.9. They are leaving because it is abundantly clear the the devs have completely lost touch with their player base and what a f2p game should be.

Now that I have said what I needed to say, I will go back to lurking and I await the flags that I’m sure will soon follow this post.

100 gold for a 30 second ad is insulting. We were told itd be equivalent to 30 seconds of gameplay. In whose mind is this acceptable?

This is the same RNG that gives orbs of growth and wisdom (both useless) 95% or higher. I have gone 6 weeks without seeing anything but orange or green.

Orbs of wisdom are awesome. Instead of grinding explores for 1 month in order to trait 5 mythics I simply used orbs of wisdom on them.

I played another game (actual game title withheld for fear of being flagged) where over the course of 18 months I spent $26,000

Did you notice the weekly offer of 10 keys is gone? Why is that? To force people to use money to get keys? Were those 10 keys that we paid for with game currency killing the Devs in some way? We went from unlimited buys, to 10 a week, to nothing? Please, fix this.

It’s not gone, it’s moved. Or at least, that was the intention as per the patch preview a week ago.

I can’t see it anywhere, but I assume that’s because I already bought the 10 for the week. 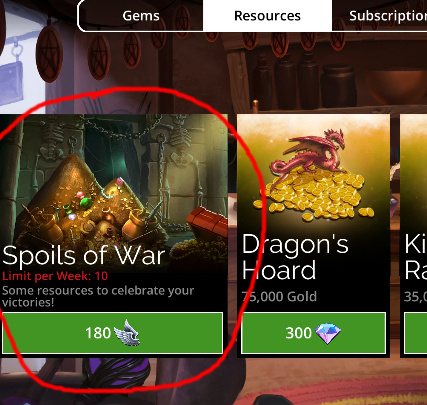 I played another game (actual game title withheld for fear of being flagged) where over the course of 18 months I spent $26,000.

Says who? Its disposable income so what’s the problem?

I played another game (actual game title withheld for fear of being flagged) where over the course of 18 months I spent $26,000.

That actually sounds about right for some space MMO when you buy the biggest ship and the best modules for it. Or 1-3 of those ships.

It is actually a space MMO lol

How someone spends their discretionary income is none of anyone else’s business. Every single person spends money in ways other people would consider “not healthy”.

Their money, their business.

Signed, someone who would never spend $26k on a F2P game but fully supports someone else’s choice to do so.

(Obligatory disclaimer: I do not support games that prey on folks with addiction issues in order to make a buck. But cases where someone’s choosing to spend? It’s their money and they should enjoy it how they see fit.)

I just cannot get over this line…
Even if it was a different game, such a spending habit makes you part of the problem. A reason, why “free” cash grabs are replacing real games.

Let’s say, an actual full release game keeps you hooked for a month while remaining entertaining and not turning into grind. How much would you be willing to spend to buy one at most? 25 Dollars two years after release? 60 on launch day? Maybe 80 for a collectors edition with some feelies?
Would you ever consider spending 1500$ to buy a computer game?

And yet dropping that amount onto a “free” game each month feels different for some reason? I bet, it wasn’t even as much fun to play as a real game, and paying only made it less “un-fun”.

such a spending habit makes you part of the problem

Part of the problem? What problem? It’s my money to spend as I see fit. I didnt take food out of anyone’s mouth. I didnt lose the house. My lights are all still on. Google “disposable income”.

People are totally missing the point of my post. Forget about what I spent on another game and focus on why I will never spend that much on this game.

It’s supposed to be in the resources tab I think.
I don’t see it but maybe it disappears for the week after you buy it.

I played another game (actual game title withheld for fear of being flagged) where over the course of 18 months I spent $26,000. Why? Because the items and packs available were worth the money and I was appropriately powerful based on the price tag. This game? Nope. Nothing worth spending any money on.

Yeah, there is a reason why after almost 4 years, I still spend money on Pokemon Go (about $1,500 total) and why I haven’t bought anything with my own money, in this game, in over a year.

Hell, there even a reason why I spent almost $500 in OverWatch over this last year and a half since I started playing. And that’s even a loot box based system, ffs!

But, the difference is, with both of my examples is I never felt pressured to spend money and I enjoy the game, even without doing so. And, even though OW has loot boxes, there odds are pretty fair (way more fair than GoWs damn chest system).

And, while Pokemon Go has actually done things to improve their experience for players (and even OW moved away from their first Loot Box system, due to how poorly received it was), GoW has done the exact opposite.

Honestly, man, before the gem sinks came in (like Raids and Invasion), I used to tell people about this game. Because, for the most part, I felt the monetization was decent. Yes, there were still over priced deals and such, but I never felt like I had anything shoved down my throat. Now, though? It gets worse and worse with every update. And, you feel like you either have to spend tons of money just to “keep up” or severely cut back on your expectations and spend most of your time grinding just to feel in an “okay” spot.

I chose more of the latter option. Now, I just end up ignoring or barely playing most of the new stuff. I just grab my weekly troop, whatever new weapon is for this week and say screw it. Trying to invest in all these different events, and trying to get everything trained/leveled up, is just to much now. You either have to play this game like a full time job, just to keep up, or throw obscene amounts of money at it.

Honestly, I miss the old days. The days right before the Sigil additions. Where this game was more about collecting and maxing out troops, instead of grinding on half a dozen copy-paste events a week.

Yeah, there have been some newer thing I like. I like how we’re getting new classes, and you don’t have to pay to change them all the time, and other things like that. But, outside of that, I feel the whole landscape of this game has changed for the worse. It’s less a game and more a “feed me money” machine.

You’re thinking about it all wrong. The gem costs and $$ costs on everything are intentionally made awful so you have no impulse in buying them. So it’s actually a humanitarian gesture on their part.

If someone who was actually good at pricing/marketing made this stuff, then you’d be impulse buying on a whim non-stop until you were selling your family to some shady guy in a brown coat just to get “5 more event keys man, it’s only 5 gems!”

Remember, this is a company that thinks slapping “$100 dollar value for $20 bucks, much wow!” on everything is a brilliant marketing strategy…ooooooorrr they realize how dumb that sounds and do it on purpose to alert us. Warning: Stay away!

So really they’re doing us a favor. By making everything so laughably bad, only 14 year old children of millionaires are buying anything. Those of us who have to like, pay bills and work for a living are never compelled to buy anything.

I needed a good laugh and this thread succeeded. TY

I just cannot get over this line…
Even if it was a different game, such a spending habit makes you part of the problem. A reason, why “free” cash grabs are replacing real games.

These ads are awesome! Not only am I 100 gold richer, it introduced me to a great new skin cream that I’m sure will be perfect for the upcoming non-existent pool season! Win win!

In all seriousness though these rewards are mostly terrible. However it reminds me to be thankful that this game doesn’t have an energy system you can refill by watching ads or paying premium currency.