What you were expecting to happen, and what actually happened?
I had a team of Crimson Bat (fully traited), Wolf Knight, and Death (fully traited). Against un-buffed opponents, I can get earn bonus damage immediately on turn one either by hitting them with skulls, or making a match-5 with brown and casting Wolf Knight’s ability.

However, what actually happens (very often!) is that death’s ability will ‘wound’ the enemy (during my player’s animation) and then the opponent will get some sort of buff to their life. (Either receive x to all stats if in first position, or plus life for blah blah blah reasons…)

My expectation is that the enemy would still count as ‘wounded’ despite those buffs. They do in fact start with a total calculated life total that is 2 less than expected as Death’s Aspect of Death did hit them.

Line up my team against a Luther with the ‘Leader’ trait or a Sir Gwayne with the ‘General’ trait on the AI side. Attack with Crimson Bat or activate Wolf Knight on the first turn. 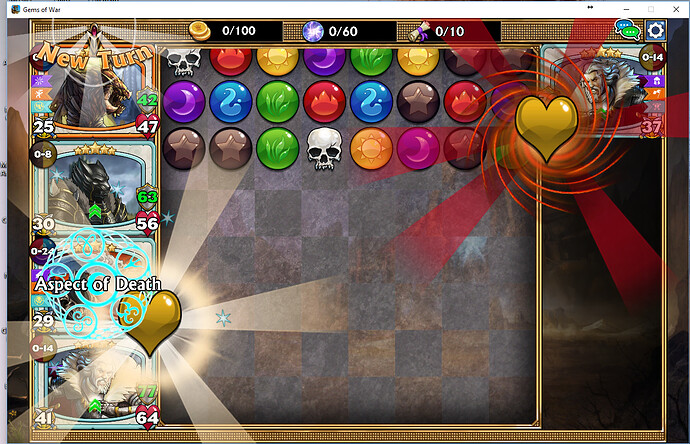 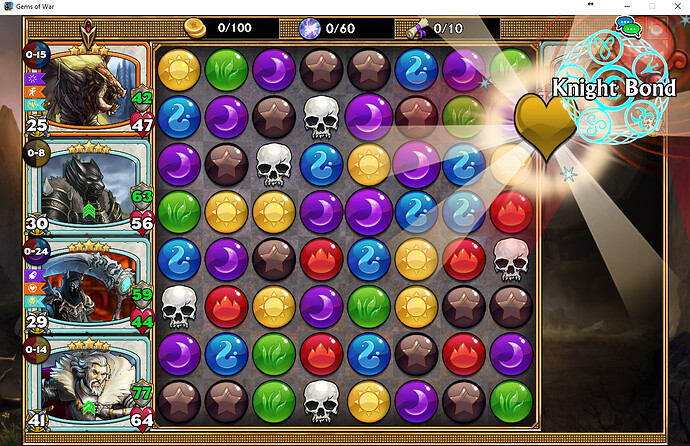 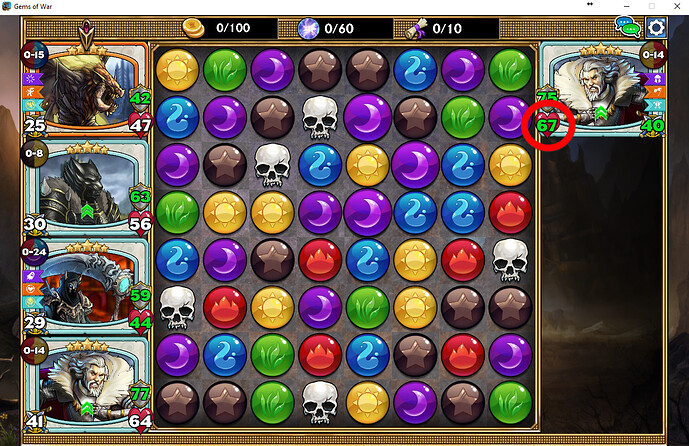 Here’s a different game against the same opponent where I attacked turn one. He had the damage reduction trait, but the math says my damage should have been 35-40 instead of 18 once he is marked as ‘wounded’. 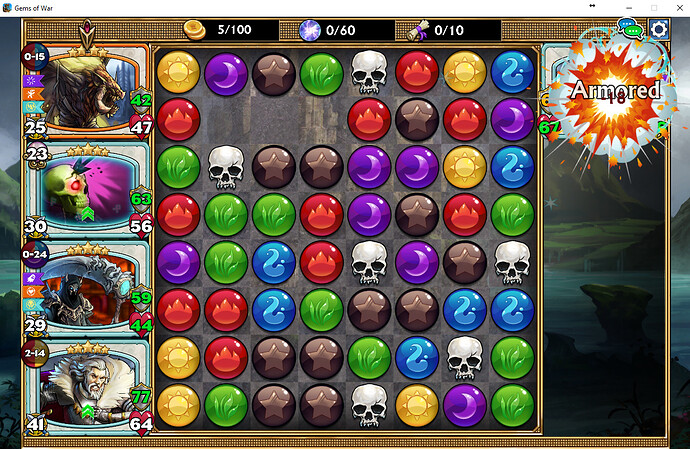 I’ve seen enough odd “Wounded” vs not that I don’t rely on Crimson Bat’s Skull damage any more.

I wish I could pin down all the things that change if a troop is wounded. I’ve cat CB’s ability, and still had the enemy not be considered wounded.

I wanted to try and figure it out, and write a ticket, but I gave up, and just treat the bat as a spell damage troop.

This is a “feature” of the order that traits are applied (ie your team’s first, then the enemy’s).

Technically if all traits occurred at once, it still wouldn’t trigger Bloodsucking, as Knight’s Bond and Aspect of Death are both 2 points (ie they would cancel each other out).

The Wounded status is a little odd. There are three stages of HP: Buffed, Normal and Wounded. Represented by the colours Green, White, and Orange respectively. If the number if Orange, then Bat’s trait should trigger. This means that any buffs to health, be it Team bonuses, Bond traits or certain healing spells (some spells only heal up to your max, some will buff it beyond) will provide a buffer to when the troop is “wounded” meaning you need to remove all the extra health first, (at which point the number will be white if you get it exactly on the troops max health) and then deal damage to change it to orange, at which point it will be considered wounded.

I’m still waking up a bit, so apologies if the explanation isn’t overly clear.
TL;DR Unless the HP number is orange, the troop isn’t considered “wounded”.

TL;DR Unless the HP number is orange, the troop isn’t considered “wounded”.

(Un)fortunately no, unless it changed in maybe last month or 2. Fortunately if a troop has his life damaged (e.g. True Damage) and then buffed by, say, Mercy - he’s still considered wounded, even if his life is in green. Only healed to full (like in Emperina’s case - she also buffs, but the healing part is important here) aren’t so. Unfortunately it makes the colour of HP number mostly irrelevant.
It worked that way since as long as I remember, so what the OP describes is a bug - or things changed very recently.

EDIT: Never mind… after doing some more testing the Gain spells DO increase max HP as well. So unless the Bond traits are different in that they don’t if you’re below max HP, (making things very confusing) then yes I agree this is a bug.

I think the confusion might actually lie with the terms used and different terms doing different things despite sounding the same. (Though I do agree with you that as a result of all this the colours are meaningless)

Gain (All bond traits, and some troops such as Bunni’Nog, Anointed One etc) appears to increase current HP regardless of the maximum. So 20/20 would become 22/22. I’m not 100% sure if it does affect the maximum or just would cause it to be something like 22/20, but my assumption is that it would increase the maximum if the current value is equal to the maximum, so 1 point of true damage afterwards would cause the troop to be “wounded”. However it does require a bit more testing. Since Gain only acts on current HP (barring the case that HP is full), if a troop is a 18/20 it will only put the troop to 20/20.

Restore and Health both appear to be your standard “heal” meaning healing you up to your max and no more.

Assuming all this, my assumption is that, in the OP, Sir Gwayne starts a 67 HP, loses 2 to Aspect of Death, bringing him down to 65/67, and then Gains 2 HP from Knight Bond bringing him back up to 67/67 ie full HP and therefore not wounded. I’d be interested in seeing what the HP for Sir Gwayne was before Aspect of Death hit to confirm. But if we assume that Gain doesn’t increase max hp unless at full hp, then it would explain the behaviour seen by the OP.

It would however, raise the debate about which order traits should be firing in.