In today’s guild wars fights I was seeing a Crimson Bat with 38 attack deal 76 and 112 damage off single skull matches. Presumably the 112 was 152 but my lead troop didn’t have enough health to show it all.

I have also managed to get a screenshot, of my Draakulis taking 57 damage (382.75 for armored) with way more than his starting life. 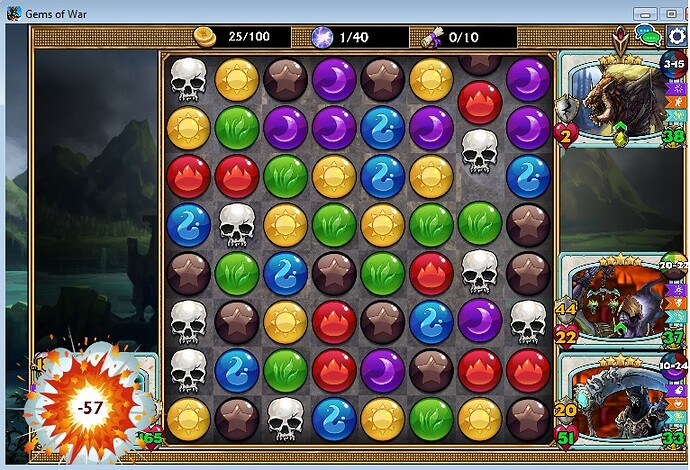 Your top troop will always be wounded as Death will have triggered on it. Wounded is not the same as your health not showing green anymore, unfortunately.
About the Khorvash, I dont know what happened there.

I realized that about the Drakon after I had finished typing it up, which as you say is one part solved.

Also if ‘wounded’ is described as ‘has taken health damage, ever’ they should be a lot more clear on that. Even if like mana burn it’s a term used on exactly two cards.

Wounded keyword is quite buggy. For example in PvE matches with higher than normal difficulty, wounded doesn’t trigger right away.
Example: Some guy has 20 hp. In normal mode, taking 1 damage is considered ‘wounded’.
If you increase difficulty and he now has 24 damage, taking 1-2 damage will not make him ‘wounded’, even though the health icon is red. Might be, that he has to go down to 19 hp, to be wounded. I haven’t played around with that for a long time, but using a Wolf Knight used to be a pain.

I believe that as long as a troop has taken a single point of damage off his starting life, he is considered wounded. That’s why the Death and Crimson Bat combo is so effective.