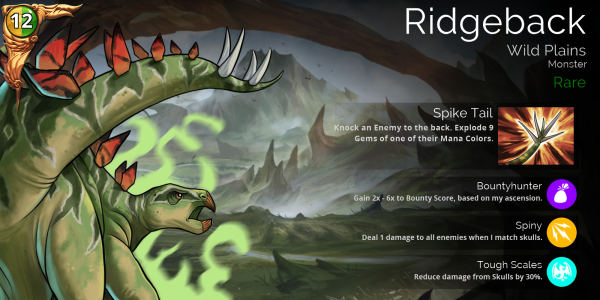 The Ridgeback from the Wild Plains is this weekend’s Bounty Captain.

The Ridgeback will be available in the Bounty Shop, and will appear in Glory, Gem, Guild chests in 3-4 weeks’ time.

Troop itself is nice i guess (help filling stuff, the thing that made bounty so boring to start with), sadly enemy troops are among the lamest ever, half of them entangle (and are immune to entangle themself making trrops like manatarms and urska druid useless) and, with the exception of rowanne, got tons of hp and low armor, making tigraki warrior doing lame damage.

Guess bounty keep sitting on the throne of most boring event in gow (even gw seem fun compared to it ;p).

Ofc that using bounty troops only, once i get bored enough and swap to hero (before getting to lvl 20 for sure lol) will be another matter.

I actually like bounty events much more than all the other events, and probably the only event im looking forward. This one isnt half bad, a bit more challenging than last one, so not that easy. Glad they didnt put rowanne on the last level, quite an annying troop.

Can anyone recommend me the best bounty team? I have all bounty hunters. Thanks!

works good till about stage 10. Starting to struggle a little

Im doing ok at 20. I try to target most deadly troops first, and not cast all my troops. Most damage is done with tigraki and corpse mare. If more defense, i switch rift lynx with man at arms.

Use gold keys to get all previous bounty troops to mythic. Gem up the Ridgeback to Legend. Team: Ridgeback, Man-at-Arms, Rift Lynx, Uhhhh? (The Red/Yellow cat lady from pride lands LOL)… don’t remember banner but, it was minus purple for sure… get to level 16 and run out your sigils there for a guaranteed final (lvl 20) reward.

Use ?Cat Lady? to hit guys with higher attack, ManatArms to barrier ridgeback and boost attack, use Ridgeback to generate mana and skull hit…if a raven shows up, spam it with cat lady

I haven’t given it too much thought, but – is it ever profitable to use extra Sigils for Epic+ battles in Bounty? The only situation in which I can imagine it would be is if a player is struggling to beat the very first stage.