All level 10 kingdoms, now what?

I have my kingdoms all at level 10. Now, I am trying to determine the best options for advancing. I am considering the following options:

Currently, most of my units are gold or purple. Most of my earnings are being invested in my guild, hoping to upgrade my units. I have been storing souls until I decide on a course of action.

Any more experienced players have a recommendation on advancing in the game from this position?

id start by 5staring the 4 magic kingdoms for double bonuses

Well I would say it depends on if he’s console or PC. Slightly different plans based on available troops per kingdom.

And besides, you can’t 5* all the magic kingdoms. Blighted Lands only has 7 troops.

Thanks for the quick answers.

Clarifying, I am on the PC.

Ho sorry don’t listen to me then im on console

Aside from the Whitehelm suggestion, I would work on 3* Whitehelm, Pan’s Vale, Wild Plains, and Divinion Fields. Those kingdoms offer the most glory and the 3* will double the chance they give glory.

If you were to 5* a magic kingdom, Zhul’Kari and Karakoth are the 2 to look at. They both have 9 troops so assuming you have all 9, you’d need less traits to max them out and have an easier time doing so.

Likewise for any kingdom, those with 10 troops, if you have all 10 are easier still. Ghulvania and Mist of Scales both have 10 now. I 5* Ghulvania and I don’t have any other kingdom currently above 1*.

Traitstones should come on their own while you get the souls needed to level the troops.

Those should be some decent steps to try from here. Good luck.

IMO work on one staring everything the three star while getting the magic kingdoms if you can. It is way to much to get darkstone up to 5…but fairly easy to get Zul’Kari. Resources come with time and tributes are one of the greatest sources. However if you are lacking a lot of mythic troops even three stars can be pricey.

Get one first and make your tributes more valuable. But again that is just my play style.

yea i find that zhulkari as home at 5* will give decent souls/glory, while still giving another magic bonus

Plan out everything that you can. If you don’t have enough to get the star you want, don’t bother committing - remember, there are new troops every week, and the more there are in a kingdom, the less resources you have to commit to get those stars. Going for stuff “early” will just end up costing you more resources in the long run. Additionally, the more low rarity (UR or below, preferably), the easier that kingdom will be to get stars on, especially if you have to start throwing down traits to get stars.

The kingdom list found here is very useful for finding out your best tribute options: 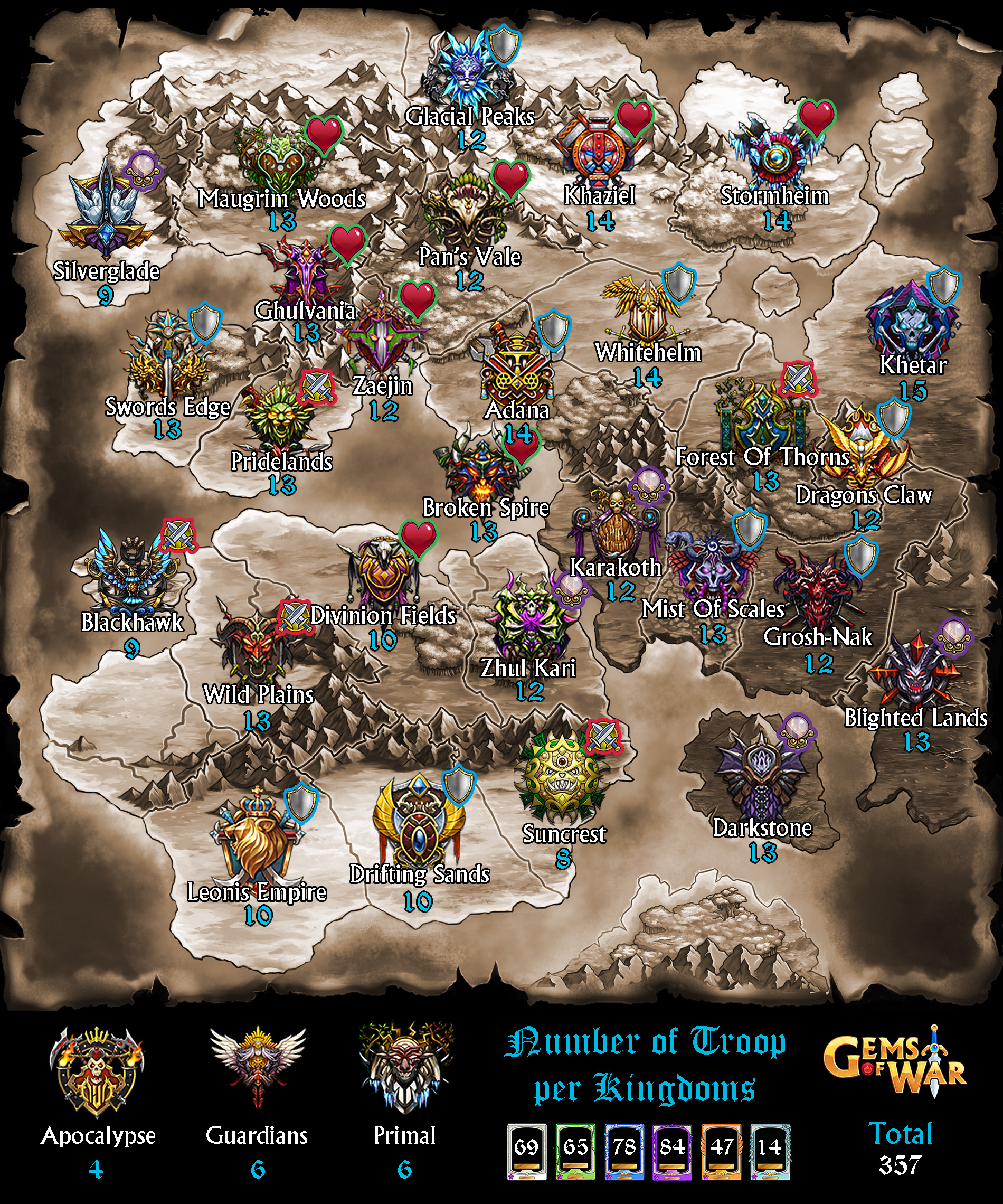 There are currently 28 accessible kingdoms in the game which can be unlocked. There are also 3 kingdoms that are not present on the main map, and are only available as units. Each accessible kingdom provides: Banner, Challenges, Quests, Troops. Some...

Starting at gold stars, you’ll probably want to consider glory first, then souls, then gold. Gold stars shouldn’t be cost prohibitive yet, but if you are missing some troops in a kingdom still, you might want to focus on another one first. Start with high glory, 9+ troop kingdoms, and just move down the list. Level troops that you aren’t going to use as little as possible (by cost, starting with commons) to minimize the resource commitment as higher levels cost much more souls. Try not to commit any runics or arcanes at all, if possible, for just kingdom stars unless you have exhausted other options.

If you can collect frequently, you probably want as many 3*'s as possible to maximize your gem and gold key income. Start with one high glory kingdom (Whitehelm, Pans Vale, Wild Plains) as your home kingdom, then try to get that to 3* as cheaply as possible. From there, you’ll either want to move onto the kingdoms where you have the most troops unlocked (Khetar, Ghulvania, and Mist of Scales all have 10 available) to maximize keys and gems over time, or higher glory for slightly more cost (the previously mentioned glory kingdoms, then the 9 troop kingdoms with decent glory including Swords Edge, Pridelands, Drifting Sands, and Zhul’Kari).

It may be worth kicking Zhul’Kari and Karakoth (and possibly Pridelands) all the way to 5* while still working on your other 3*'s if you have the extra resources. If you have a ton of souls and just some minor/major traitstones, the 10 troop kingdoms are basically gimmies to get to 5*, so you can pick up those stat points on the cheap (a couple armor and a life) if you want as well, but in my experience, more 3*'s will help more in the long run. I will note that neither of the 5* magic kingdoms that I got had any measurable effect on my PvP or challenge farming speed (except for Tacet’s one-shot “Minon Raid” method, which I decided was not for me anyway) , and that my “fun” teams were the ones that generally got more of a bump.

Keep in mind that even using traitstones to fill the gap, just leveling to get a single kingdom to 3* is likely going to cost between 20k and 30k souls, with levels 15-20 being especially pricey. Once I started working on 3* kingdoms, though, I found tributes to be a MUCH higher percentage of my weekly glory than it was for souls or gold.

Break out that Valk, you are going to need her.

Thank you all for the good insight.