I only need courage but the last 2 weeks i opened over 100 chest and got 0 courage. @Nimhain

I just opened 50 chests and got 5 Courage (which is the last one I need too).

So I think you’re just really, really unlucky. Best of luck with the next batch.

Ya i have the rest mythic, but had 76 courage for 3 weeks now

I feel you, I’m down to needing 18 Courages (needed 23 until the previous post).

Try being down 1 courage and 9 Honor…for 5 weeks in a row for Guild Chests. Just to make mythic.

I feel for everyone. But it does mean more souls when I disenchant all those extras.

Same happened for me but with Humility. Took over 3,000 Seals for last 2.

This is purely some bad luck @DEMONorANGEL. Hopefully next time you are swimming in Courage!

We should do a ‘show me how many copies of the most guardians above mythic you have after getting all your guardians to mythic x 4’ leaderboard.

And I should attend a concise writing course.

For the record, mine is Sacrifice x 47!

your guardians to mythic x 4’ leaderboard.

I disenchant my extras for souls. However I saw someone show a screen shot of theirs at like 400ish for at least one of them and another at 800+.

We should do a ‘show me how many copies of the most guardians above mythic you have after getting all your guardians to mythic x 4’ leaderboard.

This thought occurred to me too, but I was waiting until I got my own final Courage before I started such a thread.

By all means, someone else is welcome to start it before I get to it. IMHO, it should consider highest single Guardian and highest total Guardians too.

Although, that is an awfully high starting point - I hope I don’t end up as bad as that, @Draprion!

800+ single mythic guardian? Are you sure, it sounds very unlikely. Or are you talking about any troop?

I don’t think 47 is going to be anywhere near the record.

Not too many extras 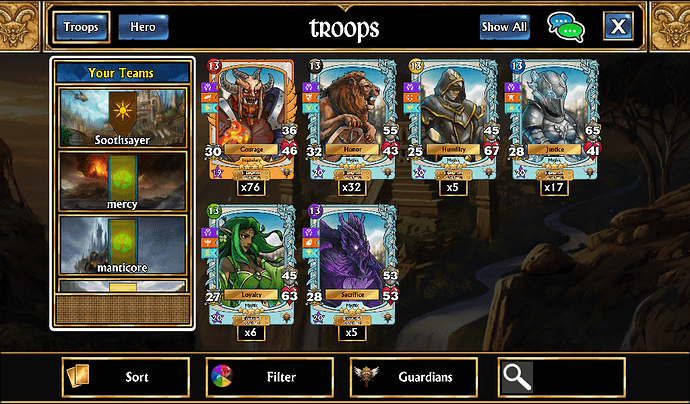 I got all of mine mythic this week and disenchanted already!

You will probably have a lot of extras by the time you’re done though.

My troops list is lousy with Humility, I got 66 of the little blighters before my 4th mythic Honour came along 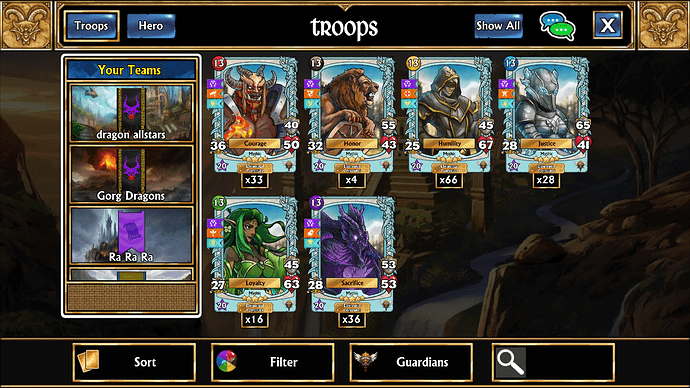 I’m in the same boat. I need 8 more Honor and already have 47 Humility and 65 Sacrifice.