As a person who was a professional translator for TV for 12 years, I can tell you with certainty that typos will happen a lot

Don’t take this the wrong way, but was this before the widespread availability of spellcheckers? I watch everything with subtitles on and I don’t remember the last time I spotted a typo in (English) non-hobbyist subtitles.

I won’t take it the wrong way, but I don’t think you actually understood what I was saying. Also, your question about spellcheckers shows that obviously you have never sat down and translated any serious amount of text with a deadline. Yes, I had spellcheckers, but they are just programs and they are not 100% mistake-free.

What I was saying with “typos will happen a lot” is that when you translate the text the first time, there is no way you will make it perfect and without typos. If someone says to you they can do it, they’re lying. You will read material several times and you will still miss things, especially when you have a close deadline. That is why I said that translators also need to have proofreaders. They will check the translation and spot the typos or grammar mistakes. Obviously, the developers of this game decided that they are not going to pay additional people to make sure the translation is adequate. I don’t understand that kind of thinking but it is what it is.

As for your not spotting typos, that is because when translations are done by a company, translators translate text, check it to the best of their ability and then send it to proofreader who will check it again. Usually, the proofreader is fellow translator who works on the same or similar translations. When I was translating The Walking Dead, my translations were proofread by other translators from the same pool, so they knew exactly how stuff should be translated. That gives you consistency.

After proofreader makes corrections, file is sent back to the translator who then decides if he will accept corrections or not. Sometimes, translation goes to second proofreader who then checks both translator and first proofreader. Then the file is sent to the subtitling department where I suspect subtitles are checked the last time before creating the finished subtitle file that goes to video. There are 3-4 checking steps (and yes, spell checkers are involved too) to make sure there are no typos. When you go with just one translator and then release the translation into the game immediately, of course there will be mistakes, and not small ones either.

Thanks for the detailed response, valuable insights.

Also, your question about spellcheckers shows that obviously you have never sat down and translated any serious amount of text with a deadline.

I have, as a matter of fact. I used to translate technical documentation, manuals and EU regulations concerning construction materials & tools from English to German

@Kafka okay here’s my last attempt to change these two cards in German, though the translation error lasts since years:
Gaard’s Avatar says (English): Burn Undead and silence Daemons
In German it is just the other way around, which is wrong! It says: Silence Undead and burn Daemons 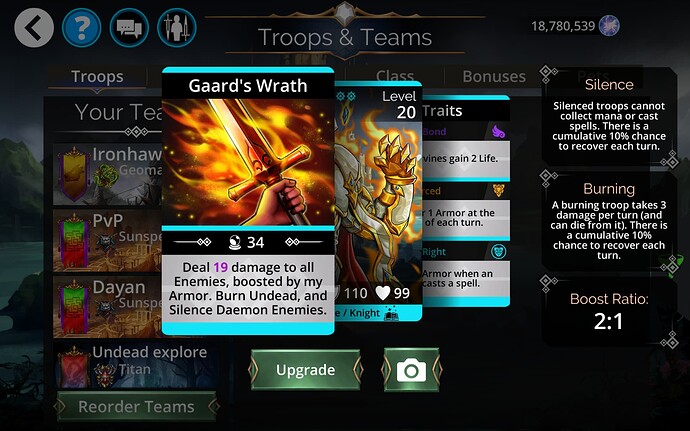 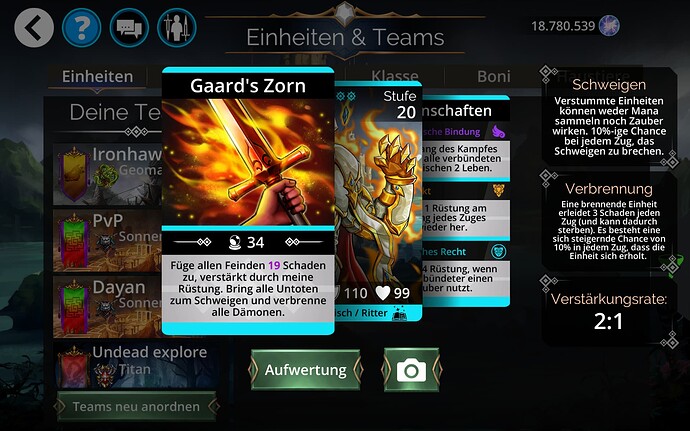 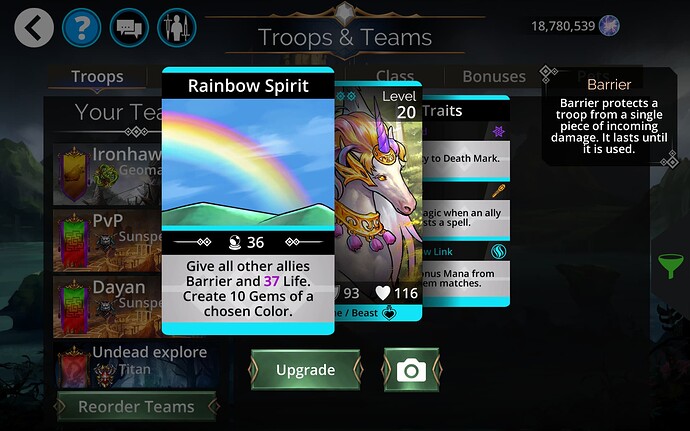 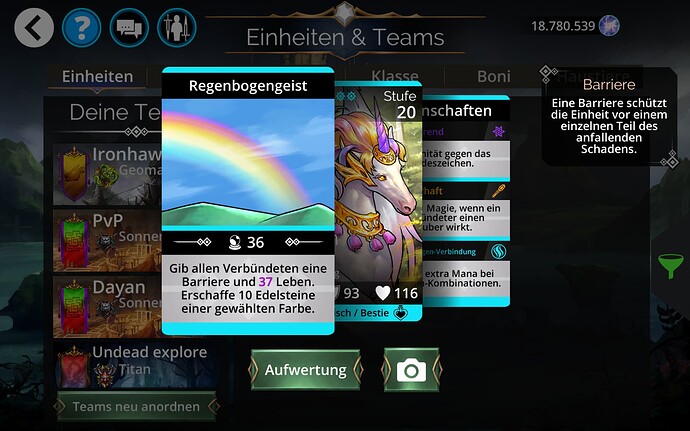 Thing is, it’s both colloquial and more complicated.

It would definitely be corrected in school unless it was used in a story format as someone saying it.

So it’s not technically wrong but still…

But it’s been translated by a native German speaker who also plays the game!

And this stuff, that’s the confusing game influencing stuff that should never ever happen.

Why are Daemons even called Dämonen? To be consistent with the oddness of the spelling they should be Daemonen as Dämonen is just demons.

German translation says the weapon explodes all gems, not just purple ones.

Thanks for the detailed response, valuable insights.

Also, your question about spellcheckers shows that obviously you have never sat down and translated any serious amount of text with a deadline.

I have, as a matter of fact. I used to translate technical documentation, manuals and EU regulations concerning construction materials & tools from English to German

well, then I apologize for assuming too much. But still, if you work, you make mistakes. That’s just a fact of life.

German translation says the weapon explodes all gems, not just purple ones.

I can see now why you would be upset about this. It’s not just a typo or poor grammar, this is blatant mistranslation which affects your gameplay. If devs don’t think THIS is a big deal, then I don’t expect anything to be solved.

My favorite one still exists:

Platform, device version and operating system: Here iOS but I guess it is any. Screenshot or image: [image] What you were expecting to happen, and what actually happened: All cursebreaker weapons show the same spell description. They should have all different spells instead (5 out of 6 are wrong). This is especially serious during this purple tower weak, as it leads you to believe the current one does a lot more damage to 2 opponents as it has magic*2. How often does this happen? When di…

I mean, this should be so obvious if you look at it just comparing the words without knowing the language at all.

Side note: The guild guardians are fixed by now (after a couple of years).

Side note: The guild guardians are fixed by now (after a couple of years). 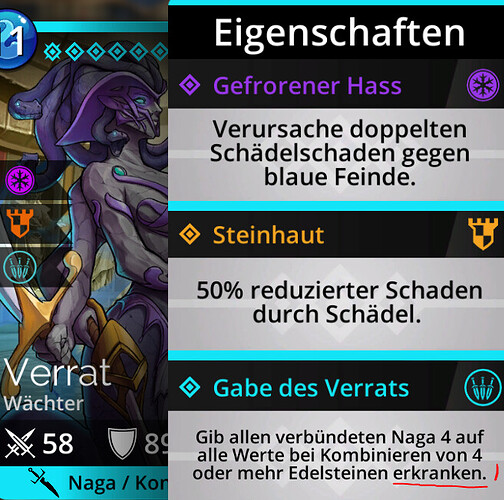 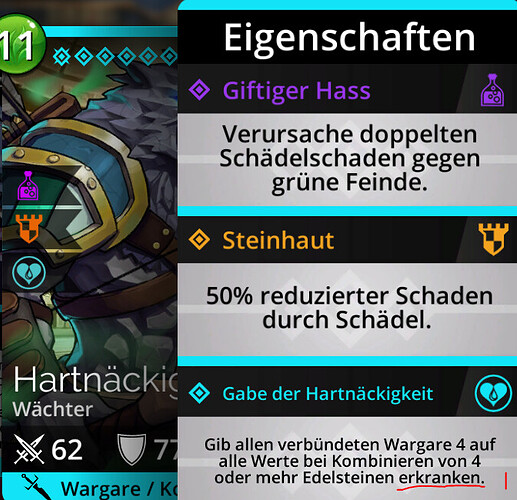 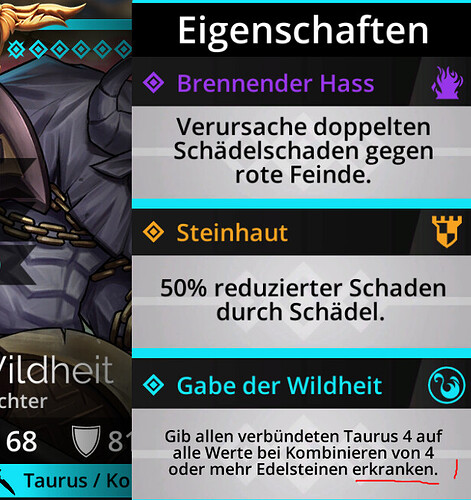 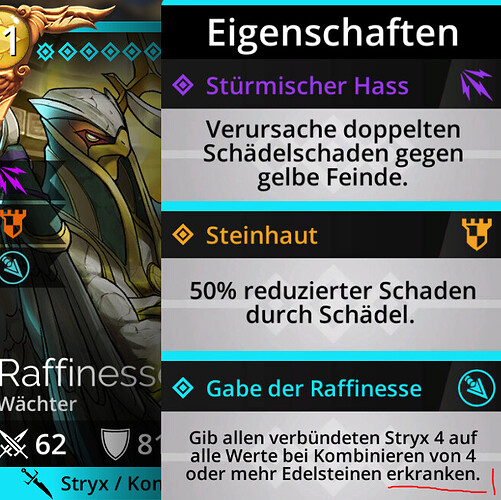 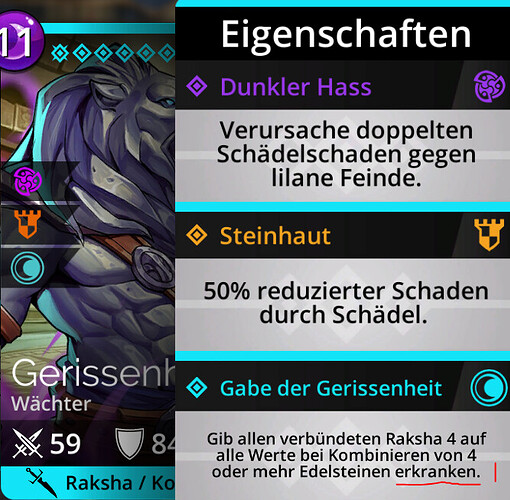 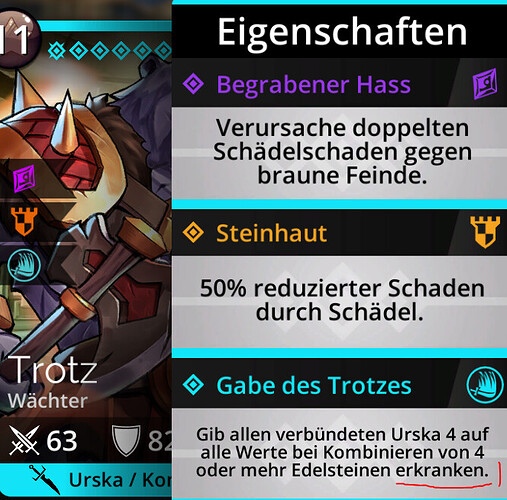 Give 4 to all Skills on all XY Allies when matching 4 or more Gems get sick.

But “Get Sick!” is funny, you can keep it that way

I’ll raise you a ‘When I is enraged’ 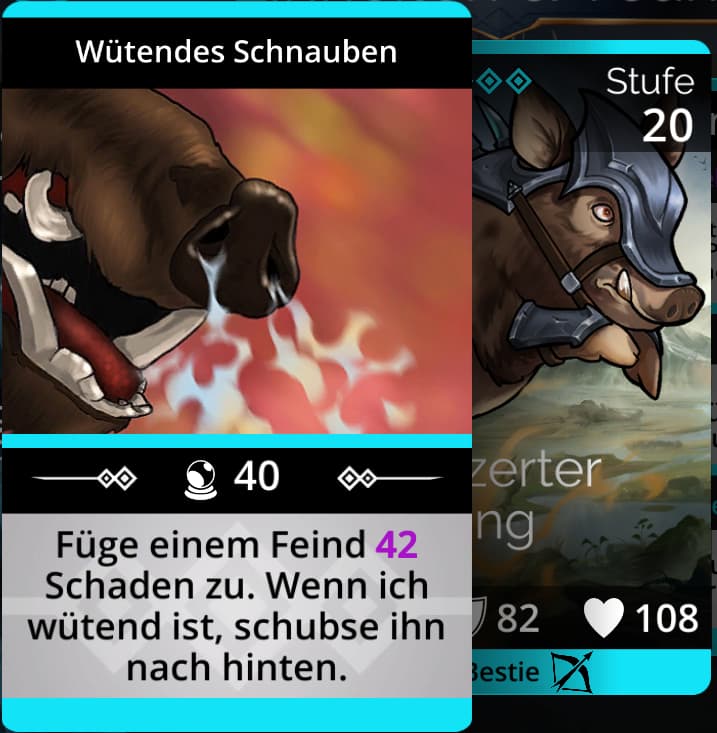 Ok, not sure - you’re right of course. I‘ve only looked at the numbers. Previously it was displayed that you get plus 6 instead of 4 on 4 maches. 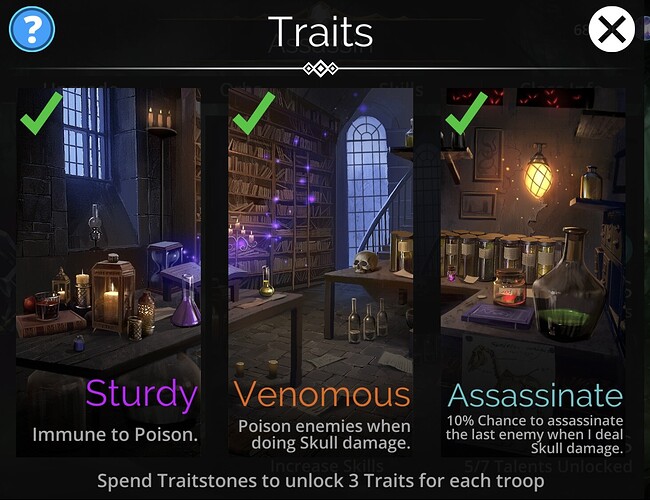 Venomous and Assassinate both say when doing skull damage. Assassinate explicitly states when I deal Skull damage (don‘t know why you need two different wordings for the same thing in one place). 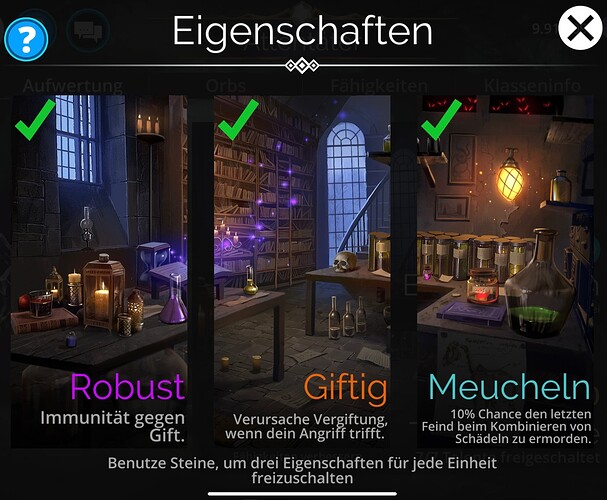 Giftig (venomous) says correctly if you hit with your attack but Meucheln (Assassinate) says kill chance if you combine skulls. There is no hint that the class needs to hit the opponent.

New Doomed Dirk is a Drik in German. What’s a Drik?

It’s Dirk in German as well since we don’t have our own word for that.

I know that’s a typo but it starts to feel like trolling.

The funny thing about that is:

How…
How can this typo even occur?

Anna: “No seriously, I need a translation here.”
Dirk: “Fiiiine. You remember the actor?”

Anna: “Yeah, you’re a real drik, Dirk. Thanks for nothing.”

Dolch would have worked - but we already have a Doomed dagger. A Dirk is a type of dagger, right? A Scottish one, I think.

Anyway, that was funny.

I’m sure the native German speaker was thinking that if you’re hungry you of course need to hunt, therefore hunter.