I think this is the biggest issue when climbing the ranks in guild wars. The lower brackets are just FULL of teams like this. One person in the guild, and they don’t even do their fights. If We could push those teams to the bottom, it would make climbing the ranks better.

In no way do I think my guild is ready for top ten or anything, My secondary guild is full of new people. I would love to be able to fight similar guilds instead of having to climb over the mountain of garbage. 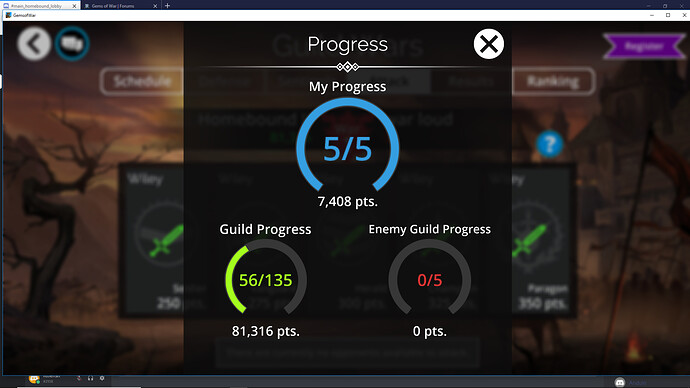 What’s weird about this is the registration system is SUPPOSED to cut down on this. If a guild isn’t active, they shouldn’t register, and thus they can’t participate.

But for some reason they register, then do nothing.

But for some reason they register, then do nothing.

It self registers the guild. The manual register thing was for like a month when GW first started. People would forget to register so ever since then the game does it for them.

If your guild scores 0 for the week it should drop you to the last bracket possible.

Guild wars has so many issues that constantly get pushed to the back burner. It’s easier to make it less often, rather than make it great.

It self registers the guild. The manual register thing was for like a month when GW first started. People would forget to register so ever since then game does it for them.

Huh, that explains it then. Pretty counter-productive.

I can do you one better. With screenshots from 3 week’s ago re: guild wars. But yeah, it’s something we’ve been dealing with … and are remaining patient on… (however frustrated we are about it). Thanks to personal follow-up conversations with @Cyrup and @Kafka

But I have to ask, devs: Wouldn’t turning OFF AUTO REGISTRATION BE A SIMPLE FIX (for now)!?

MAKE GUILDS REGISTER! That’s a hotfix-level issue, not a major overhaul. With all the reminders the game has under events and guild tabs to REGISTER anyway (even though the dead guilds haven’t had to this whole time anyway?!), this could help a very large number of guilds of all sizes advance at a more fair pace!

Here’s the wonderful fun we’re dealing with (from GW 3 weeks ago): 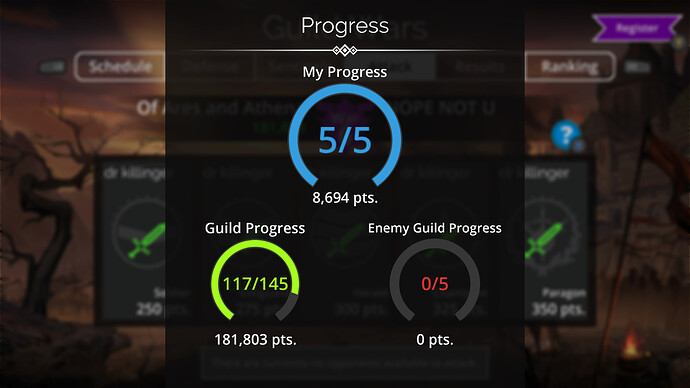 The second single member inactive guild for the week: 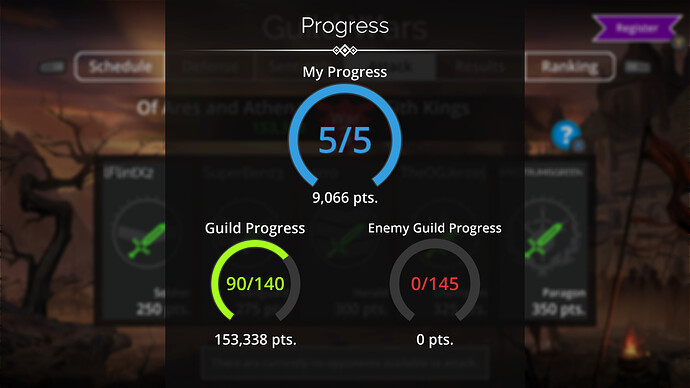 Look how much fun it must be for the guild’s we’re playing against to go against us (not to mention final scores like this have been the case for my guild for the last 100+ days that I’ve been a member.) 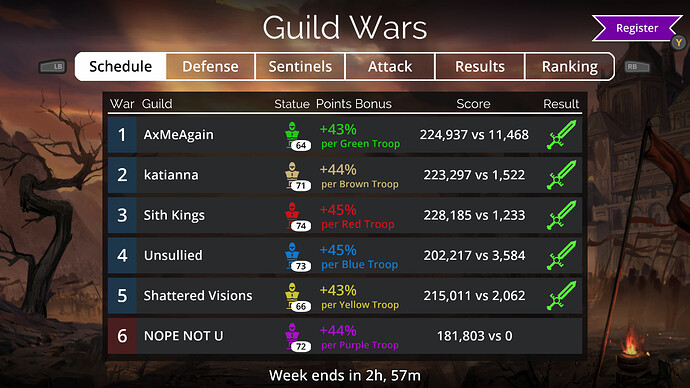 I’ll have to create another new post as well, since we didn’t even change brackets from 3 weeks ago, despite having the best score (1.3m) in bracket above, our bracket, and bracket below. Closest behind us was about 100,000 points. We’re still in Bracket 51 and we were last GW as well. EDIT: I take this back and my apologies, one of the screencaps cut off the part of the ‘4’ in 54. We did move up 3 brackets to 51 as we should have. Sorry, whew! No new forum post

I’ve added the feedback from this thread to our feedback report.

it self registers for a reason because opting out for a week or 2 can be advantageous when protecting your division position and 2 or 3 teams are short of players. one opts out, some players play in the other guilds that are short- guild position for all concerned is protected.

This is not regarded as collusion - this is a tactic.

Missing guild is reinstated back into original league - promoted team is penalised and does not take anyone’s place above them.

if everyone opted out strategically this would be difficult to administer so it auto-registers everyone to avoid this. And most people know this …

This is not a penalty either.

Since Guild Wars is coming up soon I will just comment here in order to bump this to the top of the page.

While I am looking forward to 3.5 I must say this should be fixed by now. I have nothing else to add as it has been beat to death but I am really starting to think nothing is going to fixed with this.

But hey we got pets right?