Some Suggestions for You

Hi everyone. I would like to begin by saying that I think this game is probably the best game I ever played on mobile. I’ve been playing just for about two months but it seems enjoyable. Having said that, I would like to express some suggestions which could make this game even greater.

Note: every suggestions is a personal opinion, not the thoughts of every player of the game:

I think i’m done for now. I thank you for reading all my suggestions and I hope you find them useful. I am sorry for my bad english but as you can notice, english is not my first language

Good starting point the 3.
Why they dont add a bonus at the start of the turn if there is whole team of a specific type? Like all giants , all elves… and so on…
The pet that we already have for every type of troops can be enabled for this. 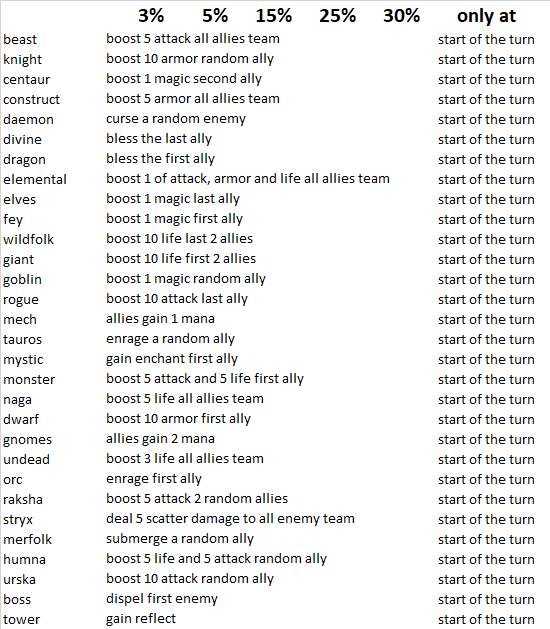 edit: % to trigger every turn

#1 and #2 actually are very common reactions, so you know.

Queen Beetrix has proven to be a top tier card and very difficult to shut down, partly because of that spell effect (16% of the time she gets half mana back AND an extra turn to fill the rest with, especially in combination with a mass exploder/generator like King Gobtruffle or Forest Troll) and the rest of the time because that pesky 3rd trait simply invalidates your attempts to keep her at bay.

Elementalist’s 3rd trait is also potentially too strong, not everyone can run Impervious/Blessed teams to defend against it. At least this class has the excuse of being relatively new…

I still haven’t used Elementalist outside of PvP/GW.