[Not a Bug] Soulforge maximum level

I finished level 20 in the soulforge. It says I should receive, Dark Smit Drenza, a Vault Key and a Power Orb. All I was able to craft was the power orb. 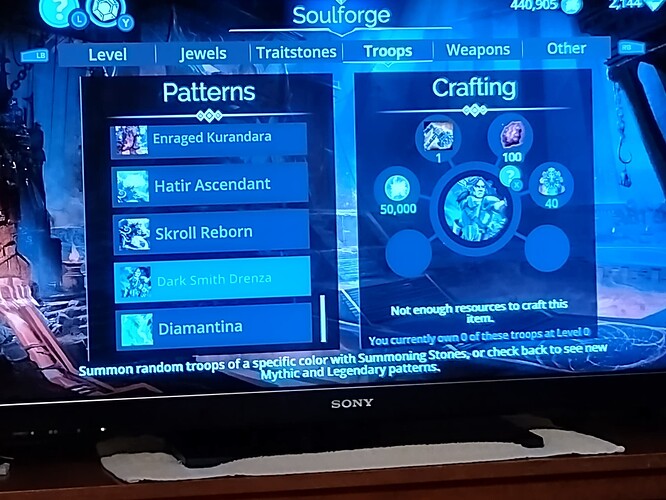 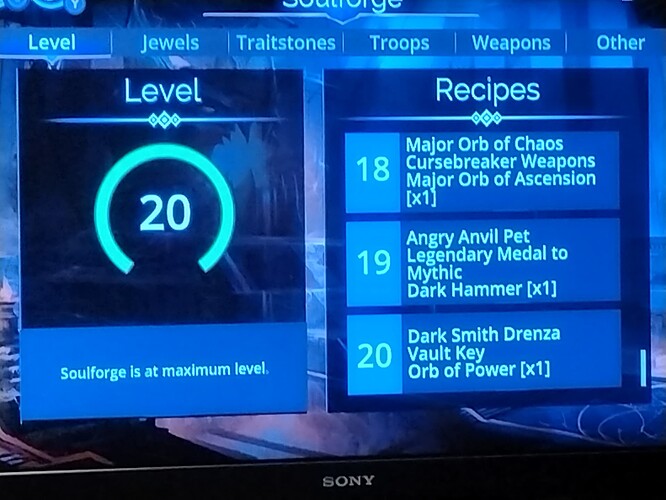 It says you unlock the ability to craft (not that you just get them for free) Vault Keys and Dark Smith Drenza, plus get a one time only Power Orb craft for whatever number of souls that was.

Everything is working correctly - it says right there in your screenshot not enough resources (Cursed Runes, most likely) for Drenza;
Vault Key is the last item under “Other” tab, have a peek to see if you own enough stuff for crafting those.

It’s gotta be the Cursed Runes, but it’s really hard to tell given the white-balance of your photo. It’s definitely NOT the Souls, and it’s not the Weapon or Traitstones (those would specify “/1” or “/40” if insufficient).

If you can get a color-corrected version of the photo (exact presets vary by camera, but I find that the one called “high fluorescent” seems to work well for screenshots) that will help.

My CSI enhancing of the image makes it seem like the colour of the requirement of the weapon is a slightly different hue then the others.

Except if that’s the case the weapon icon would say “0/1” instead of just “1” because this is standard for ingredients in small (<100) quantities.

If all four ingredients show up green and they are STILL unable to craft Drenza, then that would be a bug report.

Thanks everyone. No more replies
needed.