[Investigating] You will need to restart 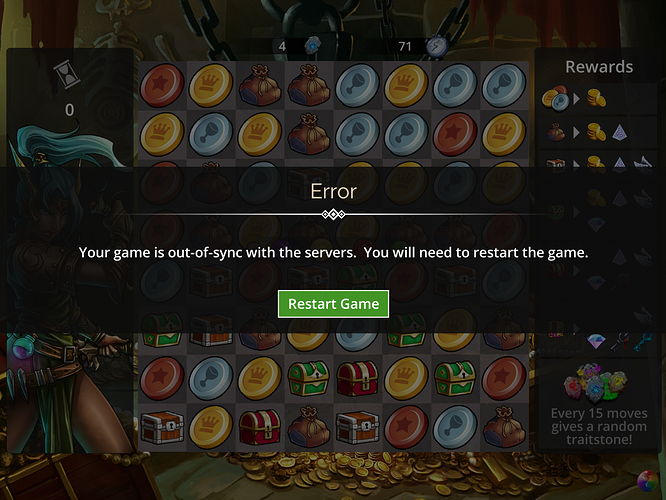 I was expecting to finish a Treasure Hunt and receive rewards, instead the game forced me to restart and abandon play.

It has been happening for well over a year.

The easiest way to reproduce the problem is to launch the game when tributes are pending and play a Treasure Hunt before collecting the tribute. Lately, it also seems to happen if a tribute becomes available while the user is playing a Treasure Hunt.

Hey, do you play on more than one device?
If so, which devices do you play on?
Do you exit the app between play sessions? (double click the home button and swipe Gems of War off the screen)

I only play on one device: iPad.
Sometimes I use force exit and sometimes not. It makes no difference; the critical part is whether I pick up a tribute before using a treasure map.

Info above as requested.

Thanks, does it happen any time of day or mostly around 7am GMT?
I have had this issue myself but at daily reset time.

Any time of day. It’s really easy to reproduce: start up the game when there’s a tribute waiting to be collected, ignore it and start a treasure hunt instead.

I have to point out one thing as well. It’s also happening on PC - Steam client, so its probably widespread.

For example, on PC, I had the exact same issue, and it happened when I collected two Vaults.
I started to believe in conspiracies since then.

I think that this can happen during the hourly tribute, while you’re still in the Treasure Hunt mode.
It’s been the case for me, at least, but that would mean avoid playing this game mode before the Tribute arrival, otherwise you could get this message.