This is what happens when then numbers are wrong with the invasion stages each time.

Can we get some consecutive numbers here?

Why do the raids stay the same but the invasions keep acting up?

Platform, device version and operating system PC What you were expecting to happen, and what actually happened Invasion rewards require too few tower kills. It looks like the intended number should actually be the sum of all preceding numbers, e.g. kills required for reward 11 should be the kills for reward 1 to 11 instead of 300. How often does this happen? When did it begin happening? This weeks Invasion. It’s actually the reverse bug of the previous Invasion, were totals for kills were s…

Edit. Last time when the numbers were wrong they did send out a compensation pack, so it would only make sense if they did it again. @Cyrup, what does the dev team think of all of this?

For just guessing, it’s maybe not something like that, more about the complicated easy-but-messy codes they’re using right now.

They seemed to only have to enter single data to the formula they created, which is the total number of towers to complete the event (5,250).

But the first week, the formular is working incorrectly, it spread the total number, but not stop there, also sum up requirement for each stage in to the next one. So it ended up bumping number by showing number of tower required in each stage at total (5-15-30 instead of 5-10-15) as @Mithran pointed out in other post. So the number added up so quick in latter stages, ended up in 16,935 total, very much higher than intended 5,250. So they fixed the formula to work and display correctly, by spreading out 5,250 along 12 stages, in increasing numbers (5-10-15…1,400).

Now in the second week, the formular is correct now, but that single data entry is wrong. Somehow they input total numbers of stage 12 (1,400) instead of real total combined numbers (5,250). So that 1,400 ended up speading in 12 stages, making ovarall requirement a lot lower, giving free unintented stuffs each stages in the process.

I hope they’re more careful with the number they input now, consider there is nothing wrong with the formula again.

Invasions feedback and suggestions? How about give us a week where something ain’t all f’d up

Does anyone know what the last reward is for clearing stage 8? Is it a major chaos orb?
I don’t think I cleared it the last time. 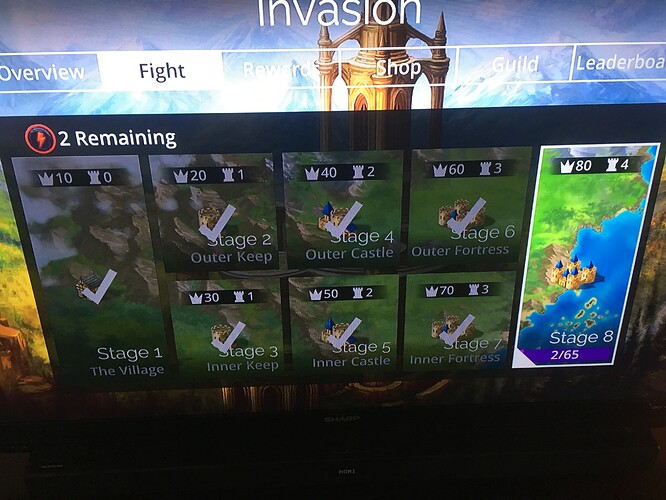 There is no reward. The rewards show up in the top right corner. Stage 8 just tracks until you get to the end and repeat the same battle over. At least that’s how it worked three weeks on the initial invasion. Since I don’t see any rewards in the upper right, I am confident that it’s the same.

Every other stage completed had a reward with it sent to the mail, stage 7 was a minor orb of chaos.

You should get event stage rewards and guild rewards. 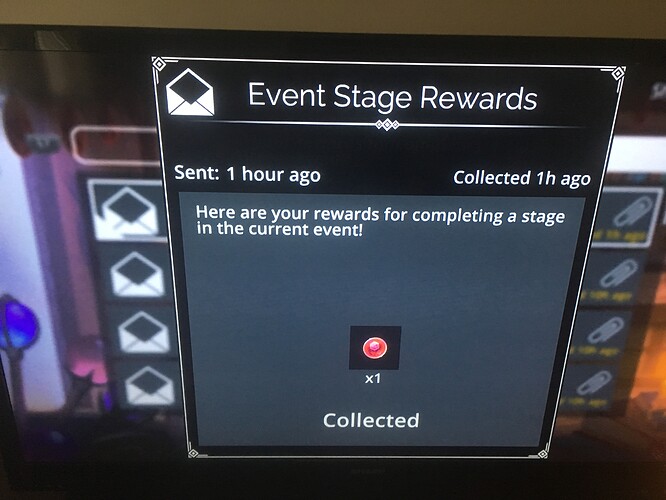 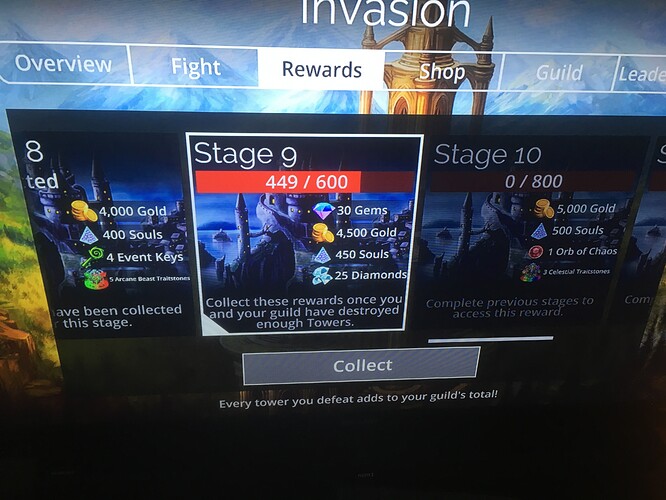 Sirrian mentionned they will do something about that

Real soon™ now. The team is just testing before they deploy… shouldn’t be too long. An hour or two I would guess. No SOLO rewards past last stage is correct, as it doesn’t technically end at the 65th battle. We might look at changing that in the next invasion though. As for compensation… .we don’t really have a good way to compensate that right now directly with energy, but we’ll examine another way to get some compensation out.

Ok, so there is no point in trying to fill up stage 8 then?

Thx @Rickygervais for the info.

Why not give raids individual rewards also? Why have invasions pay out more rewards (65 gems and an orb) than raids? Everything else about the two modes is practically identical except for the rewards?

Why not give raids individual rewards also? Why have invasions pay out more rewards (65 gems and an orb) than raids? Everything else about the two modes is practically identical except for the rewards?

This is an interesting question, but if you think about it each mode is like an experiment.

I think it really comes down to that the Raid Boss battles are the best one for disinterested people to avoid. Invasions are set up to require the whole guild to join in.

My main issue with the Invasion is its last stage 8 when there are 4 towers. IMO, the whole mode is pretty dull. Towers all look the same and have very similar spells with minor differences. They are also immune to everything apart from damage. Since the point of elemental class is to burn or freeze something, this makes half of the cool things obsolete. So, to me it seems like sort of crippled arena with less variety and same enemies over and over again.

There is no way to rationally put any breaks on random AI cascades as well. In one match, I had all towers powered up by turn 3. Still was able to win somehow but it was a chore. There are some serious issues with balance in the latest stages of this new Invasion mode. It gets boring pretty fast for me and I secretly hope I don’t get more sigils and won’t have to do more battles.

Our guild participation in Invasion is taking a deep dive this week as well compared to last time so far. It might get better closer to the weekend and IDK about global stats. Some players do really like it though and spend quite a few gems.

Tier 5 and so close. I think I had under 5 losses total. 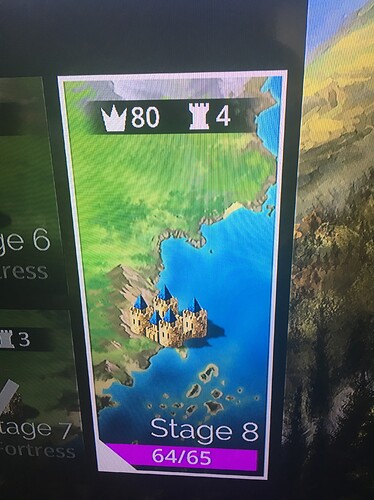 Took me to the top 50, how are the other servers looking? 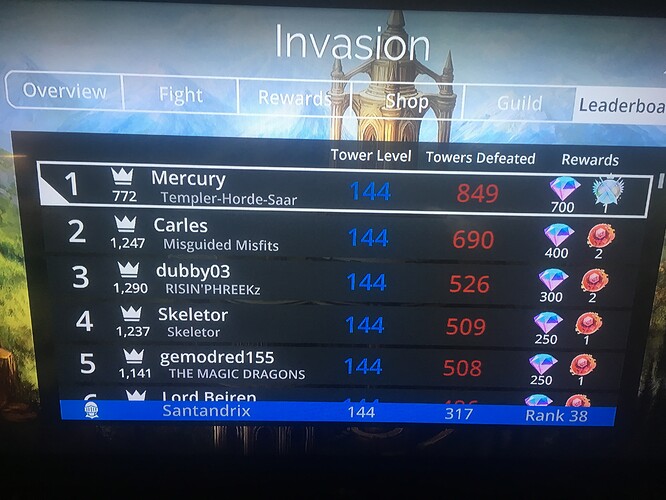 the whole mode is pretty dull.

Towers all look the same and have very similar spells with minor differences.

this makes half of the cool things obsolete.

it was a chore.

It gets boring pretty fast for me and I secretly hope I don’t get more sigils and won’t have to do more battles.

agree on all counts.
BORING!

Yep, I agree, these new modes feel like a chore with little rewards, thankfully next week is guild wars.

Now that it’s been 2 cycles of these new modes I kind of would like it if they went back to guild wars weekly and did these modes once a month.

One month gets a raid and the next month would get a invasion, perfect.

Being a guild leader I can definitely tell that the players interests In this game have dropped but that’s usually how it goes every time they update the game.

Maybe the whole point of the new events was just to make us like Guild War more by comparison?

This a million times.

Once I reached level 4 the Invasion became a chore. The only thing that determines if I win is whether the skulls align for me or not. This morning, the towers were executing my party with 3-4 free turns at a rate of 1.1 ally per turn.

It is very realistic that I will quit the game on an Invasion Sunday. It’d be nice if there was just ONE THING that worked against them aside from “hope for lots of skulls” or “hope you have the mythics”.

Maybe there could be a troop with a trait called “Siegebreaker” that does something helpful on the event week? That’d be pretty neat. It could like, do a status ailment the towers aren’t immune to? Maybe the devs can work on that.

Agreed that Raid/Invasion feels more like a chore than something that’s actually fun. At the very least can you please add trophies to these modes? Raid/Invasion weeks takes up a lot more time than Guild Wars and I feel more pressured to complete the other stuff (Event rewards, trophy requirements, etc) and still have time left over to enjoy other things in life.

At the very least can you please add trophies to these modes?

YES!
I think alot of the gripes would disappear if we can get trophies and seals from these raid battles like we do from GW battles. Many guilds have trophy/seals weekly requirement, and these raids are taking up too much time away.