Gems of War is Coming to Amazon!

You read that correctly! We are very excited to bring Gems of War to Amazon! We have been asked many times in the past to bring the game to this platform, and we have been planning to for a long time. Now, it’s release is upon us!

It will be releasing on the 15th of May in America. When we have a link to the app I will pop it here for you all. I have word from the programmers that you will be able to link your Amazon account to your mobile and PC accounts as they are on the same server. Woohoo!

(Unfortunately, these accounts still can’t be linked to console due to legal issues.)

You can find it on Amazon here!!!

Still… No plans for the Nintendo switch?

Aha. Good new for my kids. Except that they won’t be able to link to their PS4 account

I’m getting more convinced the lack of interplatform account linking for consoles and lack of code equivalent gifts is a conspiracy to entice us play other games on our consoles. I can only assume hostages are involved from both microsoft and sony. If you need help, send us console players a coded message, preferably in some form of redeemable gift. It may be the only way to get out your distress call.

On a side note, I can’t help but laugh at the thought of yelling “ALEXA FETCH ME MY TRIBUTE!”.

What an exciting news!

It makes Fire Tablet able to play GoW… and?

Congratulations on the impending launch, I guess.

Next any chance for the lovely PS Vita?

I’m getting more convinced the lack of interplatform account linking for consoles and lack of code equivalent gifts is a conspiracy to entice us play other games on our consoles.

Can you compile a list of games that have compatible cross-play between XBox(360|One), PS(3|4), PC, iOS, and Android? Will that list be long enough to count on two hands?

It is a conspiracy. Microsoft does NOT want you to be able to play games with your PS4 friends. Microsoft wants your friends to buy an XBox One so they can play with you because you’re so popular. But Sony has the same dastardly plan: they know XBO owners wish they had a PS4 and don’t want to offer any comfort. MEANWHILE, Microsoft also doesn’t want XBO /PC crossplay to be widespread because then they compete with themselves: most of the time it is more convenient to play a game on PC as opposed to a console, which is especially true now that there are Windows tablets. MEANWHILE, neither Sony nor MS wants you to be happy you can use your iOS/Android tablet to play with your XBO/PS4 friends: that might encourage you to NOT buy a PS4/XBO. MEANWHILE… get the picture?

Cross-play is a feature that video game companies have violently argued we don’t want since the Dreamcast made it a question. Valve has even performed studies to show that, in their opinion, console gamers look like total n00bs compared to PC gamers therefore please stop making Half-Life 3 jokes and get on with buying $600 worth of games in the Steam Summer Sale.

The tech is there and easy. No platform wants to allow its developers to do it across the board. Believe me, for the companies who DON’T make the console the benefits would be great, but they’re beholden by the console/mobile licensing that won’t allow it.

You can use remote play to play on your Vita. A number of my guildmates do this.

I understand, I made that post as a joke if I didn’t make it clear with the hostage comment. Obviously it would be great, but for the many reasons that you have done the liberty of stating for me, they won’t. Obviously true cross platform play is practically non-existent when you look at the games that are simply available on all or most platforms. I even think most people understand that, they just still want to dream it even though if we got our wish it would be a nightmare for many, many reasons. But as for my ealier comment, they won’t and… 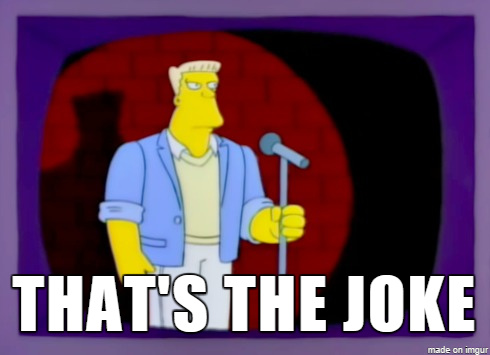 . I even think most people understand that, they just still want to dream it even though if we got our wish it would be a nightmare for many, many reasons. But as for my ealier comment, they won’t and…

Please DM that photo! It’ll come in handy in my future misunderstandings.

Idk if I really want to play on Switch… Or just want to see the world burn when Switch can cross play with PC/mobile despite it being a console as well. And if you think I’m serious…
See above photo^^^

Honestly I just wanted to rant about how stupid it is that cross-play isn’t more widespread in video gaming. There are a lot of circular feedback loops.

Switch is, effectively, a mobile gaming platform. It doesn’t have the same problem that separates consoles from PC/Mobile: I can pick it up and it’s running the game in less than 2s, just like on my iPhone. Honestly if the game actually sent server requests on wake like it should, mobile would make PC look clunky.

Thanks, i know - i am playing allready most of the time remote (Xperia Z3 Tablet + Dualshock 4), but in this way i allways need a running PS4 an a very good WLAN connection to it.
So a native Vita-Client without this dependences would be fantastic and the pure Vita-Hardware fits perfect for Gems i think.
… Rumors say although the Vita production is down, Sony is still very cooperative about Vita-Versions of exisiting PSN Games. But the time is ticking